by peteblack4ua@gmail.com | Jan 10, 2023 | Courage, Determination Despite the Odds, Underdogs | 2 comments 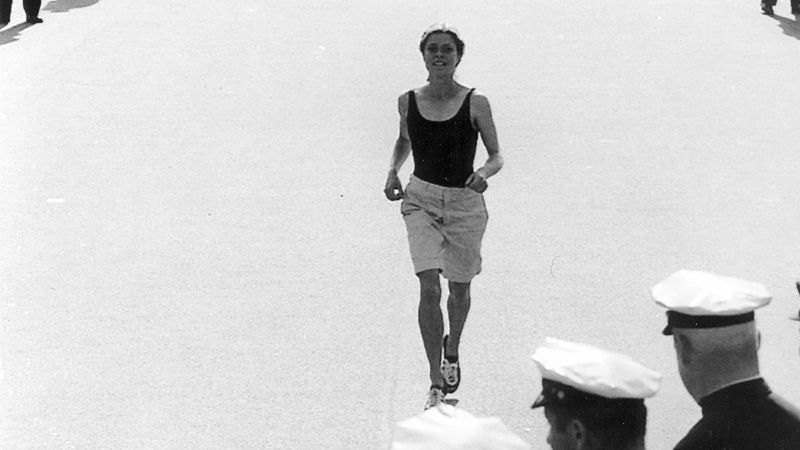 “Many great things have begun with a single act of courage throughout history and today. A person steps out and makes one courageous decision and that one domino starts many other dominoes falling.”                  Andy Stanley

April 19, 1964 – Boston, Massachusetts: Bobbi Gibb watched the Boston Marathon for the first time on a cold drizzly day. She was awed by the idea of pushing her body to exhaustion. That day the 21-year-old college student knew she had to run Boston. She also knew that since it began in April 1897, only men had run the race. There was no women’s division.

Bobbi, who grew up in the suburbs of Boston, trained for the marathon for two years. She ran in leather Red Cross nursing shoes because there were no running shoes for women. She had no coach, no how-to books and was afraid that she could die from exhaustion by running long distances. Bobbi tested the waters by gradually running longer distances. She eventually ran the marathon distance with no adverse effects.

In February 1966, Bobbi, then a University of California, San Diego student wrote for a Boston application. Race Director, Will Cloney, sent her a letter explaining that Boston was a men’s race and that women were not physically capable of running that far. Allowing a woman to run the Boston Marathon was a huge liability.

Bobbi was angry and more determined than ever to run the race. After three days on a bus from San Diego, she arrived in Boston the day before the 1966 marathon. The next morning her mother dropped her off near the starting line. She wore her brother’s basketball sneakers, Bermuda shorts, and hooded sweatshirt over her black swimsuit. Bobbi hid in the bushes near the starting line. She waited until about half the runners had passed before jumping into the race.

It didn’t take long for the male runners to figure out the 23-year-old petite blond wasn’t a man. So, she removed her hood, and spectators realized a woman was in the race. To her relief and surprise, they erupted with a roar and began cheering for her. By the time Bobbi reached the 12-mile mark at all-female Wellesley College, the news of her running had spread, and the girls were jumping and screaming.

When she completed the marathon, the governor of Massachusetts, John Volpe, was there to greet her. She finished in three hours and 21 minutes, faster than two-thirds of the 415 male runners.

The controversy surrounding her illegal entry was just beginning. Race Director Cloney remarked, “Mrs. Gibb did not officially run in the marathon. There is no such thing as a marathon for women. How do we know she even ran the race? For all I know, she could have jumped in near the finish line.” There was no trophy or recognition by the marathon of Bobbi’s race.

In 2021, a statue of Bobbi called “The Girl Who Ran” was erected at the Hopkinton Center for the Arts near the marathon start. Bobbi, an artist and sculptor was asked to create her statue.

Today, 80-year-old Bobbi Gibb divides her time between Boston and San Diego and is a regular at the Boston Marathon. She still runs for an hour most days. An author of several books, including her memoir Wind in the Fire, she was inducted into the Road Runners Club of America Long Distance Running Hall of Fame.

Bobbi’s daring run in the Boston Marathon on a cool, sunny day in April 1966 helped knock down barriers for women. “I wasn’t making a social statement,” she winks, “I just wanted to run the marathon.” In 2022, more than 8,000 women completed the Boston Marathon.