by peteblack4ua@gmail.com | Aug 13, 2018 | Chasing Your Dream, Determination Despite the Odds, Long Shots | 3 comments 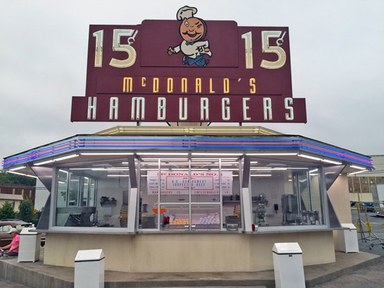 1954 – At a phone booth in central Missouri: Ray Kroc phoned his corporate office. He thought there had to be a mistake. He had received an order for eight milkshake machines from a San Bernardino, California restaurant. But, the order was correct. Kroc, who had sold paper and equipment to restaurants for more than 30 years, had seen more than his share of bad restaurants. What kind of restaurant makes eight milkshakes at a time? He had to find out. He pulled out his map – 1,782 miles to San Bernardino.

The son of an unsuccessful real estate salesman who had emigrated from Czechoslovakia, Ray Kroc grew up in Oak Park, Illinois, a suburb of Chicago. At 15, Kroc, like another Oak Park teen, writer Ernest Hemingway, dropped out of high school to become a Red Cross ambulance driver during World War I. After the war, he joined the Lilly Tulip Cup Company and sold paper cups for 16 years.

In 1937 after seeing a machine that mixed multiple milkshakes at a time, Kroc quit his job as Midwest sales manager and convinced his wife that he could get rich selling these wonder machines. So he went to work for the Prince Castle Company and for 17 years drove around the country selling the mixers out of the trunk of his car. The job paid the bills, most months.

Two days after receiving the unusual order for eight milkshake machines, Kroc pulled up at the McDonald brother’s restaurant in San Bernardino. He was amazed. People were lined up at the order window – to buy hamburgers, french fries, and milkshakes. Orders were ready in 30 seconds, not 30 minutes. Kroc had never seen a restaurant this organized and efficient. After enjoying the best fries of his life, he met Dick and Mac McDonald.

Instead of a hamburger joint, Kroc saw a gold mine. But the brothers, who already had three mediocre franchises in Southern California, weren’t interested in Kroc’s wild idea to take the restaurant coast to coast. Kroc called Dick a week later, but the answer was still no. After many calls and another trip to San Bernardino, Kroc persuaded the McDonalds to make him their exclusive franchise agent. They agreed to a half percent of gross sales.

When Kroc told his wife that he was quitting his job and buying a McDonald’s franchise, he promised her they would be rich. She ran to the bedroom and cried. On April 15, 1955, 52-year-old Ray Kroc opened his first McDonald’s in Des Plaines, Illinois. Within a year he opened a second franchise in his hometown of Oak Park. By 1960 Kroc had franchised 250 restaurants across the country when he bought the McDonald brother’s interest for $2.7 million.

Humorist Lewis Grizzard once joked, “Life has really changed; we used to go the bathroom outside and eat inside. Now we go to the bathroom inside and eat outside.” Ray Kroc, the Father of Fast Food, is mostly responsible for changing the eating habits of America. How did a high school dropout, paper-cup-and-milk-shake-machine-salesman do it? Two words – vision and persistence!

“The two most important requirements for success are: first, being in the right place at the right time, and second, doing something about it.”       Ray Kroc