by peteblack4ua@gmail.com | Oct 21, 2019 | Against the Odds, Chasing Your Dream, Determination Despite the Odds | 3 comments 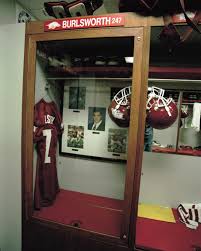 August 1994 – University of Arkansas, Fayetteville, Arkansas: After practice, Arkansas Head Football Coach Danny Ford asked recruiting coach Harold Horton, “Who is that fat kid?” Ford was informed that the 6’2” 310-pound freshman walk-on guard was Brandon Burlsworth from Harrison, Arkansas. Ford shook his head, “Hell, he won’t ever make it!” Horton responded, “Coach, Burlsworth’s older brother Marty called me almost every day about a walk-on spot for him…he was 3A All-State… and Coach, he has a big heart.”

Brandon Burlsworth was born in 1976 in Harrison, Arkansas, in the foothills of the Ozark Mountains. His parents divorced when he was two leaving his mom to raise him and two teenage brothers. Brandon learned how to call the hogs – Arkansas Razorback style – and as a child dreamed of one day wearing the red razorback jersey.

As a six-foot, 160-pound sophomore guard, Brandon drew lots of laughs and nasty comments from his high school teammates at Harrison High when he announced in the locker room that he was going to play football at the University of Arkansas. At the time he didn’t even start for the Golden Goblins.

By his junior year Brandon had gained 80 pounds. He started that season at guard and earned all-district honors. The coach opened the weight room every morning at 6:15 am so Brandon could lift weights before school. As a senior, he stood 6’2” weighed 300 pounds and made the all-state team.

When Marty began to call Coach Horton about a scholarship for his younger brother, Horton was emphatic, “Good high school size, but too small and too slow for division one football. Try a smaller college.” Three Arkansas small colleges, including Ouachita Baptist University, were interested, but little brother dreamed of playing for the Razorbacks. Marty began to pester Horton about a walk-on opportunity and finally wore him down.

During Brandon’s freshman season at Arkansas, he dropped 60 pounds of fat and added 60 pounds of muscle to build a 6’ 3” 310-pound D1 lineman body. As a sophomore, he earned the scholarship he had long dreamed about and started at right guard. His junior year he was voted first-team All-Southeastern Conference guard.

Houston Nutt became the new head coach at Arkansas before Brandon’s senior year in 1998. One night when leaving his office at 9 pm, Nutt heard someone in the weight room and discovered Brandon working out. Nutt coined the term “Do it Burls Way” as the team motto. That season Brandon helped lead the Razorbacks to a 9-3 season and was voted All-SEC and All-American.

Brandon Burlsworth ran the fastest 40-yard time, 4.88, ever run by a lineman at the National Football League combine. In April 1999, the Baltimore Colts drafted him in the third round – the first guard taken in the draft. They planned to start him at right guard as a rookie.

On Wednesday, April 28, 11 days after the NFL draft, Brandon was driving from Fayetteville to Harrison to go to church with his mother. He was killed in a head-on collision with an 18-wheeler a few miles from home. That Fall Arkansas retired Brandon Burlsworth’s jersey number 77, only the second jersey to ever be retired by the school.

After his death, family and friends created the Brandon Burlsworth Foundation to honor Brandon’s work ethic and Christian values. The foundation buys 30 tickets to each home game to give underprivileged children a chance to attend games. It also provides 18 scholarships annually to students from small towns in Arkansas.

In 2013, Bleacher Report voted Brandon Burlsworth the greatest walk-on of the BCS football era. Each year the Burlsworth trophy is presented to the top college football walk-on.

Today, in the corner of the Razorback locker room sits Brandon Burlsworth football locker with his helmet and jersey. It is encased in glass with a sign above it which reads, “Do it Burls Way,” a silent reminder to all who pass to never give up on their dreams.