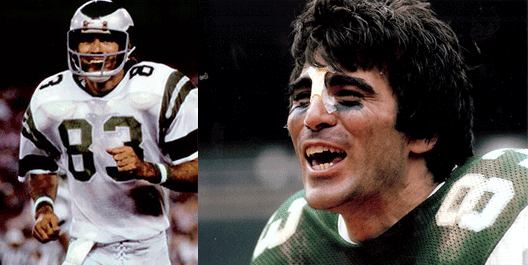 “Nothing reduces the odds against you like ignoring them.”            Robert Brault

Papale grew up in Glenolden, a Philadelphia blue-collar neighborhood. His father, a sheet metal worker in a steel mill, shared a love for the Eagles with his young son. Growing up, Papale was always the smallest but fastest kid in school. The 5’6” and 145-pound Papale finished fifth in the state pole vault as a high school senior.

On a track scholarship, Papale attended St. Joseph’s College in Philadelphia and competed in the long jump, triple jump, 400-meter hurdles and pole vault. After earning a business degree, he returned to Interboro High School as a teacher and junior high track coach. While playing in a Philadelphia touch football league sponsored by local pubs, he led the league in receiving and made the all-star team. Papale’s success led him to a semi-pro club, which played on Saturday nights at high school football fields and paid players $50 and a six-pack of beer each game.

Two years before Vermeil arrived in Philadelphia, the World Football League, a startup professional league, formed. To the amazement of his buddies, Papale made the team as a wide receiver. He caught a dozen passes before the league folded halfway through the 1975 season. He made $16,000, about $4,000 more than his teaching job.

When Dick Vermeil held his tryout camp Papale, now at 6’2” and 195 pounds, decided to give it a shot after a buddy told him he had “one in a gazillion chances to make the team.” The first time the coaches timed him at 40 yards, they assumed the stopwatch was wrong and made him run again. Once again, he ran a 4.5-second time, the fastest at the tryout. Although Papale survived 12 brutal days of two-a-day practices and made three player cuts, no one on the team took him seriously, that is until he made the final roster in early September.

On September 19, 1976, 30-year-old Vince Papale became the oldest rookie to ever play in the National Football League. In a made-for-Hollywood moment, Papale ran the length of the field when the Eagles came out of the locker room. He stopped in the end zone and pointed to Section 724, where his dad and his “gazillion-to-one” buddy were going crazy. During the fourth quarter, Papale returned a fumble for a touchdown, clinching Vermeil’s first win for the Eagles.

Vince Papale played three seasons for the Eagles, mostly on special teams. In his second season his teammates elected him special teams captain because of his kamikaze–style of play. He played like a guy who did not know how long his career would last. When the movie “Rocky” premiered in 1976, the Eagles’ fans were already cheering for their Rocky Balboa in football cleats.

“Vince Papale was a 30-year-old rookie with no right to be on the team,” said Dick Vermeil. “He only got invited to training camp to fill out the numbers. We signed a local schoolteacher to a football contract and his tough, hard-nosed, don’t-tell-me-I-can’t-do-it attitude inspired a whole city.” Vermeil took the Philadelphia Eagles to the Super Bowl XV where they lost to the Oakland Raiders.

Today Vince and his wife, Janet, a former member of the 1970-73 U.S. World gymnastics team, live in Cherry Hill, New Jersey. Vince, now 75, retired from Sallie Mae Bank, where he was a senior account executive. He remains a diehard Eagles fan and season ticket holder.