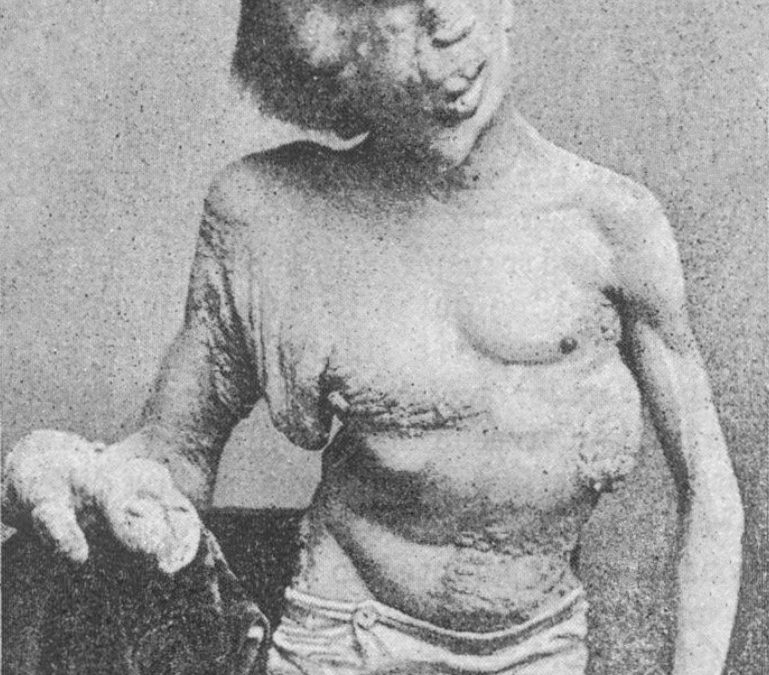 June 24, 1886 – Brussels, Belgium: Joseph Merrick borrowed money to buy a train ticket and arrived in Leicester, England, the following day. He had no money, no hope and nowhere to go. Joseph walked in the rain to the London Hospital, the only place that might help him.

When Joseph Merrick was two years old, to his mother’s horror, a piece of flesh resembling a snout began to grow from under the child’s upper lip. By the time he was school age, the protuberance was four inches long, and the butt of cruel jokes. At age 11, Joseph’s mother died, and his new stepmother refused to allow him to live in her house.

Alone and on the streets, Joseph found work in a cigar shop. His facial deformities grew steadily worse, and his right hand began to deform. At age 15, Joseph’s paddle-like hand interfered with his job performance, and he was fired. When he wandered the streets of Leicester begging for food, women screamed in horror at the sight of his face. Shop owners ordered him away from their businesses, and restaurants refused to serve the scary young man.

In 1884, demoralized and desperate, Joseph joined Tom Norman’s White Chapel Freak Show and became the star of the show. By then, he had a large misshapen head with bony lumps the size of small oranges on his forehead. His eight-inch snout made his speech almost impossible to understand. Gray, cauliflower-like growths developed on his face and neck and hung in folds not unlike an elephant.

“Ladies and gentlemen brace yourselves to witness one who is probably the most remarkable human being ever to draw the breath of life,” barked the showman.  “Please meet Mr. Joseph Merrick, the Elephant Man. Half-man and half-elephant, he is not here to frighten you but to enlighten you.”

After paying a three-cent entry fee, curious onlookers were allowed to gawk at Joseph, the prize exhibit in the show. When the stage curtain opened, spectators expected to see an enormous man. Instead, they gazed upon a shy, frightened 5’ 2” man, cowering shamefully in his bed.

Dr. Frederick Treves, a 31-year-old surgeon at the London Hospital Medical College, heard about Joseph and was intrigued with his unusual anomalies. With Norman’s permission, Treves brought Joseph to the hospital, photographed and analyzed the severe abnormalities, then returned him to the show. Joseph didn’t forget Treves kindness.

The following year, when the police closed down Norman’s exhibition, Joseph was sold to a traveling European freak show. During a stop in Brussels, the show’s manager robbed Joseph of his $5,000 in savings and left him on the street.

In 1886, desperate and broke, Joseph decided to ask Dr. Treves for help. When he arrived at the hospital, he presented the soggy, crumpled business card Dr. Treves had given him. It had been in his pocket for two years. Treves persuaded hospital officials to allow Joseph to stay in a small storage room in the hospital attic. Then he surgically removed Joseph’s snout and learned to communicate with him. To Treve’s surprise, Joseph was well read and intelligent and the two became friends.

The London Times ran a picture and a story of the unusual man. Donations and letters of support poured in. With the money, the hospital built a two-room apartment in a small courtyard on the hospital grounds and committed to Joseph that he could live there for the rest of his life.

Following the newspaper story, Joseph became something of a celebrity with London’s high society. The Prince and Princess of Wales visited him on multiple occasions and he corresponded regularly by letter with the Princess.

Joseph Merrick devoted his days to reading and entertaining guests. He often strolled in the courtyard but always after dark to avoid frightening patients. Joseph lived in his apartment for four years as his deformities became progressively worse. Happy and content, he died in his sleep in April 1890 at the age 27.

“Tis true my form is something odd, but blaming me is blaming God; Could I create myself anew, I would not fail in pleasing you.”       A poem Joseph Merrick kept with him