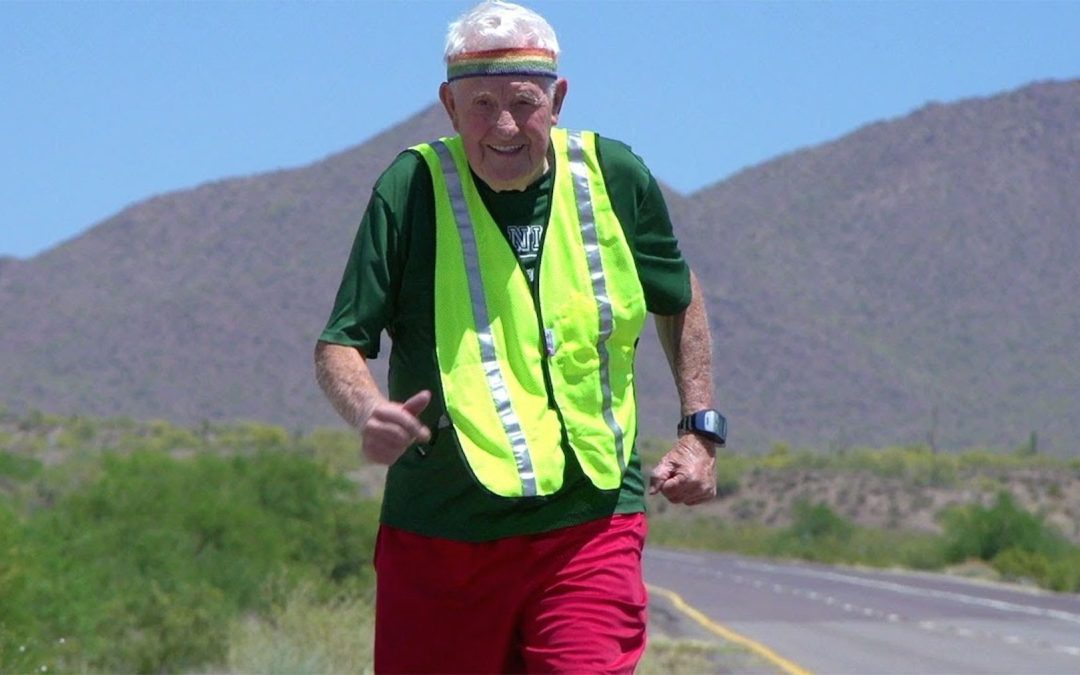 Saturday, August 20, 2016 – St. Simons Island, Georgia: One day after his 93rd birthday, with bands playing and hundreds of people following behind him, Ernie Andrus reached the Coast Guard Station on the island and dipped his toe in the Atlantic Ocean. Two years, 10 months, and 2,640 miles after he began, the old geezer completed his mission.

In 2000, Ernie Andrus’ World War II veterans group decided to tackle the restoration of a WWII LST ship. For 18 months, Andrus had served as a medic aboard such a vessel in the South Pacific. U.S. President Dwight Eisenhower credited the LST (Landing Ship Tank) with helping win the war.

These specially designed ships could carry troops, artillery, tanks and supplies right on to the beaches of Europe and the South Pacific for quick strikes. The veteran’s group discovered that the last one of the 1,051 LST’s built during the war, the LST 325, was in disrepair in Greece.

In 2012, 89-year-old Andrus, looking for a way to raise money, discovered the oldest man to run across America was 73-year-old Paul Reese in 1990. A great fundraising idea, Andrus might beat the record by 20 years. Andrus made plans to sell his house, buy a small motorhome and begin his cross-country run. Family and friends assumed “the old geezer had dementia.” He couldn’t be serious.

On October 7, 2013, Ernie Andrus, age 90, dipped his toe in the Pacific Ocean in San Diego and set out. He planned to run three days a week, a total of 12 to 25 miles, and reach St. Simons Island, Georgia, by his 93rd birthday. His method was to find a location to park his motor home for a few weeks, run six miles and hitchhike back to the motor home – then he would drive the Dodge Dart he towed to the next starting point and repeat the process.

Averaging 18 miles per week, Andrus reached the Texas border in the late summer of 2014. Increased news coverage of “A modern-day Forrest Gump” brought out other runners and supporters. Some accompanied Andrus for weeks at a time – driving him out and back, providing food and encouragement.

People who heard about Andrus’ run across America stood along streets to cheer when he ran by or to give him money. In Seminole, Texas, 300 children stood outside their school holding American flags and chanting “USA, USA,” when he passed. On the days that he wasn’t running, he spent his time responding to his 5000 Facebook friends and answering hundreds of emails.

The crowds grew as Andrus crossed Georgia on U.S. Highway 84 in August 2016. Runners and friends he met along the way began to arrive, anticipating the conclusion of the historic run. On that Saturday morning in August 2016, Ernie Andrus became the oldest man to run across America by two decades. He received about $48,000 in direct personal donations during his run, and countless other donations were made to the LST Memorial website.

Ernie Andrus enjoyed his cross-country run so much that at age 95 he left St. Simon Island headed back to San Francisco in March 2019. Should you see an older gentleman run by, wave your flag and give him a donation. Restoration of the LST 325 continues.