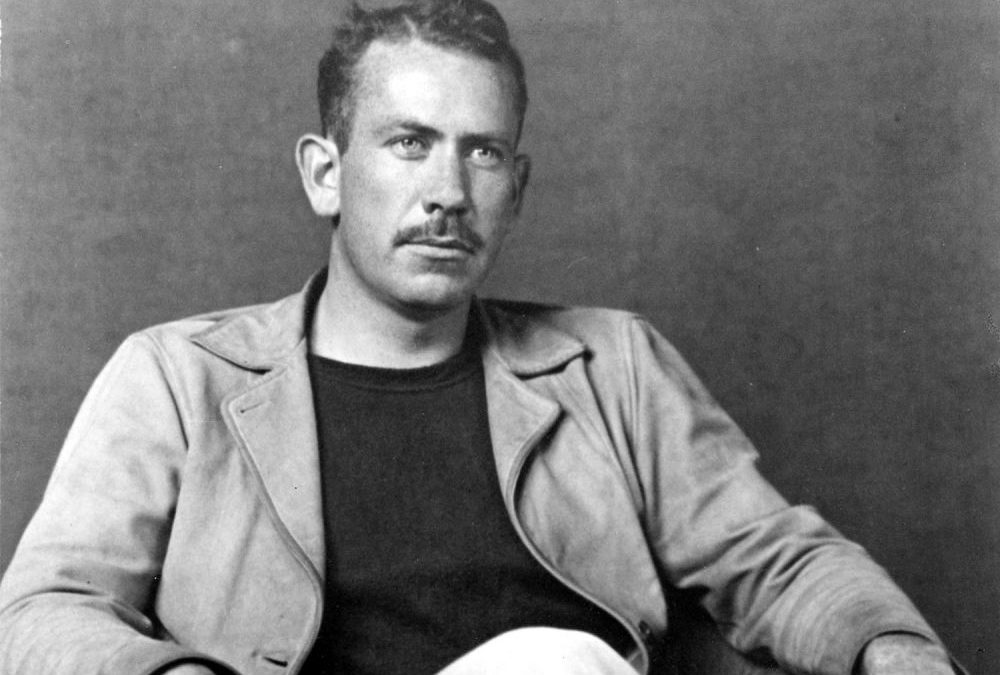 May 27, 1936 – Salinas, California: John Steinbeck reluctantly pinned the letter to his editor Elizabeth Otis. “My Irish Setter pup, Toby, left alone one night made confetti of my manuscript. I was pretty mad, but the poor little fellow may have been acting critically. I did not want to ruin a good dog for a manuscript that I’m not sure is good at all. I hope you are not angry.”

The 34-year-old Steinbeck, uncertain as to whether the book was even worth rewriting decided to give it another try. He needed the money; the power company was threatening to turn off his electricity.

John Steinbeck was born in Salinas, California in 1902. After studying English Literature for two years at Stanford University, he dropped out of college. He moved to New York and for two years supported himself doing odd jobs while he tried to write novels. In 1925, after failing to have any of his work published, Steinbeck moved back to California. He got a day job as a tour guide and caretaker at Lake Tahoe and spent his evenings writing.

After watching their son struggle to make ends meet, his parents allowed Steinbeck to use a house they owned, gave him a loan so he didn’t have to work, and bought the paper for his hand-written manuscripts. Still, he struggled. He published three books of fiction in the early 1930’s, but they failed to generate enough money to cover the miniscule advances from the publisher.

In 1935, Steinbeck published Tortilla Flat, his first success.He was amazed by the book’s popularity. He told a friend, “I am curious how this second-rate book, written for relaxation, should cause such a fuss. People are taking it seriously.” Sales from the book were enough money to pay off his bills and to buy his puppy, Toby.

After Toby destroyed his manuscript, Steinbeck moped around for a few days. Then he decided to start over. He had told Elizabeth it would take months of work to complete it, but by diligently writing 2,000 words each day, he finished the book in two months. He mailed it, and crossed his fingers.

Of Mice and Men, published on February 25, 1937, was Steinbeck’s break-through literary work. The critically acclaimed novel immediately made the bestseller list, sold 117,000 copies within a few months, and made a national book-of-the-month club. Steinbeck was asked to write a stage version of the book and the Broadway play based on the book, which garnered great reviews and received a New York Drama Critics Circle Award.

In 1939, Steinbeck published The Grapes of Wrath, considered his finest work. It went directly to the New York Times bestseller list and sold 430,000 in the first few months. Later that year, the book won the Pulitzer Prize for Fiction and was adapted into a movie starring Henry Fonda. The book has sold more than 14 million copies. John Steinbeck wrote 27 books during a 30-year career. In 1962, he was awarded the Nobel Prize for Literature for “his imaginative and realistic writing.”

Of Mice and Men was initially titled Something that Happened. The book theme centers on the fact that sometimes things happen outside our control and we have to deal with it. Things don’t always go according to our plans, i.e., the best-laid plans of mice and men often go awry. Sometimes the dog eats our book. Of his shredded manuscript, Steinbeck joked, “I guess Toby was right.” The manuscript needed rewriting.