by peteblack4ua@gmail.com | May 18, 2020 | Courage Under Fire, Determination Despite the Odds, Rising Above Circumstances 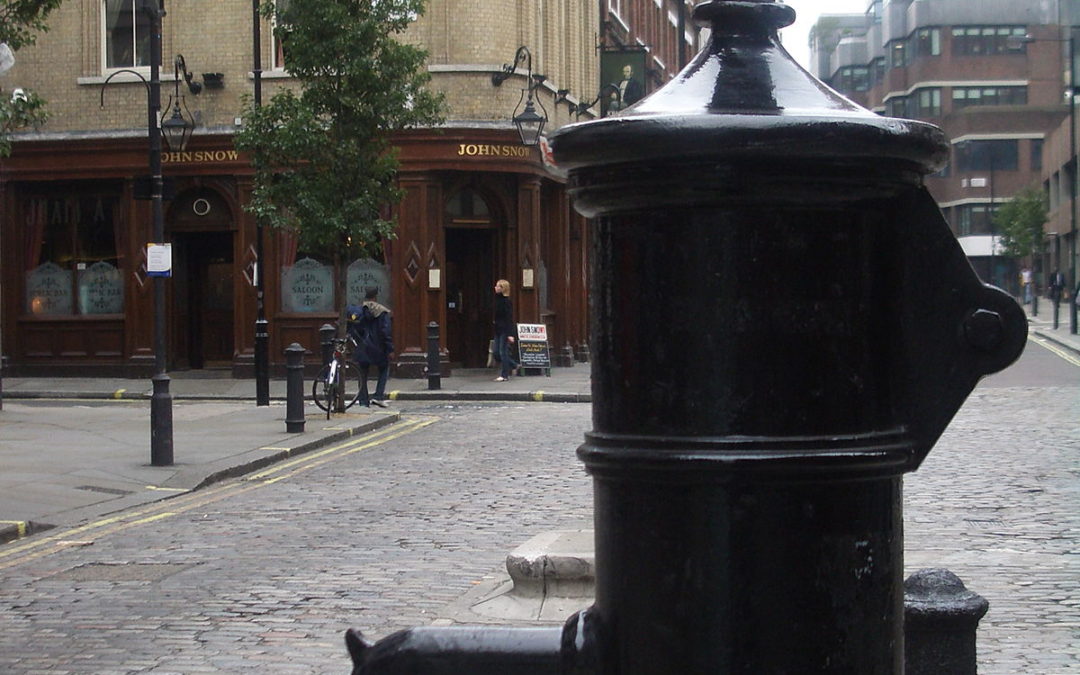 September 7, 1854 – London, England: The most dreaded disease of the age, cholera, was back with a vengeance. There were more caskets than the horse-drawn hearse wagons could carry away. In Soho, one of London’s poorest neighborhoods, more than 500 people died in five days. More would have died except that hundreds fled the area. All those who died lived within a quarter-mile of the well water pump at 40 Broad Street.

While others were running from the outbreak, John Snow ran to it. He devoted all his spare time to knocking on hundreds of doors in London’s sickest, most dangerous neighborhoods hoping to find data that would point him to the cause. Snow first became obsessed with finding the cause and cure for cholera in 1832 while working as a medical apprentice.

Snow, one of the best physicians of his day, was one of several doctors assigned to Victoria, Queen of England. Despite his success as a physician to the royal family, Snow’s real passion was cholera. An unlikely candidate for the job, he referred to his research as the “Grand Experiment.”

During the epidemic of 1854, Snow, in his spare time, and despite the great risk to him, went house-to-house knocking on doors. He asked if those who got sick drank water from the pump. In early September of that year, Snow created a map of the Broad Street neighborhood. He placed a thick black dot next to each house with a cholera case.

Cholera is a gastrointestinal infection caused by bacteria. Symptoms include nausea, vomiting and severe diarrhea. For years the leading public health officials and government authorities in London believed that noxious smells, not contaminated water, were responsible for cholera. The Cholera Commission’s report on the 1854 outbreak stated, “Cholera thrives in unventilated, crowded spaces where unsanitary conditions and noxious smells abound.”

In early 1855, John Snow presented his map and his theory that cholera was a waterborne illness to the Medical Society of London. His investigation had led him to the discovery that the outbreak began when a mother had washed a diaper of a child infected with cholera in a cesspit that drained into the Broad Street well. Snow’s theory was deemed preposterous. The scientific and public health community criticized him in the London newspapers for his crazy hypothesis.

Unfortunately, Dr. John Snow never saw his theory proven correct. On June 10, 1858, the 45-year-old doctor had a stroke and died six days later. It would take another outbreak a decade later to finally convince authorities that dirty, contaminated water caused cholera. Snow’s theory was not accepted until 1866, when Dr. William Farr, one of his staunchest adversaries realized the validity of Snow’s work.

Authorities finally agreed that sewer lines emptying directly into the Thames River were the cause of the cholera outbreaks. What followed was one of the largest engineering projects in the 19th Century, the construction of a new sewer system to take sewage away from central London and the river.

“Most of the important things in this world have been accomplished by people who kept trying when there seemed to be no hope.”           Dale Carnegie