The Angel of the Battlefield – Monroe Journal, September 14, 2017 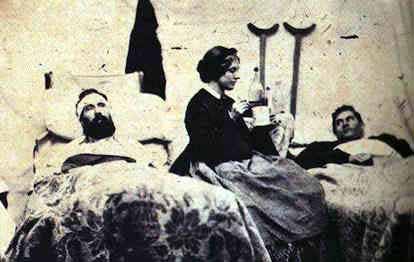 Born Christmas Day 1821, in Oxford, Massachusetts, and referred to by her parents as their “Christmas Angel” she would later be known as the “Angel of the Battlefield.” The youngest of five children, it was apparent from an early age that Clarissa Harlowe Barton, who insisted she be called Clara, was “uncommonly willful.” It was in her DNA to challenge the norm, the routine, and it irritated her when things always had to be done a certain way.

At age 16, Barton became a schoolteacher in Oxford. Later in 1854, she became one of the nation’s first women to start a public school. Within two years the school, located in Bordentown, New Jersey, jumped from a few students to 600. When town officials took exception to a woman being the principal and hired a man, 34-year-old Barton quit the job and moved to Washington, D.C., where she found employment in the U.S. Patent Office. Her excellent work got the attention of Patent Office Commissioner, Charles Mason, who promoted her to be his clerk making Barton the first woman ever to hold a white-collar position in the U.S. Government.

With the advent of the Civil War in April 1861, Barton learned that several of the wounded Union soldiers receiving treatment near her office were her former “school boys.” After work and on her lunch breaks, she slipped away to bring them blankets, towels, bandages, and food. In the unlikeliest of places – the horrors of the Civil War – Barton found her calling.

Barton left the Patent Office and placed a newspaper ad soliciting medical supplies. As the support poured in she filled her house and then an abandoned building. In July 1861, when the reports of 3,000 Union casualties at the First Battle of Bull Run reached Washington, nothing would satisfy Barton but to be at the front lines helping take care of the wounded. When she took her request to the War Department she received an emphatic “No – war is no place for women.” For more than a year she badgered and begged every Union officer who would talk to her until she finally found Quartermaster Daniel Rucker. In desperate need of help, he violated Army protocol and wrote her a pass “to take a mule drawn wagon with supplies to the front.”

At midnight on August 9, 1862, Barton arrived with a wagonload of supplies at the field hospital following the battle of Cedar Mountain in northern Virginia. The astounded surgeon on duty told his commanding officer, “I thought that night…if heaven ever sent out an angel, she must be the one – her assistance was so timely.”

Stories about the “Angel of the Battlefield” spread quickly through Virginia. Union officers requested Barton’s help following the Second Battle of Bull Run. Later, she arranged delivery of rail cars of supplies to the battles at Antietam and Fredericksburg. In 1864 Union General Benjamin Butler appointed Barton as “the lady in charge” of all the field hospitals at the front of the Army of the James. She served in this position tirelessly until the end of the war.

Today with 35,000 employees and more than 500,000 volunteers, the American Red Cross collects 40% of the nation’s blood supply, provides disaster relief, and performs more than 1,000 emergency services for military personnel daily. In 2016, the Red Cross raised $2.6 billion to support these services.