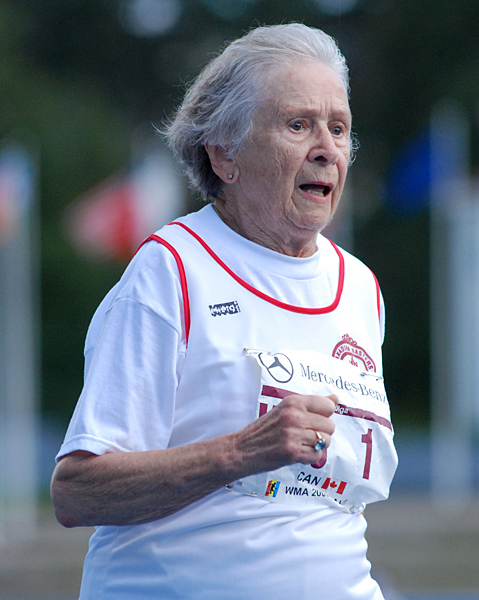 March 1, 2010 – Kamloops, British Columbia: When Olga Kotelko showed up at the 2010 World Masters Indoor Athletic Championship, the track officials had a dilemma.  The 91-year-old was the only entrant for the 60-meter sprint in the women’s 90-95 age group. With whom would she compete?

The next oldest female in the meet was 84-year-old Johnnye Vallien from California. So rather than having Olga compete in the women’s 80-85-year-old category, event organizers placed her in the men’s 90-95 division. Olga did not mind racing with the men, she was used to it. At her age, there wasn’t as much competition as there once was. She finished third, just four seconds behind 92-year-old Ugo Sansonetti of Italy who broke the world record in 11.6 seconds.

Olga was born in Saskatchewan, Canada in 1919, the seventh of 11 children to a Ukrainian immigrant farmer. She and her siblings walked two miles every day to a one-room schoolhouse. Feeding chickens and pigs, and milking cows filled the afternoons and weekends. After a failed marriage, Olga and her two young daughters moved in with her sister in Vancouver, British Columbia. There she worked on the docks during the day and earned a teaching degree at night. She taught school until retiring at age 65.

At age 70 Olga joined a 55-and-older-coed softball league. Two years later, after a collision in the outfield, a friend suggested that she try track and field. On a track in Vancouver in 1996, 5 feet tall Olga discovered her sport. It wasn’t long before the grandmother was turning heads and setting records, not only in British Columbia but also around the world. She competed in the long jump, triple jump, high jump, shot put, discus, javelin, and the 100, 200 and 400-meter sprints. Friends talked her out of trying the pole vault due to her age and the practicality of strapping a pole to the top of her car.

In 1999 Olga set two world records and won six gold medals in the women’s 80 years-and-over age category at the World Masters Track and Field Championships in Gateshead, England. At age 85, she broke 20 track and field age-group world records in a single year.

In 2009 in Sydney, Australia, the 90-year-old athlete reached a long-term goal when she finally broke the world record in the women’s 100 meters in 23 seconds, a time faster than the winner in the 80-85 age group. In 2010, Olga, with 23 master’s world records in her pocket was honored to carry the Olympic torch at the XXI Winter Olympics in Vancouver where she lived with her daughter and son-in-law.

Olga’s success intrigued gerontologists and physiologists. She agreed to become a human guinea pig at the Montreal Neurological Institute by donating blood and muscle tissue samples and submitting to brain CT Scans and MRI’s. To their surprise, 90-year-old Olga’s cell mitochondria matched those of someone age 65. Olga’s genetics were not particularly noteworthy – her father died at age 74, her mother at 85. She ate mostly protein, fruits, and vegetables and took a baby aspirin each day.

The masters’ track and field legend died in June 2014, two months after her 95thbirthday, the only woman in the world still competing in the long jump and high jump events in the women’s over 90 categories. The ageless dynamo held 37 age group world records in 100 meters, javelin, long jump, and discus and won more than 750 gold medals in national and international competition.

“I started playing slow-pitch softball at age 70, and a new life opened up for me. Rise up off your butts, people, you’ll feel better and live longer. It’s not how old we are, but how we get old that counts.”             Olga Kotelko