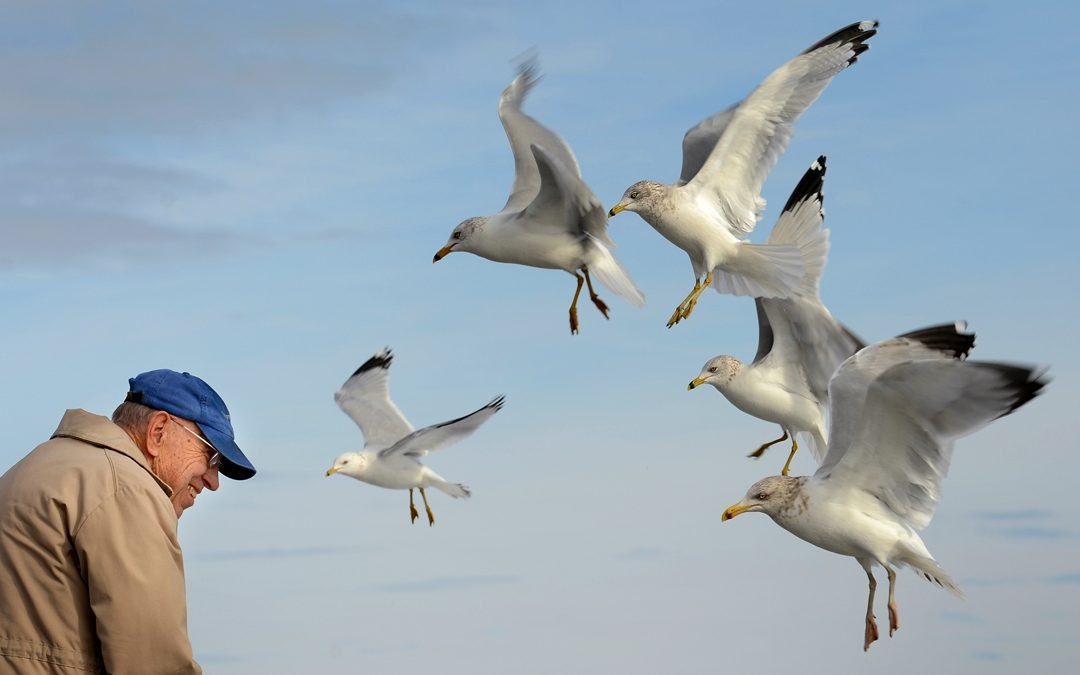 1970 – Key Biscayne Beach, Florida: On most Friday afternoons just before dark, old Ed showed up at the pier with a big bucket of shrimp. Soon he was joined by hundreds of circling seagulls. The birds had learned to anticipate his visits. As Ed tossed the shrimp, he uttered a heartfelt, “thank you, thank you.” When the shrimp were gone, Ed would gaze at the ocean as if in another place and time. The old codger seemed lonely, strange and eccentric to bystanders, but only because they didn’t know his story.

Born in 1890, Eddie Rickenbacker, the son of German-speaking Swiss immigrants, grew up in Columbus, Ohio. His lifelong love of speed and machines began at an early age when he built and raced wooden go-carts in his neighborhood. In his late teens, Eddie was racing cars on the local tracks around Columbus. By his mid-20’s, Eddie was well known on the national racing circuit, having earned the moniker “Fast Eddie.” In 1915, his skills landed him in the Indianapolis 500 race.

During World War I, Eddie joined the U.S. Army Air Service and became a fighter pilot in Europe. He was fearless in the cockpit. He became the most decorated pilot during the war, having shot down 26 enemy planes. Eddie was awarded the Distinguished Service Cross a record eight times and was also awarded the rare Medal of Honor.

During World War II, Eddie committed Eastern equipment and personnel for military activities. He pledged his planes to fly troops and supplies to Europe. In 1942, Secretary of War Henry Stinson summoned Eddie to the White House. At President Roosevelt’s request, he was given a secret coded message to personally deliver to General Douglas MacArthur, Supreme Commander of the Pacific Theater Operation.

In October 1942, Eddie boarded a B-17 Bomber in Hawaii headed to see MacArthur. Due to a navigational error, the bomber missed the refueling stop at Canton Island, 1800 miles southwest of Hawaii. Former American Airlines pilot William Cherry was forced to ditch the plane in a remote part of the Central Pacific.

Authorities did not know where the plane went down, and they presumed the crew was dead. However, Eddie and the crew of seven survived the crash with only minor injuries. Before the plane sunk, the men located three small life rafts, an emergency kit and 60 feet of rope. They had no water, no food and no protection from the relentless sun.

The crew divided themselves among the rafts and tied them together 20 feet apart. On their first night at sea, they shot all 18 flares. No plane or ship responded. Morale plummeted. After a week, the situation was dire. Eddie suggested they pray for a miracle.

They prayed and sang hymns. A few minutes later, a seagull landed on Eddie’s hat. He grabbed the bird by the legs and rung its neck. They shared a meager meal and Eddie used the intestines and a fishing line from the emergency kit to catch a mackerel. That night a miracle monsoon quenched their parched throats.

During the next few weeks, the crew managed to catch enough fish to survive. On day 24, a plane spotted the rafts and the men were rescued. After recovering for a week in a naval hospital, Eddie carried the President’s message to MacArthur.

Eddie Rickenbacker served as chief executive officer of Eastern Airlines until his retirement in 1963 at age 73 when he moved to Key Biscayne. He never forgot his South Pacific survival experience. Eddie loved to feed the seagulls on Friday. It was a time of reflection and gratitude.

“The biggest lesson I ever learned was while drifting on a raft in the South Pacific for 24 days with my buddies. If you have all the fresh water you want to drink and all the food you want to eat, you ought never to complain about anything.”                Eddie Rickenbacker