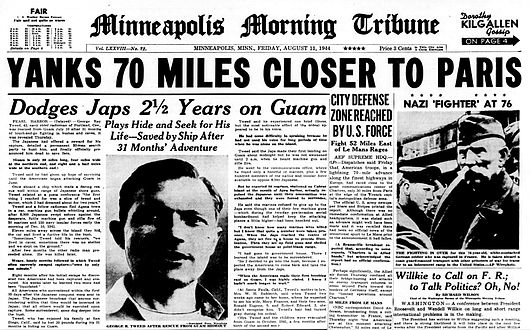 Guam, South Pacific – December 8, 1941: Navy Chief Radioman George Tweed woke to the booming sound of field artillery guns. Suddenly he was wide-awake – the Marine Corps did not have heavy artillery on Guam. The Japanese were invading the island.

Tweed knew the 150 Marines and 400 Navy personnel assigned to the island were defenseless. He had two choices. He could surrender and become a Japanese prisoner of war, or he could hide in the jungle with the hope of not being found. Tweed and five Navy buddies bolted from the barrack and ran into the bush while the Japanese quickly captured the remaining Americans.

Located 3,300 miles west of Hawaii, the small tropical island of Guam is 30 miles long and four to eight miles wide, and the westernmost territory of the United States. In 1941, the island was home to 24,000 Chamorro people of Indonesia-Malaysia descent. After three generations of American influence, most of the natives spoke English and were loyal to America.

Tweed hid in the jungle expecting it to take as little as a week for the Navy to recapture Guam. Within a couple of days, the Japanese knew Tweed was hiding on the island because he was listed as the chief radioman but was not in the prison lockup. Fifty Japanese soldiers and 400 native Chamorros, forced into service, began a systematic search of the island. The Japanese issued an order that the six Americans surrender within 30 days, or they would be beheaded when captured.

Because of their hatred for the Japanese, the Chamorro protected Tweed and his buddies, bringing them food and hiding them in caves and remote huts. During the summer of 1942, three Americans were captured and beheaded. Two more Americans were caught in October 1942 and shot, leaving Tweed on the run by himself.

In the first 10 months in the jungle, Tweed stayed in 11 different jungle hideouts. The Japanese threatened to torture and kill any man, woman or child caught assisting Tweed, and they posted a 1,000-yen reward for his capture.

Despite the threats, the Chamorro remained loyal to George Tweed. One man sold his bicycle to buy food for him. Others, forced to search during the day with the Japanese, secretly brought him food at night. The natives were interrogated unmercifully, beaten, raped and killed but no one revealed Tweed’s hiding places.

In December 1942, filthy, starved, and well aware of the treatment of his protectors, Tweed decided to surrender. However, Chamorro leaders pleaded with him, “The Chamorro people feel that as long as you hide out, the Americans will come back and save them from the Japanese.” Not wanting to betray the confidence of the Chamorro, Tweed determined to survive somehow until the Americans returned.

On June 11, 1944, the drone of planes overhead awakened Tweed in his cave. Although the clouds hid their view, the B-17 bomber engine sound was unmistakable. He ran to the top of a hill overlooking the Pacific to discover two Navy destroyers two miles off the beach – the Americans were finally returning.

Tweed spent two long days on the hill using the reflection from a three-inch mirror before he finally got the attention of a naval destroyer. Then using a flag made by taping gauze to a stick, he signaled the ship that he was an American. In tattered clothes, with long hair and beard, the emaciated American was rescued on the beach.

George Tweed hid in the jungles of Guam for 31 months avoiding the relentless searching of the small island by Japanese troops. For his heroic actions, the Navy awarded Tweed the Legion of Merit Medal, the Silver Star Medal, and a Presidential Citation. It took four bloody weeks for U.S. troops to liberate Guam, but on July 21, 1944, the Japanese were driven from the island.