by peteblack4ua@gmail.com | Feb 12, 2019 | Chasing Your Dream, Hanging on to Hope, Overcoming Adversity | 3 comments 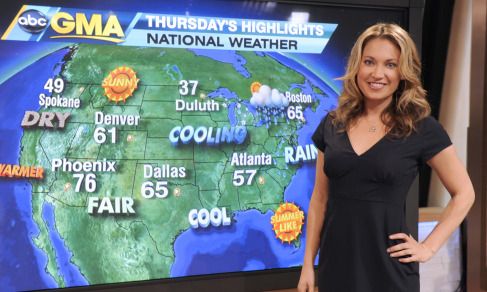 November 2011 – New York City: Two weeks before she began her dream job as a meteorologist on ABC’s Good Morning America, Ginger Zee checked herself into an in-patient mental health facility. She had seen six different therapists over the years, but her battle with chronic depression continued. On the surface, she was a young, beautiful, successful weather forecaster. But under that façade was a dark, ominous cloud of self-deprecating thoughts and emotions like the storms she covered.

Growing up in Grand Rapids, Michigan, Zee had been fascinated with weather. As a child, she and her father loved to watch as the storms rolled in off Lake Michigan. While other little girls played outside, she was glued to the TV weather report. When she was nine, her parents divorced and her world changed. She moved to a new house with a new stepfather. Zee rebelled by not eating. By age 12 she was being treated for anorexia and depression.

In high school, a teacher encouraged Zee to become a TV meteorologist. She chose Valparaiso State University in Valparaiso, Indiana, because the school offered a storm-chasing course. After her freshman year, she sent out 35 resumes hoping to land a meteorology internship. The lone response came from James Spann, the weather guru at ABC 33 TV in Birmingham, and the internship with him validated her dream of becoming a TV meteorologist.

In college, Zee excelled in her classes, had many friends, and never met a stranger. But inside she continued to battle a storm of depression. At 22, she attempted suicide by taking a handful of prescription pills. Fortunately, a roommate found her and took her to the hospital. At her mother’s insistence, Zee started seeing a clinical psychologist.

In 2002 she earned a bachelors degree from VSU in meteorology with a minor in math and Spanish. Six months after graduation Zee became a weekend weather forecaster at the TV station, WEYI, in her hometown of Flint, Michigan. Her knowledge and energy made her popular with viewers. In 2004, 25-year-old Zee moved to WOOD TV in Grand Rapids, the number one news and weather show in western Michigan.

Zee’s big career opportunity came in September 2005 when she was sent to Gulf Port, Mississippi, to cover the aftermath of Hurricane Katrina. In the fall of 2006, at age 25, Zee became the meteorologist at WMAQ Channel 5 in Chicago, the third largest television market in the country. On TV her life and career seemed perfect, but off the air, it was a disaster.  She was in an abusive relationship with a boyfriend; twice she canceled the wedding – both times the invitations had been sent and the cake ordered.

After covering the early morning weather show, Zee would return to her apartment, draw the curtains and sit in her dark apartment with a bottle of wine. After the 6 p.m. and 10 p.m. weather, she needed more wine to help her sleep. Though she was seeing a therapist for sleep problems, the medication exacerbated her depression. She felt worthless and hopeless, and suicidal thoughts haunted her.

In November 2011, after five years at WMAQ, Zee got the call from Good Morning America. She could not afford to blow this opportunity so she checked herself into a psychiatric inpatient facility. For the first time in her life, she was honest with herself and her psychologist, Dr. Scott Wilson. After weeks of therapy sessions, the dark depressive clouds began to lift.

Today Ginger Zee is the Chief Meteorologist for Good Morning America and the first female weather editor for ABC News. She still meets weekly with Dr. Wilson. Zee is now happily married and the mother of two beautiful sons.

“The storms in our lives have a purpose. My journey through depression made me stronger. No matter your storm, it never rains forever.”          Ginger Zee