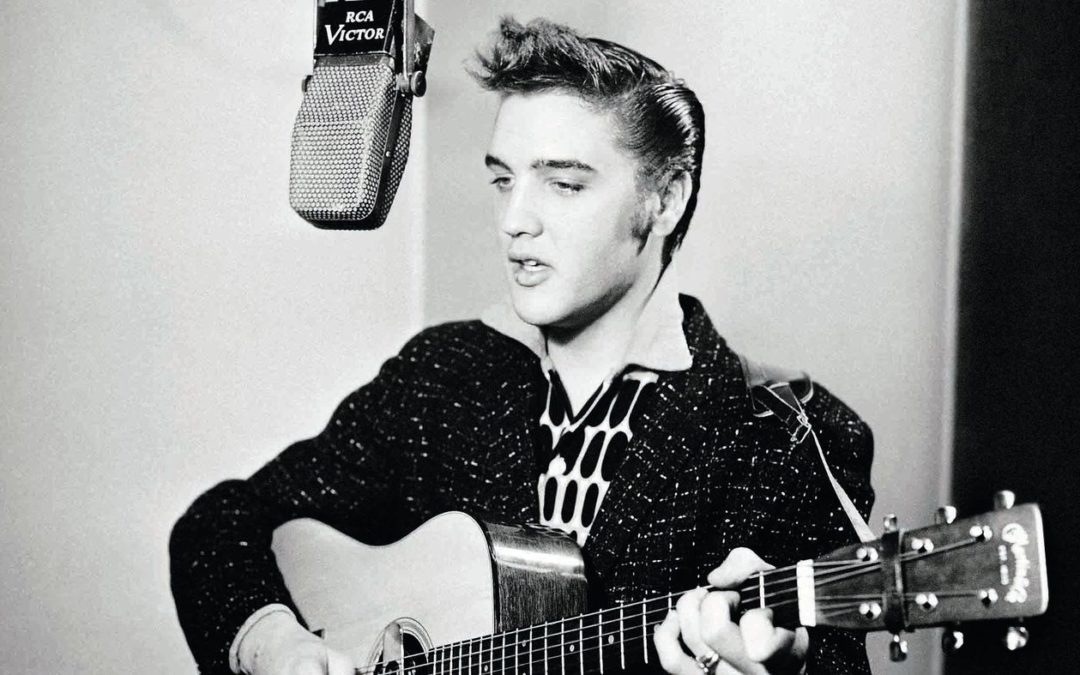 May 1954, Hi Hat Club, Memphis, Tennessee: Nineteen-year-old Elvis sat nervously sipping a coke at a corner table with his girlfriend. He was excited to have a chance to audition as a singer with the band playing on stage. For a moment, Elvis was back in eighth grade, failing music. The only class he ever failed. His teacher told him he did not have an aptitude for singing or music. She was not a fan of his hillbilly music.

Elvis performed two songs with the band using the beat-up guitar he got for his tenth birthday. After Elvis sang, Eddie Bond, the bandleader, called him aside. Bond began, “What do you do for a living?” Elvis responded, “I drive a truck for the Crown Electric Company.” Bond advised, “Well, stick to driving a truck because you are never going to make it as a singer.” This was the third time a band had poured cold water on Elvis’ dream in the past year.

Elvis Aaron Presley was born in a two-room shotgun house in Tupelo, Mississippi, in January 1935. At 13, he and his family moved to Memphis. Three days after graduating from high school, he went to work at the Parker Machine Shop. After a few months, rather than get a haircut, Elvis quit and took a job driving a truck for the Crown Electric Company.

Despite the rejections, Elvis hung around Sun Records Studio until Sam Phillips finally agreed to let him audition. Phillips had once told a friend, “If I could find a white man with an African American sound I could make a billion dollars.” He found him on the night of July 5, 1954, when Elvis took his child guitar, started dancing around shaking his legs, and launched into the 1946 blues number, “That’s All Right, Mama.” Some say Rock ‘N’ Roll music was born that night at the SUN Studio.

Elvis’ music was an odd blend of the Assembly of God church gospel he grew up singing and the Black Rhythm and Blues music he heard as a teenager in the bars on historic Beale Street. Phillips wasn’t sure what to call this kind of music – there was no music to compare it to – but he loved it.

Phillips sent Elvis’ recording to Memphis radio stations and in a matter of weeks Elvis was a local star. By the end of the year, his songs played on radio stations from West Virginia to Texas. In January 1956, RCA bought his contract and later that month Elvis made a national television appearance on Stage Show, a weekly variety show in New York City.

Elvis’ television performance, with his unique way of shaking his legs and gyrating his hips, created a storm of controversy across America. The New York Daily News complained, “Music has reached its lowest depths in the grunt and groan antics of one Elvis Presley. He gave an exhibition so suggestive and vulgar it should be confined to dives and bordellos.”

Some older generation folks feared it would corrupt teens. Young girls screamed and fainted with excitement when he performed. Elvis’ popularity skyrocketed.  By the end of 1956, he was a music phenomenon – a national sensation.

No one had more influence on music in the second half of the 20th century than Elvis Presley. One of a handful recognized by their given name, the King of Rock and Roll has sold more than one billion records, more than any other recording artist in history. With no formal music training, Elvis played by ear. The shy kid from Memphis with the unusual music style, who no one thought could sing, is in the Rock ‘N’ Roll, Country, and Gospel Music Halls of Fames.