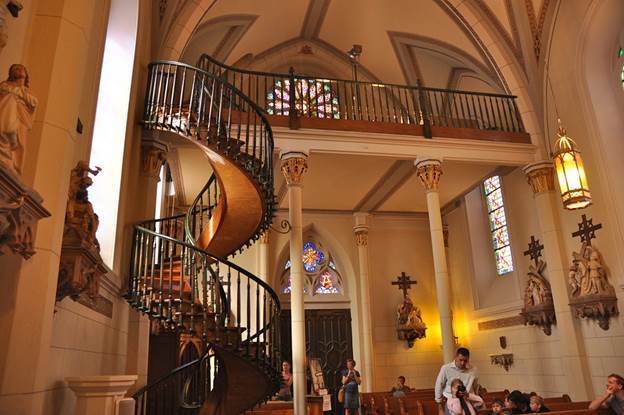 1878 – Loretto Chapel – Sante Fe, New Mexico: The nuns stared sadly at the choir loft, positioned 22 feet above the chapel floor. They were distraught. Desperate. After five long years, their chapel was complete except for one thing – there were no stairs to the loft. They had asked several carpenters to build the stairs but none would tackle the job claiming the architect had failed to leave enough room for stairs. Having run out of options, the Holy Mother declared a novena – nine days of prayer to St. Joseph, the Patron Saint of Carpenters.

In 1852 Archbishop Jean-Baptiste Lamy sent a request to Catholic teaching orders across the country inviting them to start a Catholic school for Hispanic students in Sante Fe. The Sisters of Loretto responded and sent six nuns from Kentucky who traveled by stagecoach along the Sante Fe Trail to the church. A year later, they started a small school, which eventually grew to 300 students.

Two decades after their arrival, the Sisters persuaded Archbishop Lamy to allow them to build a small chapel adjacent to the adobe church and school. They raised $30,000 that was pooled from some local donations and mostly from their life savings. Lamy brought in French architect Antoine Mouly to design the chapel in the Roman gothic style like a cathedral he had once seen in Paris.

The chapel construction began in 1873 and progressed slowly. Unfortunately, four years into the project when the chapel was finished except for the stairs, Mouly died. The Sisters advertised in the local paper for carpenters to build the stairs and they had several inquiries, but no takers. There wasn’t room in the small chapel for a staircase. The carpenters all suggested a ladder be built from the floor to the loft, but the sisters dreamed of an intricate staircase.

The peasant appeared at the chapel on the afternoon of the ninth day of the prayer vigil. He rode a donkey, had a small chest of carpenter tools, and was looking for work. He claimed he could build the staircase. The nuns were skeptical, but having nothing to lose, they gave him permission to start. The carpenter slept in the chapel and the nuns fed him. He didn’t say much. He asked for no money.

It took the carpenter six months to build the stairs. When his project was complete, he disappeared before the nuns could thank or pay him for his service. They searched Sante Fe for the mysterious craftsman. They even put an ad in the paper trying to find out who the carpenter was, but he was never seen again.

Today, the Loretto Chapel sits at 207 Old Sante Fe Trail. It is located at the extreme west end of the old trail, which once stretched from Independence, Missouri, to Santa Fe, New Mexico. The Loretto Academy closed in 1968 and the property is now a private museum and wedding chapel, which is visited by 250,000 people each year.

The staircase continues to amaze visitors and puzzle architects, engineers and master craftsmen. The spiral design has 33 steps, features two 360-degree turns, and has no center support. The entire weight of the stairs rests on the bottom step. The intricate structure was built with simple tools – a saw, hammer, chisel, and a carpenter’s square. No nails, glue or screws were used in the construction – only square wooden pegs. Experts believe the wood in the staircase to be a type of hard fir; it is not native to the southwestern United States.

St. Joseph’s staircase, built by a supernatural stranger, stands almost 150 years later as a testimony to the fruit of fervent prayers lifted to Heaven when all other options had been exhausted.