by peteblack4ua@gmail.com | Mar 29, 2021 | Against the Odds, Determination Despite the Odds, Long Shots | 2 comments 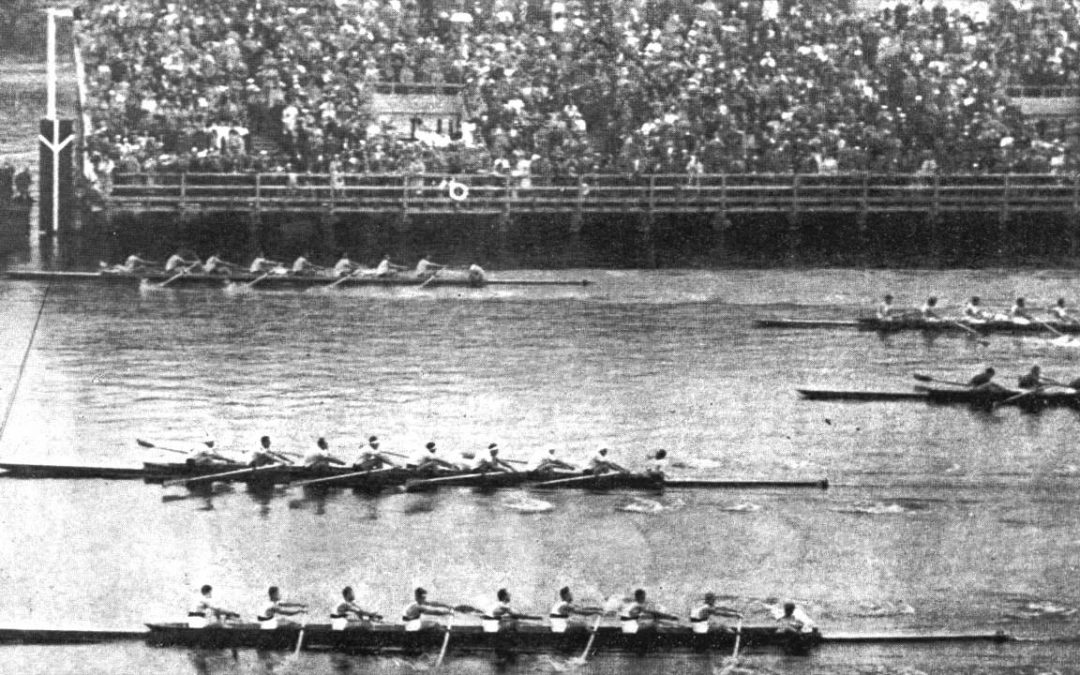 September 1935 – Seattle, Washington: University of Washington crew coach Al Ulbrickson told the Seattle Times that his Huskies would win the gold medal in the 8-man crew in the 1936 Olympics or he would quit his job. It was an extraordinary boast from a coach who had never won a NCAA championship and never even been to the Olympics.

In America in the 1930’s, collegiate rowing was almost as popular as basketball and football. On the West Coast, the University of California-Berkeley and the University of Washington dominated the sport while Harvard, Yale, and Princeton were East Coast powers. It was common for 100,000 people to watch a crew competition.

In April 1936, in the first competition of the season, Ulbrickson knew he had the right mix of power, endurance and teamwork in the boat when his team beat rival and highly favored Cal-Berkeley. He hoped this perfect combination would take him to Berlin. On June 22nd  in New York, Washington out rowed Cal and the best East Coast teams to capture the national championship. Two weeks later, the underdog Huskies beat out six competing boats, including several veteran teams, to win the Olympic trial.

On July 14 the U.S. Olympic team left New York on a steamship bound for Germany. Germany was the odds-makers favorite to win the Olympic rowing events. True to prediction, they dominated the six Olympics rowing events preceding the final event, the men’s 8-oared race, winning five gold and a silver medal.

On the morning of August 14, people in Western Washington woke up excited to listen to the 9 a.m. radio coverage of the 8-man crew event. For the first time NBC and CBS were carrying Olympics events live nationwide.

In Germany, Don Hume, the Huskies most important rower, whose stroke set the pace for the boat, was so sick with high fever and chills that he couldn’t get out of bed. Ulbrickson had no choice but to replace him in the boat. However, team members appealed the decision and convinced the coach that they would cover for Hume.

At race time, it was raining and windy on the lake and to further stack the odds against them, the U.S. team was assigned to lane six, the lane with most exposure to the head wind. The Germans, to no one’s surprise, drew the calmer lane one. Then the American team failed to hear or see the starter drop his flag and got a late start in the 2,000-meter race.

At 600 meters, the Americans were almost two boat lengths behind the lead boat, Italy. At the halfway point, they were dead last, a full five seconds behind the Italians, with Germany in second place. At 1,200 meters, Hume battling exhaustion, picked up the pace to 32 strokes per minute and with 500 meters to go, the American boat was dead even with the Germans and Italians.

Adolf Hitler was on his feet as 75,000 Germans, the largest crowd to ever see a rowing event in Europe, thundered “Deutsch-land, Deutsch-land, Deutsch-land.” At 1,800 meters, Hume and his teammates, rowing past the pain, and the little voices in their heads that said what they were trying to do was impossible, took the stroke to a dangerous, heart-bursting level of 44 strokes per minute. The three boats remained neck-and-neck-and-neck.

When the boats crossed the finish line, it was difficult to determine the winner from the stands. Hitler, thinking the Germans were victorious, stood with his clenched fist raised in the air. After a long pause, the announcement came over the loudspeaker: USA 6 minutes, 25.4 seconds, Italy 6:26.0, Germany 6:26.4 seconds. The roar of the crowd faded quickly. The University of Washington had done the impossible.

Jesse Owens stole the 1936 Olympic U.S. newspaper headlines by winning four gold medals in track and field. But in Seattle, the biggest sports news of the century occurred on a lake in Grenau, Germany, on Aug 14, 1936 – when a group of college boys shocked the Germans and stunned the world by winning the 8-man crew competition.

“When life takes the wind out of your sails, it is time to test the oars.”   Robert Brault