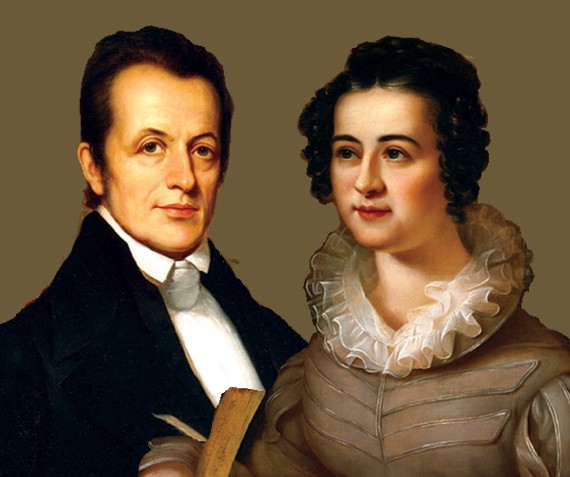 “I never prayed sincerely and earnestly about anything, but it came at some time; no matter how distant a day, somehow, in some shape, probably the least I would have devised, it came.”                    Adoniram Judson

October 1811 – Boston, Massachusetts: When Adoniram Judson applied to the American Board for Foreign Missions to become a missionary in India, he discovered that single men were not accepted into the program. The 23-year-old Brown University valedictorian and Andover Seminary graduate had never thought about marriage.

Judson decided that if marriage was a requirement, he was willing, but he had never even had a girlfriend. The mission board agreed to help him find a wife. They created a newspaper ad: Single missionary seeks adventurous female. Looking for a young, pious, educated, fit, and reasonably good-looking missionary-minded woman.

Ann Haseltine, a 21-year-old schoolteacher responded to the ad and her adventure was about to begin. The Judson’s were married, less than three months later, January 5, 1812. The day after the wedding, Ann’s new husband was ordained as a Baptist missionary and one week later they set sail for India. In mid-June, a week after arriving in Calcutta, they were ordered to leave India. The government had banned the proselytizing of Hindus.

After leaving Calcutta the Judson’s spent six months exiled in France before giving up on India and traveling to the tropical jungle of southern Burma a year later. They were the first American missionaries ever sent to a foreign land and the first missionaries to ever set foot in the country of two million Buddhists. They had been told that Buddhist Burma was impermeable to Christian evangelism. At the time, the sentence was death for someone to renounce Buddhism for Christianity.

The Judson’s mission was simple: pastor a church with 100 members and translate the Bible into Burmese. They immediately found a tutor and devoted 12 hours a day to learning the Burmese language, believed by many to be the second most challenging language after Chinese. It would be three years before they were fluent and four years before Judson held his first public meeting. Fifteen men attended.

On June 26, 1819, after more than six years in Burma, Adoniram Judson baptized his first believer, Moung Nau. Judson wrote in his journal, “Oh may it prove to be the beginning of baptisms in the Burma Empire which will continue to the end of the age.” By 1823, a decade after their arrival, his small bamboo and thatch chapel had 18 members.

A year later, during a war between Britain and Burma, Judson was imprisoned for 20 months in the infamous Ava Prison for preaching the gospel. He was frequently beaten and hung upside down by his feet with just his head and shoulders resting on the ground; but for the pleas, prayers, and regular visits of Ann, he would have died there. Two months after his release, Ann died of a tropical fever.

For hundreds of years Burmese folklore foretold of a man who would come one day with a book of truth. In 1823 while pastoring his church of 18 members, Judson completed a draft of the New Testament. A decade later he finished his Burmese Bible. It is still in use today.

Adoniram Judson died of a tropical disease in 1850, four decades years after his and Ann’s adventure began. He was buried at sea in the Bay of Bengal off the coast of Burma. Today there are 4,800 Baptist churches in Myanmar, modern-day Burma, and almost one million Baptists, the third largest population of Baptist outside the United States and India.

In a small cemetery in Malden, Massachusetts, there is a gravestone that reads, “Adoniram Judson: The ocean is his sepulcher, the Burmese Bible his monument, his record is on high.”