by peteblack4ua@gmail.com | Dec 23, 2021 | Courage Under Fire, Determination Despite the Odds, Never Give Up | 1 comment 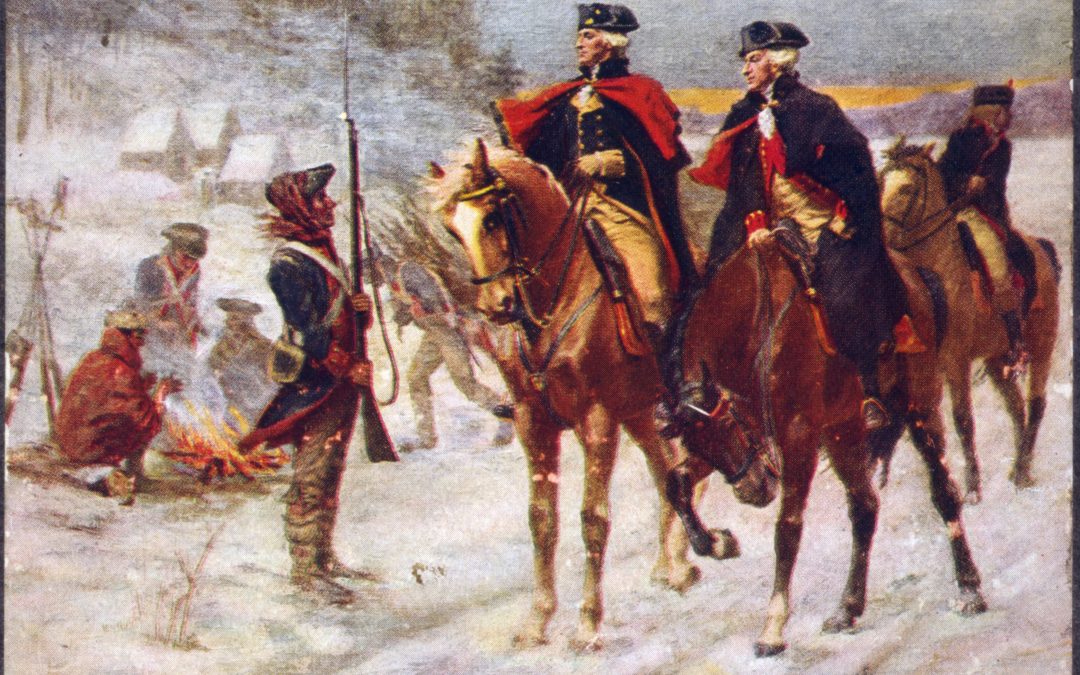 December 25, 1776 – Eastern Pennsylvania: On this Christmas day, there were no carols sung, no presents exchanged and no holiday meal shared with family. The small army of cold, exhausted and demoralized soldiers huddled by fires or shivered in their tents on the bank of the Delaware River. Some thought their situation was hopeless.

There were rumors of a secret mission being planned by George Washington, the Continental Army commander-in-chief. The soldiers quietly discussed if what they were hearing might be true – crossing the partially frozen river later that night seemed like a suicide mission to the ragtag band of patriots.

Washington knew that time was quickly running out. In six days, the one-year army enlistment commitment would expire for the majority of his troops. Some soldiers had already deserted and gone back home. Without a decisive victory, the short-lived Continental Army was probably doomed. If ever an army needed a victory for the morale of the troops, for the morale of a cause, it was Washington’s pitiful group of patriots.

In August 1776, just four months earlier, Washington’s army had numbered 20,000 men. Since then British forces under General William Howe had defeated Washington at the Battle of Long Island. Washington had subsequently been driven out of New York and across New Jersey to his current winter camp south of the Delaware. Having lost four consecutive battles, Washington was down to 3,500 ill-equipped soldiers, and short on food, ammunition and supplies.

Sickness, severe winter weather, desertion and expiring enlistments had taken their toll. Most soldiers wore tattered clothes and many were without shoes. There were few structures to protect them from the biting cold. General William Heath later wrote that Washington’s troops conditions were “so destitute of shoes that the blood left on the frozen ground, in many places, marked the route they had taken.”

By Christmas Day, Washington had finalized his plan of attack. That night he would ferry 2,400 troops across the half-frozen Delaware River at McKonkey’s Ferry. Then he planned to march nine miles to Trenton, New Jersey, for an early morning surprise attack on the 1,500 German Hessian mercenary soldiers occupying the town.

Success was dependent on the Continental Army being able to silently ferry across the river and arrive in Trenton without the enemy getting wind of their attack – no small feat for 2,400 men, horses and artillery.

The treacherous crossing began at 9 p.m. as the cold rain turned to sleet and later to snow. The weather conditions and the ice in the river delayed completing the crossing until almost 3 a.m. After a silent, snowy march to Trenton the surprise attack began at 8 a.m.

The Hessian troops were caught totally off guard. What kind of army crosses a partially frozen river at night in a snowstorm on Christmas Eve? Washington’s men attacked from three perimeters and the skirmish lasted only 45 minutes. More than 900 Hessians were captured, 92 were wounded and 22 were killed. Three continental soldiers lost their lives. Following the dramatic victory, Washington retreated across the Potomac River to his Pennsylvania encampment.

After the victory, Washington persuaded most of his soldiers to stay for six more weeks. Five days after surprising the Hessians, Washington once again took his army across the Delaware. After a 12-mile night march, he captured Princeton, New Jersey, from the British on January 2.

News of the two victories rapidly spread throughout the colonies. The news brought hope to the patriots and reinforcements to Washington’s army. And it shocked England and helped convince potential allies France and Spain to come to the aid of the fledgling nation.

Although the war lasted another six years, the Christmas victories at Trenton and Princeton were the great turning point of the war. Washington’s army had beaten the fearsome Hessians – outsmarted them. The difference was George Washington’s courage and refusal to give up, even when all seemed lost.