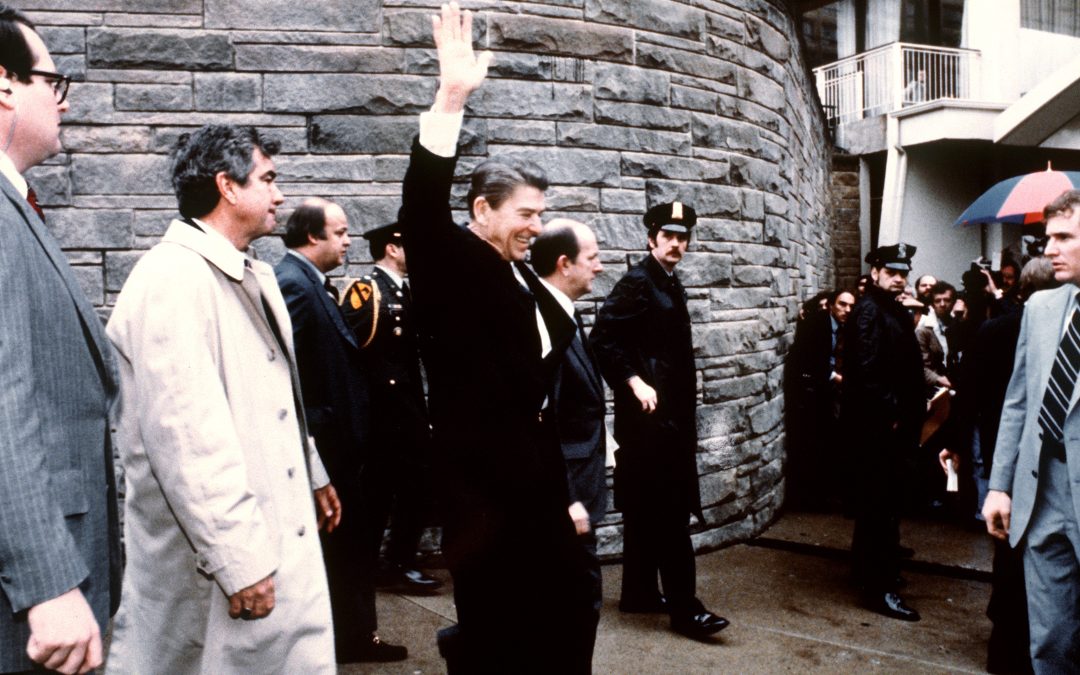 March 30, 1981, 2:27 p.m. – Washington Hilton Hotel: “Shots fired,” echoed across the Secret Service radios. Six shots rang out in less than two seconds. Jerry Parr, Secret Service Special Agent in charge of the president, shoved Ronald Reagan into the limousine and threw his body on top of him.

As the limo sped toward the White House, Parr noticed the president was spitting up blood so he directed the vehicle to nearby George Washington University Hospital. The president had been shot with a .22 caliber bullet, which had missed the heart by an inch and was lodged in his lung. He remained in the hospital for 12 days.

The shooter: A 26-year-old Texas loner named John Hinckley Jr. had become obsessed with the 1976 movie Taxi Driver, in which the main character plots to assassinate a presidential candidate. Hinckley watched the movie more than 15 times and moved to Hollywood to stalk 12-year-old Jodie Foster who played a leading role in the movie. Hinckley hoped his assassination attempt would earn him Foster’s affection.

In June 1982, a jury found Hinckley not guilty by reason of insanity. He was confined to St. Elizabeth’s Hospital, a psychiatric facility in Washington, D.C., where he was treated for a schizoid personality disorder and major depression.

Ironically, on that drizzly afternoon, John Hinckley was not the only person on the scene who had been obsessed and influenced by a movie. When Special Agent Jerry Parr was 9 years old, his father took him to see the 1939 movie The Code of the Secret Service. Parr was fascinated by the movie’s main character, Secret Service Agent Brass Bancroft, played by a 28-year-old Hollywood actor named Ronald Reagan. Parr made his father take him to the see the movie more than a dozen times.

Because of the movie, Jerry Parr decided to become a secret service agent. It was his dream to someday protect the president. In 1962, after earning an English degree from Vanderbilt University he landed a job with the Secret Service in New York City. Over the next 15 years, Parr worked his way up in the organization and in 1979 he moved to the Presidential Protective Division and became special agent in charge of White House security.

Parr provided security for President Jimmy Carter and then for Ronald Reagan when he was elected in November 1980. The 70-year-old Reagan had only been on the job for two months when the assassination attempt occurred. Jerry Parr’s prompt and decisive actions are credited with saving the president’s life.

In 1985, Parr retired from the Secret Service. Two years later, he received a master’s degree in pastoral counseling from Loyola University in Maryland. In 1989, he was ordained as a minister and co-founded Festival Church in Washington, D.C. He served as co-pastor for a number of years.

If Ronald Reagan had not starred in The Code of the Secret Service would he have crossed paths with Jerry Parr? If young Jerry Parr had not watched the movie would he have saved the president’s life more than 50 years later? We will never know the answers to those questions.

Several years after the assassination attempt, Parr shared with the former president how his career was inspired by Reagan’s 1939 movie. He told Reagan, “When you made that movie you determined your destiny… and our destinies were linked.” Reagan commented, “Jerry Parr, you will always be my hero.” Then he laughed, “You know Jerry, that was the worst movie I ever made.”

Jerry Parr died of heart failure in 2015 at age 85. John Hinckley is no longer considered a threat a threat to himself or others. In June 2022, the 66-year-old is scheduled for release from St. Elizabeth’s Hospital.