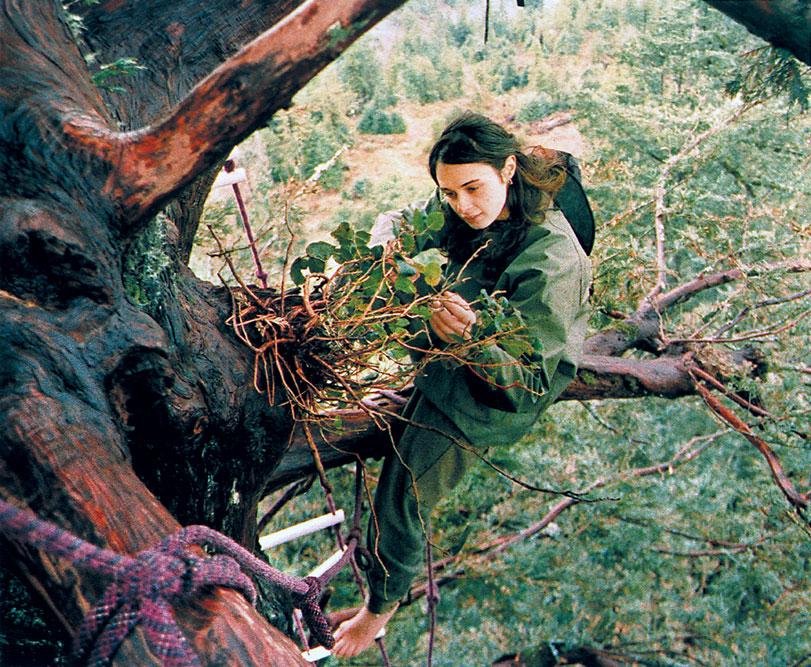 November 1997 – Humboldt, California: When Julia Hill arrived at the Earth First camp, the focal point of the protest was a 1,000-year-old redwood tree, which Earth First had named “Luna.” The 200-foot giant sat high on the peak of a clear-cut hill where it was visible for miles.

Hill agreed to sit in the tree for five days. Her legs were shaking, her heart pounding, the first time she used a carabiner rope to climb 18 stories to the six by eight-foot platform. In December, Hill once again sat in the tree, this time for four weeks.

In her early years, home for Julia Hill was a camping trailer. Her father preached from town to town. In 1997, she saw her first Northern California redwood trees. Hill was so taken by the trees that she returned to Arkansas, sold all her belongings, purchased a tent and camping gear, and moved to Humboldt.

The town was home to Humboldt University and full of environmental activists protesting the clear-cutting of the redwood forests. Hill wasn’t sure what she needed to do. She just knew she wanted to help prevent the magnificent trees from being cut down.

Pacific Lumber, a family-owned business since 1885, had always followed sustainable forestry practices. However, 100 years later, the business was sold to Maxxam Lumber, who began to clear-cut the redwoods to pay down company debt. And the protests started.

By late December, with winter setting in, and Hill in the tree for a month, Earth First leaders instructed her to come down. She refused. She committed to save the tree, and she planned to honor her commitment. Police gave her 24 hours to come down or be arrested. No luck. Loggers threatened to blow up the tree, but Hill remained on the platform.

By late February, after six days of rain, sleet and high winds, Hill was cold, hungry, exhausted and ready to come down. Maxxam guards had created a barricade to try to prevent activists from bringing her food and supplies. They played loud music at night to make sleeping difficult. Hill journaled, “I can’t go one more night with no sleep and with sleet pelting me through the cracks. I can’t do it anymore.” But when 20 protesters risked being arrested and stormed the barricade to bring supplies, their heroics inspired Hill to continue her sit-in.

On Day 71, a photographer climbed to the platform to take pictures of Hill. He challenged her to stay 100 days and break the 90-day record. She wasn’t sure she could last another four weeks. All Hill thought about was a hot shower and a good meal. But she stayed, and at 100 days, a local Sioux Indian tribe held a ceremony in Humboldt and honored her with a “Defender of the Forest” award.

By the six-month point, Hill’s sit-in was world news. Hill’s 24th birthday was covered by the Los Angeles Times, Newsweek, People Magazine and CNN. Hill was now the spokesperson for Earth First. Hill refused to come down until a settlement was reached with Maxxam Lumber to stop the clear-cutting.

More than two years after she scaled Luna, December 18, 1999, Julia Hill, a villain to some and a hero to millions finally climbed down from the tree. She signed an agreement with Maxxam Lumber agreeing to never climb another tree or set foot on Maxxam property. Maxxam Lumber agreed to a 100-year sustainability plan. Hill’s dogged persistence influenced the United States government and the state of California to appropriate $480 million to purchase and protect thousands of acres of old-growth redwood forests.

“Somewhere inside each of us is the power to change the world.”     Roald Dahl