by peteblack4ua@gmail.com | Nov 24, 2020 | Courage Under Fire, Determination Despite the Odds, Overcoming Obstacles | 1 comment 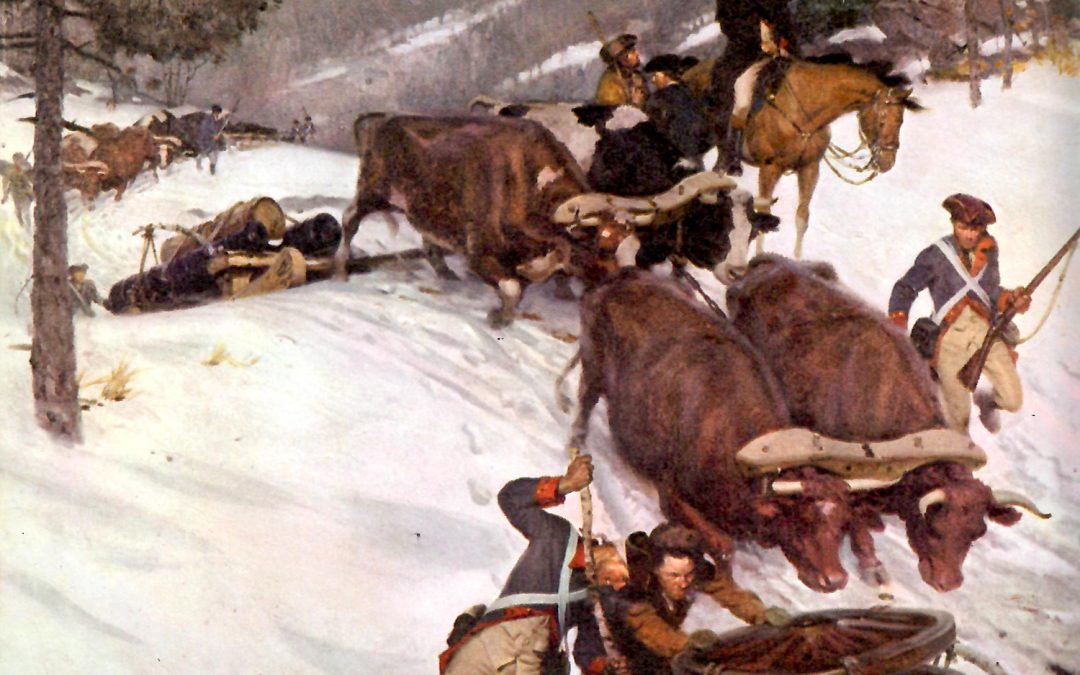 January 1776 – Berkshire Mountains – Upstate New York: The colonial soldiers and volunteers refused to go any further. The mission was too difficult and dangerous. Colonel Henry Knox, a 25-year-old former Boston bookstore owner, pleaded and begged the men to continue. It took three hours of cajoling and an emphatic reminder of what was at stake before the artillery train moved on.

Boston born and bred, young Henry Knox, at 6-foot, 250 pounds, was a jolly giant for his era. He was a lover of books, particularly those pertaining to military science and strategy. With a booming voice and a friendly, outgoing personality, his bookstore was a popular stop for both patriots and British loyalists.

In 1770, with opposition growing against British involvement in Boston, Knox joined a local militia unit. To Knox’s dismay, after the Boston Tea Party in December 1773, England sent 4,000 troops and a large naval fleet to occupy and control the harbor town.

Henry Knox first met General George Washington in Boston on July 5, 1775, less than a month after the Continental Congress appointed Washington commander of the Continental Army. Washington was impressed with Knox and the two men hit it off immediately. Both were gravely concerned that the British were going to burn Boston.

In November, Knox shared a bold idea with Washington. With the capture of Ft. Ticonderoga in upstate New York in May, Knox was aware of 60 cannons that might be moved to Boston to bombard the British troops. But, there was a problem: the fort was more than 300 miles away. Washington presented the idea to his inner circle of generals. Preposterous, they said. Impossible. Against their protestations, desperate, and with no other alternatives, Washington gave Knox the go-ahead.

Knox left on horseback for Ticonderoga in mid-November. He recruited soldiers at the fort, rounded up local volunteers, about 100 men in all, and acquired 80 oxen to pull 42 large sleds that he borrowed or had built. His plan: load the more than 60 tons of cannons on boats and travel 35 miles down Lake George. At that point, he would put the cannons on the sleds and head east to Albany, New York, crossing the Hudson River four times. Then came the most difficult part – crossing over the Berkshire Mountains – and heading 100 miles south to Boston. He would need plenty of snow and ice to make sledding possible.

When Knox reached the end of Lake George, it was unseasonably warm. It wasn’t until a week later that a Christmas Day blizzard dumped two feet of necessary snow. Twice while crossing the frozen Hudson, a sled broke through the ice near shore and the cannon had to be fished out. By the time the procession reached the Berkshire Mountains, they were cold, hungry and worn out.

A couple days after Knox’s rousing speech inspired his team to keep going, the sleds cleared the rugged mountains and the terrain flattened. By now news had spread throughout the region about Knox’s mission. Patriots turned out to meet the artillery procession offering food, cider and most importantly, encouragement. On January 25, Knox’s artillery train arrived outside Boston with all the cannons accounted for.

Washington ordered the cannons to be set up on the highest hills overlooking Boston Harbor. To surprise the British, Knox and his men worked at night for several weeks installing the cannons behind barricades and fortifications. Washington had logs painted to look like cannons to fool the British into believing they had even more artillery.

At sunrise on March 5, British officers were shocked to see a large battery of cannons on the Dorchester Heights overlooking Boston. Three days later, British General William Howe sent a letter to Washington. He would leave Boston without burning the city if Washington did not attack. The British left on March 17, 1776 without a shot being fired.

Henry Knox’s monumental mission saved Boston and was a key turning point in the Revolutionary War. His daring and determination earned him a promotion to chief artillery officer of the Continental Army. The Boston bookseller, a trusted adviser and life-long friend of Washington, would later become the nation’s first Secretary of War.