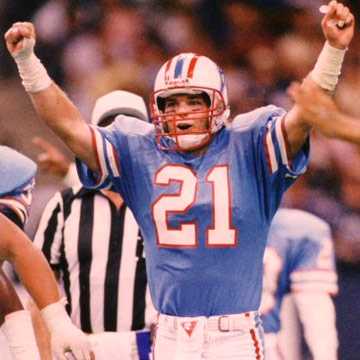 1976 – Delta High School – Clarksburg, California: Ninth-grade defensive back Bo Eason came home from high school football practice discouraged. “Daddy, they measured and weighed us for the program today. I was 5’2” and 100 pounds. The coach told me that I am too small to play.” Without hesitation, his father responded, “Well, gosh darn it, Bo. Did they measure the size of your heart?”

That afternoon Charles Eason, a rancher, told his son a story. “Bo, nothing is more valuable to a rancher than his ranch dog. When a litter of puppies is born, the rancher identifies the smallest puppy, the runt. He ties a ribbon around its neck. The runt must work harder than his brothers and sisters to survive. It becomes the hardest working, the fastest and most determined pup in the litter. At 12 weeks old, the rancher gives away all the puppies except the runt because he knows the runt has the biggest heart and will be the best at herding his livestock.”

Bo, the youngest of six children, took his father’s message to heart. That night they wrote out a plan. At the top of a sheet of paper, Bo wrote, “To be the best safety in the National Football League.” He vowed to work the hardest of any player. Bo would be the first player on the practice field and the last to leave. He began 5 a.m. daily workouts.

Bo and his older brother, Tony, played together on the 250-student Delta High School football team. Tony was a gifted 6’ 4” quarterback, and Bo was a 5’ 4”, 140- pound safety. Tony signed a college scholarship with the University of Illinois, where he became a star.

There are 775 colleges that play football in America, but none offered the runt a scholarship. He invited himself to walk on at the University of California – Davis, 25 miles from home. The school didn’t offer scholarships.

Bo showed up on the first day of practice and talked the grouchy equipment manager into issuing him a practice uniform. His uniform did not match the others, but Bo didn’t care. After practice, Head Coach Jim Sochor stopped Bo coming off the field. “Ah, Mr. Eason. You do not belong here. You are too small to play college football. Turn in your equipment, and get out of here,” Sochor said as he walked away.

Bo slept in his old ford pickup that night. He was back at practice the next day. And the next day. Sochor ignored him. In the first ballgame, with his team winning by a lop-sided score, Bo somehow managed to get himself on the field on the kickoff team. He raced down the field and made a violent tackle on the ball carrier. On Monday afternoon, there was a new practice uniform and a game jersey in Bo’s locker.

During his sophomore season, Bo Eason’s body finally caught up with his dream. He became a 6’ 2”, 200-pound standout safety for the UC – Davis Aggies. He is one of two Aggies to have their names on the football stadium wall.

More than one million kids play high school football each year, and less than 0.02% of them play in the NFL. Bo and Tony Eason beat the odds. Tony was the 15th overall pick by the New England Patriots in the 1983 draft, leading them to the Super Bowl three years later.

In the 1984 NFL draft, Bo Eason was the first safety selected, going to the Houston Oilers. He made the All-Pro team in his second season and played for Houston for five seasons before a seventh knee surgery forced him to retire.

Bo often reminded himself about the runt of the litter story. He says of his success, “You might not be the biggest, or fastest or most gifted. None of that really matters, not when you are on a quest to be the best at what you do. You will succeed or fail based on the stories you tell yourself.”