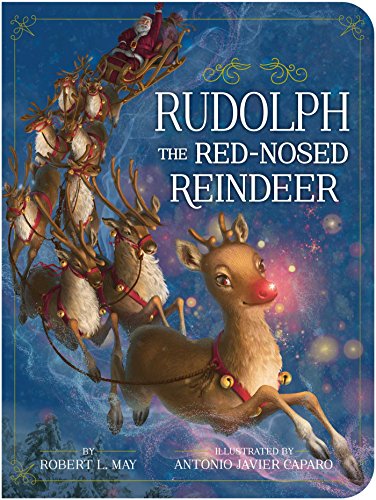 March 1939 – Montgomery Ward Department Store – Chicago, Illinois: Looking for a cheaper holiday gift than the coloring books they had given to customers for years, the Chicago-based department store decided to create a children’s Christmas book. The assignment fell to Robert May, a 35-year-old ad writer in the marketing department. “Write a cheery children’s book for Christmas shoppers,” he was told, “and make it an animal story.”

Robert wasn’t feeling very cheery. His wife, Evelyn, was in the final stages of a two-year battle with cancer. He struggled to take care of her and their young 4-year-old daughter, Barbara. The family was heavily in debt due to mounting medical bills. Robert, who had hoped to write the great American novel, was grinding out ads describing tools, furniture and appliances. Now to make matters worse, the boss wanted the Jewish guy to create the Christmas book.

Robert grew up in a not-so-devout Jewish family in New Rochelle, New York. In 1926, he earned a psychology degree from Dartmouth University. He got his first job as an ad copywriter at Macy’s department store in New York City. In the summer of 1932, the Great Depression cost Robert his job at Macy’s. After bouncing between jobs, he landed the ad writer position at Montgomery Ward in 1936.

Robert struggled with the Christmas book assignment. When he and Barbara visited Chicago’s Lincoln Park Zoo, he decided to use a reindeer, already a popular Christmas animal, as his central character. Robert thought of his painful childhood. He was a small, sickly child bullied by his classmates. He decided to create a story of a small underdog reindeer with a big heart.

When Evelyn died in late July, Robert’s boss offered to relieve him of the project and have someone else write it. Robert declined his offer. Working at home and in his spare time at the office, he finally finished the book in late August. He read it to Barbara. She loved the story, Rudolph the Red-nosed Reindeer, and they read the book every night.

Montgomery Ward first distributed the Rudolph book during the 1939 holiday season. Shoppers loved it – more than 2.4 million copies were given away. Wartime restrictions on paper use prevented a reissue of the book until 1946. Still, that year Montgomery Ward gave away another 3.6 million copies.

Robert May never received more than his salary for his successful book, but that changed in January 1947. Montgomery Ward President, Sewell Avery, decided to sign over 100% of the book’s copyright to Robert, who immediately set out to find a publisher. Initially, no one wanted to publish a book because Montgomery Ward had already given away six million copies to customers.

Robert eventually found a publisher in New York City, a little guy with a big nose named Harry Elbaum, the head of Maxton Publishers. Harry knew what it was like for Rudolph and took a chance on the book. Maxton published 100,000 copies of Rudolph just in time for the 1947 Christmas season. The hardcover book sold for 50 cents and was a huge success.

Almost a decade after Robert wrote the book came the song. In 1948, he persuaded his successful brother-in-law, songwriter Johnny Marks, to write the words and the music for an adaptation of Rudolph.

Marks pitched the song to several celebrity singers, including Bing Crosby, who turned down the silly children’s song. Hollywood movie star and singing cowboy Gene Autry also turned down the opportunity. It didn’t fit his tough cowboy image. But after Gene’s wife, Ida, heard the song, she persuaded him to record it in Hollywood in June 1949. By Christmas, the song reached No. 1 on pop charts across America.

Today, Rudolph the Red-nosed Reindeer remains in the top five best-selling Christmas songs of all time with more than 12 million copies sold and book sales have topped 25 million copies. More than 80 years ago a Jewish ad writer, during a very difficult time in his life, refused to take the boss’s easy way out. His little underdog reindeer will go down in history as one of the most iconic Christmas characters ever created.