by peteblack4ua@gmail.com | Feb 4, 2019 | Beating the Odds, Chasing Your Dream, Determination Despite the Odds | 3 comments 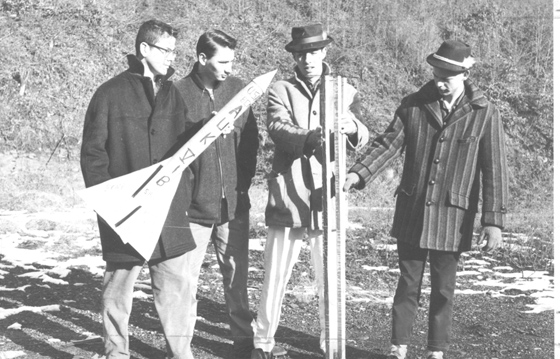 October 5, 1957 – Coalwood, West Virginia: Homer Hickam read about the Russians launching Sputnik, the first satellite into orbit, in the Bluefield, West Virginia Daily Telegraph. For the next several nights, the 14-year-old stood in the yard with his mother to watch Sputnik pass overhead. Homer’s father called him an idiot. He scoffed at the idea that President Eisenhower would let a Russian satellite fly over West Virginia.

If ever a boy was destined to become a coal miner it was Homer Hadley Hickam Jr. His father was the mining superintendent in Coalwood, West Virginia, a small town created by the Olga Mining Company. The company built the houses, the churches, the stores, and the doctor and dentist offices. Four of Homer’s uncles were coal miners and his grandfather lost both legs in a mine accident. There were two career paths for the young men who grew up in Coalwood – coal mining or the military.

Homer’s father idolized Homer’s brother Jim, a high school football star. When Homer got cut from the football team and joined the band, his father was ashamed. He hoped Jim would get a football scholarship and he assumed Homer would be a clerk in the mine. But Homer and his mother had a secret dream that he would get away from the mine and far away from Coalwood.

A month after the Sputnik launch, Homer announced at dinner that he was going to be a rocket scientist like Werner Von Braun. His father ignored him; Jim laughed, and his mother, trying to be supportive, commented, “Well, don’t blow yourself up.” Privately, she told Homer, “You’ve got to convince your father that you are smarter than he thinks. I believe you can build a real rocket.”

Homer read everything he could find about building rockets. He recruited five of his buddies and formed the Big Creek Missile Agency (BCMA). When rocket number three flew into the side of his father’s office at the mine entrance, his furious dad poured out the remainder of the rocket fuel that Homer had purchased with his paper route money.  At his wife’s urging, Homer’s father found a mile-long barren coal flat for rocket launches. The boys named it Cape Coalwood.

Employees from the coalmine machine shop began building two and three-foot rockets for the boys out of scrap metal. Powered by a new fuel that the high school chemistry teacher bought for the project, rocket number 20 reached an altitude of 4,000 feet. On a Saturday morning, the launch of rocket number 23 drew 300 people and the local newspaper to watch the four-foot rocket soar to 7,000 feet in a 42-second flight. Rocket number 25, propelled by a new fuel climbed to 15,000 feet.

During Homer’s senior year at Big Creek High School, his rocket project won first place at the state science fair and a gold ribbon at the national science fair. The BCMA team shot their final six rockets on the Saturday following their high school graduation. Several thousand people attended the event. Homer’s father, who had never attended a launch, lit the fuse on their final rocket, a 6.5-foot long masterpiece, which shook the valley as it blasted to an altitude of six miles.

In 1964 Homer earned an industrial engineering degree from Virginia Tech University and after working for the U.S. Missile Command for 10 years, became a NASA aerospace engineer at the Marshall Space Flight Center in Huntsville, Alabama. During an 18-year career with NASA, he trained astronauts for numerous space shuttle and space lab missions.

When his father died, Homer found a small box that his dad had saved. It contained Homer’s science fair gold medal and a rocket nozzle. In 1997, the space shuttle Columbia launched with Homer’s National Science Fair Gold Medal on board – after all those years the Big Creek Missile Agency had finally made it into space.