by peteblack4ua@gmail.com | Apr 23, 2018 | Chasing Your Dream, Limitless Possibilities, Never Give Up 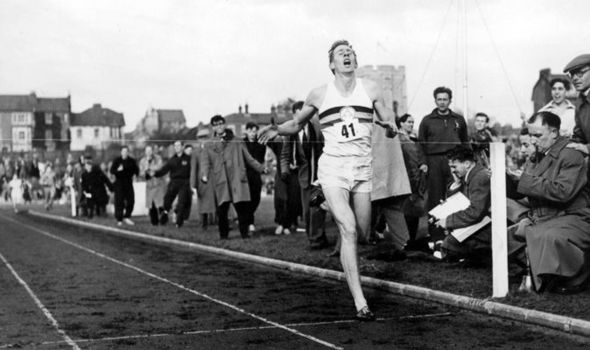 May 6, 1954 – Oxford University – Oxford, England: The day dawned with heavy rain and strong, gusty winds. It was not weather conducive to running and he thought about dropping out of the scheduled race that afternoon at the old Iffley Road Track on the Oxford University campus. Word had gotten around that he was hoping to break the one-mile world record, and by race time the wind and rain had subsided and 3,000 people lined the track.

The featured event, the mile run, began at 6 p.m. He completed the first quarter mile lap in second place with a time of 57.5 seconds. Although still running in second place at the race mid-way point, he was on a world-record-breaking pace of 1 minute 58 seconds. Then the pace slowed and the runners completed the third lap at the 3-minute mark. On the final lap, with 275 yards to go, he made his move to the front of the pack and outdistanced the field to win the race.

He thought he might have broken the record but he would not know until the time was announced. In the era before electronic scoreboards, time was kept with a stopwatch on the track and finish times were announced over a public address system. The announcer added to the suspense of the moment by delaying the results.

Finally a voice crackled over the loudspeaker, “Ladies and gentlemen, here is the result of event nine, the one mile. First, R.G. Bannister of Exeter and Merton Colleges, in a time which, subject to ratification, is a new track record, British record, European record, and world record – Three minutes and…”

The roar of the crowd drowned out the rest of the announcer’s words. Roger Bannister, a 25-year old Oxford University medical student, had just done what many people thought was not possible; he had broken the four-minute mile barrier with a time of 3:59.6 seconds. In 1954 Sports Illustrated dubbed it the most significant athletic event of the 20thcentury, featured Bannister on the magazine cover, and honored him as their Sportsman of the Year.

Roger Gilbert Bannister was born in Harrow, England, on March 23, 1929. In 1946 as a seventeen-year old college student at Oxford, he was inspired to begin running by British runner Sydney Wooderson, who had set the British record for the mile at 4:04. Bannister’s lanky six foot two inch frame, long legs and long strides, were ideal for the mile run.

By 1952 Bannister was England’s top middle distance runner and a heavy favorite to win the 1,500-meter (metric mile) event in the Helsinki Olympics. Although he broke the Olympic record time for the 1,500-meters, so did the three medal winners. He finished a disappointing fourth place and failed to medal in the Olympic event.

Bannister was so distraught that his performance had let England down that he considered quitting the sport and focusing on medical school. However, after taking two months off from running to think about his future, Bannister set his focus on breaking the seemingly insurmountable four-minute barrier. The mile record had been stuck at 4:01 for nine years. Many people thought the four-minute mark was unbreakable. Several prominent medical journals speculated that it might be physiologically impossible, and dangerous, for the human body to run that fast.

Someone has said the impossible is that which nobody can do, until somebody does it. Bannister’s sensational sub four-minute mile did not remain the world record for long. Forty-six days later, Australian John Landy lowered the record by almost two seconds when he ran a mile in 3:57.7 seconds. By 1957 the record was down to 3:54.

In the sixty years since Roger Bannister did the seemingly impossible, more than 1,300 runners have broken the four-minute mile time. The world record has been broken 18 times and the current world record is 3:43 held by Moroccan Hichan El Guerroui.

A few months after his historic run, Roger Bannister retired from competitive racing to pursue a career in neurology. While he will always be proud of breaking the four-minute mile barrier, he is even more proud of what he accomplished during forty years as a neurologist.

July 10, 2012 – 2012 Summer Olympics – London, England:  Eighty-three year old running legend Roger Bannister carried the Olympic Torch at the site of his historic run, in the old stadium that is now named for him. “I almost didn’t race that afternoon because of the weather,” reminisced Bannister, “I am glad that I did as I might not have gotten another chance.”