by peteblack4ua@gmail.com | Aug 29, 2017 | Determination Despite the Odds, Iron-willed, Overcoming Adversity 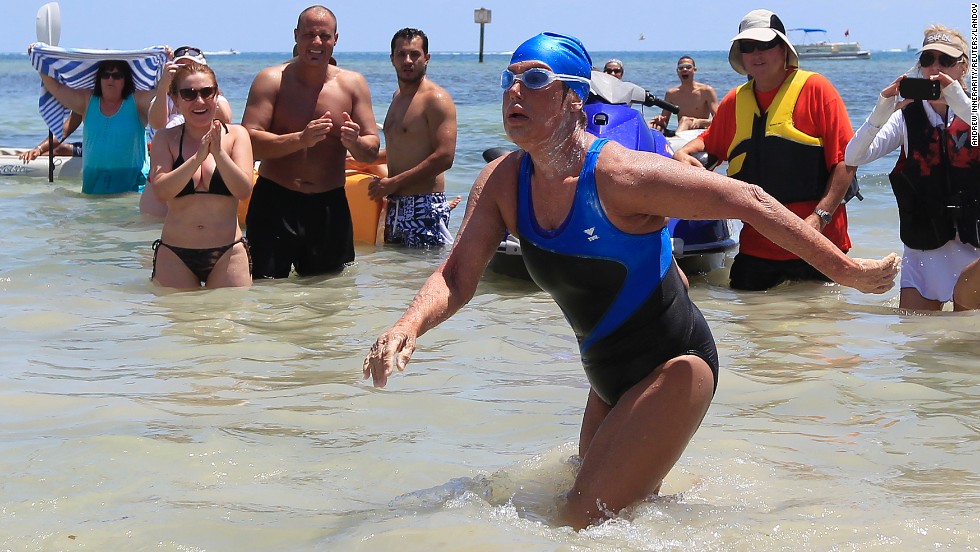 When Diana Nyad was five years old, her father, who was of Greek descent, pointed to her name in the dictionary – Diana, a Greek goddess, and said to her, “Some day you will be a famous swimmer like Diana.” By the time Nyad discovered that her Greek namesake had nothing to do with swimming, but rather was the goddess of the moon and hunting, it was too late. She had become obsessed with swimming.

Nyad won three Florida high school state championships in the backstroke and while at Lake Forest College in Illinois, she was introduced to long distance swimming. In 1970, she set a women’s world record of four hours and 22 minutes while swimming in her very first ten-mile race in Lake Ontario. By her early twenties, Nyad was becoming a star in the still new sport of open water distance swimming. In 1975, during her second attempt to swim around New York’s Manhattan Island, she broke a 50-year-old record with a time just under eight hours.

In 1978, at age 28, Nyad set her sights on breaking the open ocean distance record of 58 miles. She decided to swim from Havana, Cuba, to Key West, Florida, a distance of 110 miles. She made it about 50 miles in 42 hours before giving up due to high waves and severe jellyfish stings. A year later, she smashed the record by swimming 102 miles from the Bahamas to Florida, walking on to the beach in the early morning hours of her 30th birthday. Afterwards, Nyad declared that she would never swim again.

Over the years, Nyad earned a master’s degree in literature from New York University. She worked as a sports commentator for Fox Sports and CBS, covering Olympic and world swimming championships. She also did international travel documentaries and had a regular program on National Public Radio. As her 60th birthday loomed on the horizon, Nyad realized the fire had gone out of her life. She needed a big audacious goal to re-fire her competitive spirit and she quietly decided to attempt the difficult Cuba to Key West swim, which had eluded her three decades before. The Florida Straights are notorious for large sharks, nasty jellyfish, and rough Gulf Stream currents.

In addition to training, Nyad had to raise money and recruit sponsors to help her. No small task for a 60-year-old who had not swum in 30 years. She needed to cover the cost of boats, and a large support team, which included shark experts, oceanographers, medical advisors, and nutritionists. Nyad began her training by swimming six hours a day in a lap pool before moving to open ocean and tackling 12 to 16-hour swims every other day. After several 24-hour swims, she was ready.

On August 7, 2011, more than 33 years after her first attempt at the Cuba to Key West swim, Nyad entered the water at Havana, Cuba, but strong currents and winds pushed her miles off course and after 29 hours in the water she chose to abort the swim. About a month later, she began a third attempt but after 41 hours and 67 miles she had to stop because of jellyfish stings and unfavorable currents. On August 18, 2012, Nyad began her fourth attempt, but after two days of swimming she once again decided to stop the swim due to thunderstorms and numerous jellyfish stings to her face.

Refusing to give up on her goal, on August 31, 2013, Nyad began the fifth try at the 110-mile swim. This time she was protected from jellyfish by a specially designed silicone facemask, a full bodysuit, gloves, and booties. She also benefited from good weather conditions, favorable currents, and less jellyfish. At 1:55 p.m. on Monday, September 2, 64-year-old Diana Nyad became the first person to complete the difficult Cuba to Florida swim when she reached the beach in Key West, Florida, 52 hours and 54 minutes after entering the water in Havana, Cuba. Before collapsing into the arms of her chief trainer, Nyad told the crowd gathered, “Never, ever give up; you’re never too old to chase your dreams.”

Before her fifth attempt, Nyad had stated that it would be her last try. Those closest to her joked that on her fifth attempt Mother Nature finally relented, realizing that Nyad would not be denied her goal and that she would die trying.

Today, Diana Nyad is working on a new goal. In 2016, she founded EverWalk Nation, a project to get one million people to pledge to walk three times a week. On Sunday October 23, 2016, she led hundreds of people on a 145-mile walk down the California coast from Los Angeles to San Diego. Nyad is a member of the National Women’s Hall of Fame and the International Swimming Hall of Fame.