by peteblack4ua@gmail.com | Feb 22, 2019 | Courage Under Fire, Determination Despite the Odds, Perserverance | 2 comments 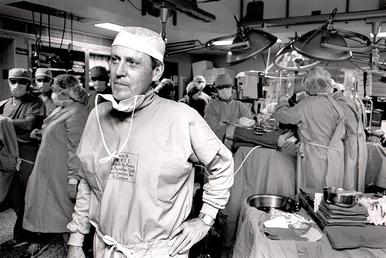 1964 – University of Colorado Hospital – Denver, Colorado: Dr. Thomas Starlz shut down his experimental liver transplant program. “We flopped, he lamented, “We just failed.” He had been crucified in national newspapers and medical bulletins. Some accused him of playing God. Others labeled him a child killer. He was a healer, a pioneer, not a killer. He knew liver transplants were possible – he had been successful in dogs. But maybe they weren’t worth the risk.

Thomas Earl Starlz was born in Le Mars, Iowa, in 1926. His father was a newspaper editor, and as a youth, he worked various jobs at his father’s newspaper and earned his Eagle Scout badge. His mother wanted him to be a surgeon. While he was in college, she died after a difficult battle with breast cancer, and Starlz decided to go to medical school.

Starlz earned his B.S. degree in biology from Westminster College in Missouri and attended Northwestern University Medical School in Chicago, graduating in 1952 with a Ph.D. in neurophysiology and his medical degree. He did surgical residencies at Johns Hopkins University and the University of Miami before returning to join the medical staff at Northwestern.

During his residency, Starlz became interested in liver diseases, particularly liver cirrhosis. While several of his colleagues set out to find the cure for cancer, Starlz, to the ridicule of some in the medical community, wanted to do what no one had ever done – perform liver transplants.

In 1958 while on the Northwestern surgical staff, Starlz performed his first liver transplant on dogs that he got from the animal shelter. In his initial experiments, all of the dogs died within two days. A year later, he found a way to stabilize blood circulation and the dogs lived a few weeks. By 1962 Starlz, after approximately 200 experiments, was successfully performing canine liver transplants in his new job on the medical staff at the University of Colorado in Denver.

Between March and October 1963, five years before the first heart transplant, Starlz attempted five liver transplants on humans. His first patient was a three-year-old boy with a disease called biliary atresia. The child’s blood would not clot and he bled to death during the operation. Starlz was devastated and widely criticized.

During Starlz’ second operation on a man with liver cancer, he administered large doses of fibrinogen, a protein that forms blood clots. The patient died three weeks later from complications due to blood clotting. Starlz other three transplant patients died within a few weeks.

The public and medical community sentiments were so strong that Starlz was ordered to shutter the program in early 1964. Although in unchartered waters, Starlz knew a successful transplant was possible. He needed better surgical techniques and most importantly, he needed a drug to prevent the body from rejecting the liver.

Today, thousands of liver transplants are performed each year in the United States thanks to Thomas Starlz’ pioneering efforts. Surgeons around the world use the procedures and drugs that Starlz tediously developed on dogs and then humans. Dr. Thomas Starlz, known in the medical field as “The Father of Modern Transplants” died in 2017 at age 90. He worked up until the day he died