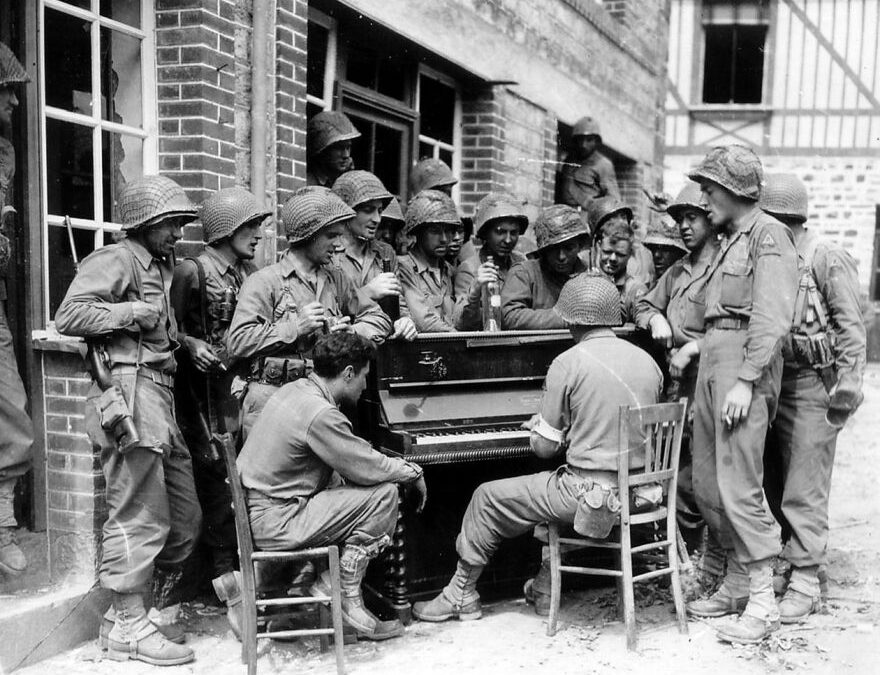 May 6, 1943 – Somewhere in North Africa: The soldiers watched as the B-17 Bomber slowly descended. Unknown to them, this huge bomber was being used as a cargo plane. The usual 4000 pounds of bombs had been replaced with pianos. Two crates parachuted down to the awaiting troops when the cargo bay opened.

Private Kenneth Kranes wrote his mother in upstate New York: “Two nights past we received welcome entertainment when a jeep pulling a small wagon came to camp. The wagon contained a Steinway pianna (sic). It is painted olive green, just like the jeep. We all got a kick out of it and sure had fun after meals when we gathered around the pianna to sing.”

In 1853 Steinway and Sons produced their first piano in Queens, New York. By World War II, the company was one of America’s top four piano producers. When the war began, the government prohibited Steinway from manufacturing pianos because iron, copper and brass were needed to produce guns and artillery. Instead of shutting down the factory, Steinway manufactured wings and tails for troop transport planes and coffins for the National Casket Company.

In December 1941, Theodore Steinway, the company president, who had four sons in the military, got an idea…maybe he could build a small piano that could fit in a crate and be parachuted behind enemy lines so soldiers could have music to boost troop morale. Steinway figured convincing the War Production Board would be a complicated matter. He was wrong.

Within six months, Steinway had a rugged and durable piano design that could be dropped from an airplane. The first prototypes were approved by the military. Production began in the summer of 1942 with a reduced staff, composed mainly of women because many of the male employees were off at war.

Steinway named the 40-inch-tall pianos Victory Verticals. The pianos had no front legs because they were thought to be too fragile for the battlefield and were sealed with water-resistant glue to make them moisture-proof in tropical environments. They also received termite and anti-insect treatment, and the keys were covered in celluloid, not ivory. Bass strings were wound in soft iron instead of copper. The pianos came in three colors, drab olive for the Army, blue for the Navy and gray for submarines.

The pianos contained only 33 pounds of metal, about 10% of the usual amount, weighed just 450 pounds and included handles under the keyboards and on their backs so they could be carried by four soldiers. The wooden crate included a piano tuning kit, repair parts, and sheet music for Protestant hymns and popular songs of the day.

Cargo planes transported the military pianos to every theater of the war. To the delight of the troops, pianos rained from the sky across Europe, Asia, North Africa and the South Pacific. Anybody who could play, whether good or bad, usually did. The pianos provided soldiers with countless hours of entertainment and diversion as they gathered around them for both informal sing-a-longs and impromptu worship services.

Pianos found their way to battlefields, a military dance band in the Philippines, military hospitals and countless USO shows and concerts for the troops. Comedian and entertainer Bob Hope performed with a G.I. piano. When “Janie,” an olive drab Victory Vertical took Japanese shrapnel from front to back mid-piano, soldiers went to work immediately removing hammers and wires from the extreme low and high notes to replace the damaged ones. In a few days, the piano was back playing night and day.

During the war, Steinway produced more than 3,000 pianos designed specifically for troops on the battlefield. Pianos provided comfort and happiness, frequently reminding soldiers of home and what was important. Until his death in 1957, Theodore Steinway received hundreds of letters from soldiers who had been encouraged and comforted by his pianos from heaven.