by peteblack4ua@gmail.com | Nov 28, 2017 | Against the Odds, Chasing Your Dream, Persistence 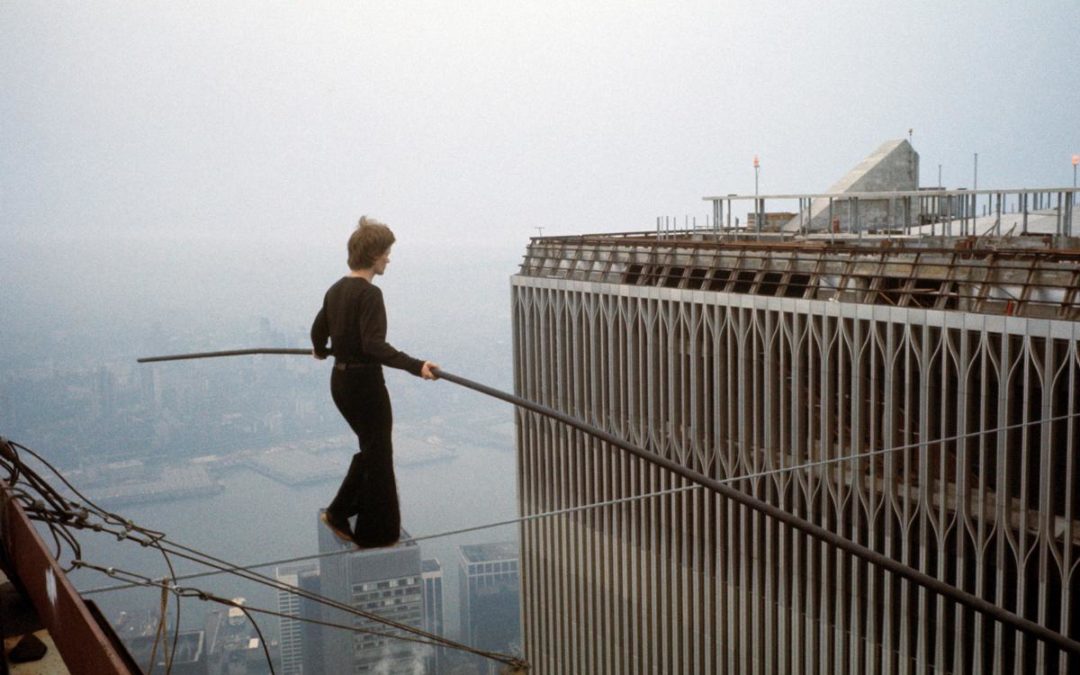 In 1968, eighteen-year-old Philippe Petit was reading a magazine in a Paris dentist office when an article, a picture, and a dream captivated him. The article was about the construction of twin towers in lower Manhattan in New York City, that when completed would become the tallest buildings in the world. Petit, who at age 15 had taught himself to walk on a wire, tore the article out of the magazine, stuffed it in his pocket, and vowed that day that he would stretch a cable between the towers and walk across the sky.

Petit was born in Nemours, France, a suburb of Paris, on August 13, 1949. His father was an author and former French army officer. An unusual and rebellious child, at an early age Petit climbed anything that did not move and taught himself magic and juggling. He stretched a rope between two trees on the family estate and spent a year learning to adeptly walk on it. As a teenager he was kicked out of five schools for picking his teachers’ pockets and doing magic tricks. At 18, much to his father’s chagrin, Petit moved to Paris where he worked on street corners as a mime, magician, juggler, and tightrope walker.

Construction of the north tower of the World Trade Center was completed in 1970, followed by the south tower in 1972. Petit, seized by the idea to walk between the towers, collected all the information he could find about the gigantic buildings. He traveled to Czechoslovakia to learn the rigging and securing of wire cables from Dr. Rudolph Omankowsky who trained circus high-wire performers. When he shared his dream with the famous teacher, Omankowsky encouraged him to use a small safety wire for protection and told him, “You need to have passion and you have to work madly, to practice all day long…or you will die.” Petit taught himself all the tricks you could do on a wire: front and back somersaults, riding a unicycle, bicycle, and sitting in a chair.

On June 26, 1971, Petit mesmerized those on the streets of Paris when he strung a wire 250 feet in the air and walked between the spires of the Notre Dame Cathedral, only to be arrested when he came down. In June 1973, he walked between the towers of the world’s tallest steel arch bridge in Sydney, Australia. In January 1974, Petit moved with his girlfriend, Annie, to New York. They immediately took the subway to the World Trade Center. Looking up from the base of the tower, Petit stood in awe of a building “stretching into the sky.” He told Annie, “It is impossible, impossible! My dream is dead!” Then he and Annie snuck up to the roof and Petit breathed, “It is impossible, but I know I will do it.”

Over the next few months, Petit and his support crew made over 200 trips to the towers to plan the walk. They frequently disguised themselves as construction workers or deliverymen in order to slip past security guards. They measured the distance between the towers, observed the effects of weather conditions and wind speeds, and figured out how to safely string the wire cable between the corners of the towers. After the guards ran him off on several occasions, to the relief of his crew, a dejected Petit considered alternative locations at the George Washington Bridge or Rockefeller Center for his walk. But, although told repeatedly by his crew that he was insane, the World Trade Center towers drew him like a magnet.

After changing the walk date 11 times due to complications and delays, the crew snuck into the World Trade Center the night of August 6, 1974 and rigged the wire. At 6:00 AM the next morning, using a 25-foot long balancing pole, Petit stepped off the south tower on to a wire 110 stories, a quarter mile, above the streets of New York City. With “extreme fear, and great joy and pride,” he crossed to the north tower and sat down on the corner of the building. Dream accomplished. Then the south tower beckoned to him. In a 45-minute period, while traffic snarled and a huge crowd gathered below, Petit made eight crossings on the 134-foot long wire. He sat, lay down, and danced on the wire before exiting into the arms of policemen.

Today, Petit lives on a farm in upstate New York. He has made dozens of high wire walks, including crossings above Niagara Falls and one of the valleys of the Grand Canyon. He has written eight books and lectures on various subjects around the world. He owns the distinction of having been arrested over 500 times in his bizarre career, and while 12 men have walked on the moon, only one, Philippe Petit, has walked across the sky between the World Trade Center towers.

“Would anyone but a crazed person do this? I am a prisoner of my dream.”      Philippe Petit