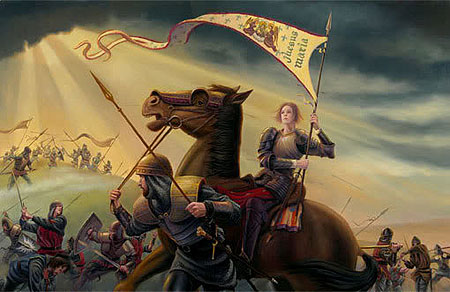 1425 A.D. – Doremy, France: At age 13, she was in her father’s garden when she saw a bright light and heard a voice that told her, “Be a good girl. Great things are expected of you.” Frightened and confused, she dared not tell her parents. What would they think about her hearing voices? During the next five years the voice led the young maiden on one of the most improbable adventures in history.

Jeanne d’Arc was born in 1412 in a small village in northeast France during the Hundred Years’ War, a period in history when England and France were frequently at war. At the time of her birth England had gained control of most of France.

Following Jeanne’s first supernatural encounter, angels appeared occasionally to her with messages. She believed one angel to be the Archangel Michael. By age 16, the messages came so frequently she could no longer ignore them. Jeanne’s mission was clear, but overwhelming. She was to raise an army, bring Prince Charles to the French throne and liberate France by driving the English off French soil.

In May 1428, Jeanne persuaded an older cousin to go with her to talk with the commander of the fortress at Vaucouleurs, France. The commander thought Jeanne was a lunatic and admonished the cousin to have her parents give her a good beating. Jeanne’s second trip to see the commander had a similar outcome. Still, the voices persisted. On her third visit in February 1429, the commander had a priest at the meeting. Reminded of an old prophecy about a young virgin from northeast France liberating France from England, the priest believed Jeanne’s story.

Jeanne first met Prince Charles at Vaucouleurs on March 6, 1429. “I am Jeanne the maiden,” she told him. “I have been sent by God to take you to Reims to be anointed king.” Then she shared a prayer Charles had once prayed asking God to free France from England. He, too, believed Jeanne was the maiden of the legendary prophecy. But as a precaution, Charles had Jeanne vetted by Catholic Church authorities to verify that she was a virgin and not a witch.

As the story spread, men flocked to Vaucouleurs to become soldiers. Jeanne sent word to the English, “In the name of God, be gone, or I will make you go.” They responded, “Shall we surrender to a woman? She is a witch.” On April 29, 1429, approximately 4,000 French soldiers marched into Orleans, with Jeanne, suited in armor and waving the French flag, at the front.

The battle for Orleans lasted eight days. Despite being shot through the shoulder with an arrow, Jeanne remained on her horse at the front. Her courage inspired a French victory. On July 17, 1429, Jeanne escorted Charles to Reims and he was crowned King Charles VII of France.

The English captured Jeanne in May 1430 and accused her of being a witch. She was chained and put in prison and charged with witchcraft, heresy and dressing like a man. She remained steadfast that God had ordained her mission. After a year of interrogation and being threatened with death, Jeanne finally recanted her story. On May 30, 1431, Jeanne d’Arc was convicted of witchcraft and burned at the stake.

The memory of Jeanne d’Arc’s courage and sacrifice inspired the French troops for almost two decades. In 1449, after years of skirmishes, the prophecy was fulfilled, and the last of the English were finally driven off French soil. In 1456, the Catholic Church vindicated the young heroine and the charges against her were annulled. In 1920 Pope Benedict XV declared Jeanne d’Arc (Joan of Arc in English) a saint in the Roman Catholic Church.