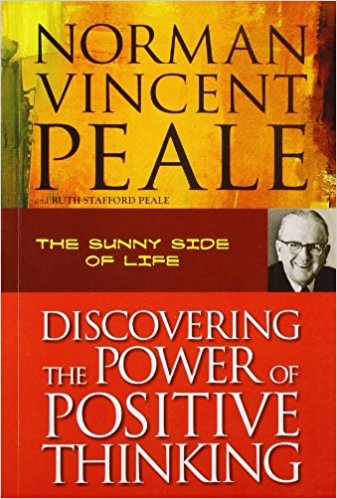 1952 – Bell Fountaine, Ohio: Although his church congregation stood behind him, the 54-year-old minister was so upset by the negative reaction to his new book that he penned his letter of resignation. But before he quit the ministry, he took the train to visit his father in Ohio to ask his advice.

From his rocking chair, the elderly father advised, “Norman, you have always been true and loyal to your faith. You have blazed new pathways of positive thinking to counter the old destructive negative ones.” At this point his father was silent for a long and thoughtful moment, “Besides, and remember this, the Peales never quit. It would break my heart if one of my sons was a quitter, afraid to stand up to face any situation.”

The father was a kind, gentle Methodist minister whom Norman had never heard utter a swear word. So he was astonished to hear his father conclude the conversation with, “And Norman, there’s just one more thing – tell them to go to hell.” After this visit, Dr. Norman Vincent Peale tore up his resignation and threw it in the wastebasket. He returned to his Marble Collegiate Church in New York City.

In May 1898, Norman Vincent Peale was born in tiny Bowersville, Ohio, population 300, the son of the local Methodist minister. He earned a B.S. degree from Ohio Wesleyan University and his Masters from Boston University Theological School in 1924.

Norman’s first pastorate was at a Methodist Church in Berkeley, Rhode Island. At age thirty-four, he met his wife Ruth, changed his denomination to Dutch Reformed and became pastor of the 300-year-old Marble Collegiate Church in New York City.

Norman published his first book The Art of Living in 1937 and a second book A Guide to Confident Living a decade later. But it wasn’t until 1952, when he published The Power of Positive Thinking that Dr. Norman Vincent Peale became famous to many and infamous to some.

He planned to title his book The Power of Faith but the publisher, Simon and Schuster, insisted on The Power of Positive Thinking picking up on a small inconsequential phrase from the book. Dr. Peale was surprised by the immediate success of the book. It was on the New York Times Best Seller List for 186 weeks, still the third longest period in the history of the list.

Not all of the reviews were positive, however. Dr. Peale was shocked by the angry, negative criticism he received from all walks of life, but especially from the psychology and religious communities. Hate mail poured in and he was attacked in national newspapers and from numerous pulpits.

One well-known psychologist called the book “The Bible of American Autohypnotism, disguised by the use of religious terms.” The Yale Divinity School feared the book would create cults, “Where God becomes sort of a master psychiatrist who will help you get out of your difficulties.” A leading minister commented, “This kind of preaching is making Christianity a cult of success.”

After receiving the advice of his father, Dr. Peale returned to the pulpit at the Marble Collegiate Church determined to endure the hatred and criticism by choosing to love his critics. The Power of Positive Thinking sold more than 20 million copies and is translated into 41 languages. Dr. Peale started Guidepost Magazine, which grew to 15 million monthly subscribers. He remained at the Marble Collegiate Church for fifty-two-years.

Dr. Norman Vincent Peale’s “power of positive thinking” has permeated the language and culture, not only in America, but the world. Billy Graham said of Dr. Peale, “I don’t know of anyone who has done more for the kingdom of God than Norman Peale, or has meant any more to my life for the encouragement he has given me.”

When Dr. Peale was in his 90’s, a colleague commented, “Dr. Peale has finally outlived all his critics,” but another colleague quickly corrected him by saying, “No, he has out loved them.” Norman Vincent Peale died Christmas Eve, 1993 at the age of ninety-five.