by peteblack4ua@gmail.com | Feb 21, 2018 | Courage Under Fire, Refusing to Quit, Underdogs 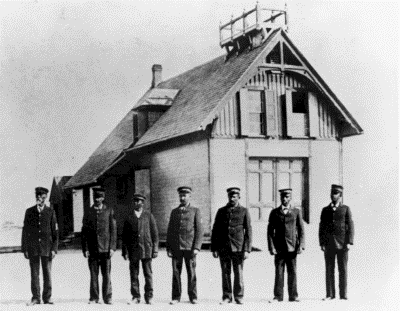 Pea Island, North Carolina, June 1878: Station No. 17, the Pea Island Life Saving Station, was created as one of 18 stations on the outer banks of North Carolina. Congress established the stations to help rescue passengers and cargo in the event of a shipwreck – a common occurrence at the time. The stations were manned with a keeper, who was the commanding officer, plus six surf men and were located six miles apart along the barrier island beaches.

Stations were manned from April through November, the stormy months on the calendar. Surf men manned towers to constantly observe the ocean and walked beach patrol between the stations around the clock. The teams used two rescue methods. They either rowed out to the wreck in a wooden surfboat, or they fired a Lyle Gun, a small cannon that shot a lifeline to the ship; then a pulley system was rigged to bring passengers to shore.

Spring 1880: The Station Keeper and No. 1 Surf Man for the Pea Island Station were not at their post when a ship wrecked and over 100 passengers drowned. As a result, they were fired for dereliction of duties and Richard Etheredge, a 38-year-old Civil War veteran, was promoted to keeper. Etheredge, who had been the No. 6 Surf Man at the Body Island Station, was the first black man to serve as a keeper in the U.S. Life Saving Service.

Etheredge had been born a slave on Roanoke Island, North Carolina, in 1842. He grew up fishing, oystering, and piloting boats on the North Carolina coast for his owner, John Etheredge. Although against the law, his owner taught him to read and write. In 1863, Richard Etheredge joined the Union Army’s 36th Colored Troop. He initially served as a prison guard but was promoted to Sergeant after distinguishing himself at the Battle of Richmond.

Painfully aware the standards had to be higher at Pea Island, Eldredge drilled his men with military precision. They practiced with the surfboat and Lyle Gun twice a week. He maintained a first-class crew, a meticulous logbook, and a spotless station.

Noon, October 11, 1896: Keeper Etheredge wrote in his log book “experiencing hurricane conditions.” Despite the storm, the surf men maintained a vigilant watch from the tower. At 9:00 p.m. Theodore Meekins saw a flare to the north. The crew dispatched and pulled the Lyle Gun two miles to discover the 390-ton schooner E.S. Newman had run aground off the beach.

The Lyle Gun was of no use in the driving wind and rain. Etheredge asked for two volunteers to don life vests and risk their lives in order to swim to the ship with a rope. Nine times the surf men took turns swimming out through the crashing waves to bring back all nine passengers, including the captain’s three-year-old son.

From the period 1895 to 1900, the Pea Island Lifesavers rescued passengers from six shipwrecks with a 100 percent success rate. Richard Etheredge served as the keeper at Pea Island for 20 years, until his death in 1900, at age 58 from pneumonia. The Pea Island station maintained a legacy of black surf men and remained among the best-run stations in the country until it closed in 1947.

Washington, D.C., October 11, 1996: One hundred years after the heroic rescue of the passengers from the E.S. Newman, the U.S. Coast recognized descendants of Richard Etheredge and the Pea Island Lifesavers with the Coast Guard Gold Life Saving Medal, their highest award.