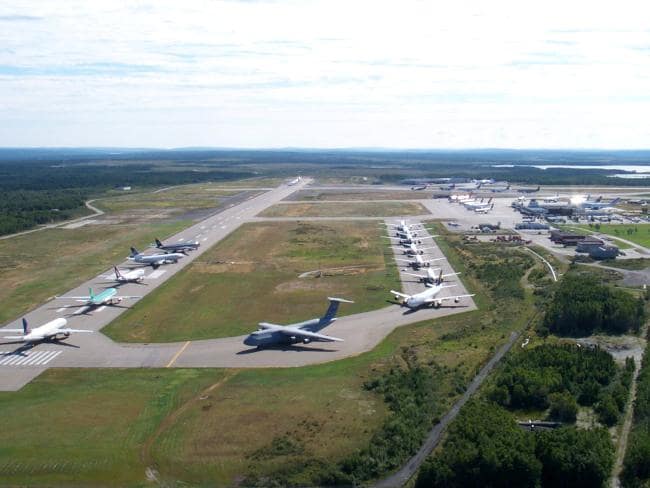 3:00 pm, Monday, September 11, 2001 – Gander, Newfoundland: Flight 49 was enroute from Paris to Dallas when captain Beverly Bass called for the head flight attendant. Bass handed her a printed message from the American Airlines office in Dallas. It read, “All airways over the Continental United States are closed to commercial air traffic. Make an emergency landing in Gander, Newfoundland.”

American flight 49 detoured 400 miles to the airport in Gander. It was the 36th commercial plane to land there that day. The confused passengers were told the plane had mechanical problems. It would be 28 hours before they would leave the plane and discover the real story.

At 11:00 am that morning Gander Mayor Claude Elliott had gotten a call for help when the first plane, Virgin Air Flight 75 with 337 passengers enroute from London to Orlando, landed at the town’s airport. Elliott notified the local Red Cross and Salvation Army then opened an emergency operation at the town hall. The town of Gander had only 10,000 residents, but its World War II era airport featured two 10,000-foot runways – the longest between Europe and North America.

By late afternoon, 38 commercial planes bound for the U.S. from Europe were on the ground in Gander. A total of 6132 passengers from 40 countries and 463 crewmembers awaited instructions. The first priority was for a local pharmacy to bring Nicorette gum and nicotine patches.

Mayor Elliott called churches, schools, fire stations, the Lions Club, and the Knights of Columbus asking for assistance and then requested the small towns within 30 miles set up emergency shelters. Gander’s 550 hotel rooms would be used for the flight crews. At 4:30 pm passengers from Virgin Air flight 75, the first plane to land, cleared customs and were met by 200 volunteers. Passengers were only allowed to bring carry-on luggage with them.

School bus drivers, who were on strike, put down their picket signs and drove passengers to shelters. At 8:30 pm the 400 passengers on Lufthansa Airlines flight 430 cleared customs and were taken to a high school where they received food, toiletries and bedding. Passengers from Continental flight 23 were bussed 15 miles to a church in the town of Appleton, population 700. A small Baptist church took 40 refugees from Moldova off Delta flight 141 who were headed to New York from Brussels.

Every business in town joined in the relief effort. The two grocery stores went to 24-hour service. Newtel, the local phone company set up phones and computers in their building so passengers could make free calls and have 24-7 access Wi-Fi. Local drug stores made calls to a dozen countries to get medical information to fill prescriptions. The nine dogs, 10 cats, and two monkeys on board the planes were taken to an emergency animal shelter in an airport hanger.

The Salvation Army was responsible for gathering supplies. People donated food, sheets, blankets, and old clothes. Pharmacies donated toiletries, including 4000 toothbrushes. More than 200 people opened their homes so the “plane people” could shower.

Finally on Friday the planes began to leave. On Sunday afternoon the final flight, Delta Flight 141, was re-routed from New York to Atlanta. The hospitality of the people in Gander and surrounding communities during Operation Yellow Ribbon had been overwhelming.

Residents refused to accept money for their efforts, but visitors left $60,000 in the town donation box. Later visitors established a million dollar trust for scholarships for local students. The president of the Rockefeller Foundation, who stayed at one of the schools, was so impressed he agreed to buy all new computers for the schools.

In September 2011, on the tenth anniversary of the 911 tragedy, many of the passengers returned to Gander, including Captain Beverly Bass and her family. While they would eventually forget some of the horrific details of that event, they would never forget the love and kindness shown to total strangers by the people of Gander.