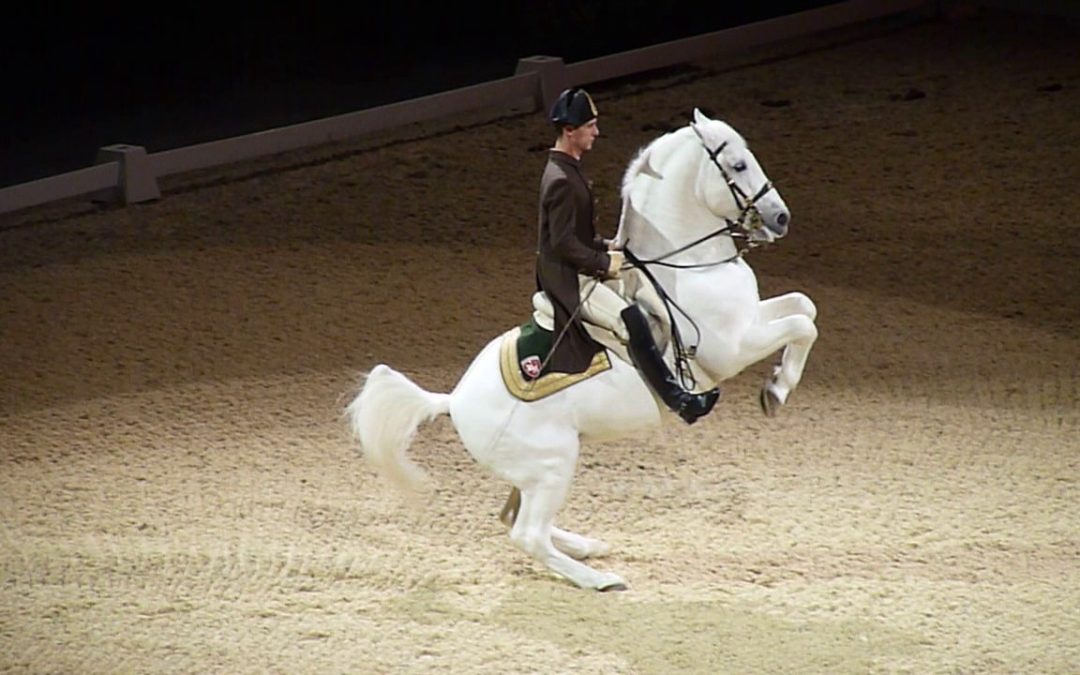 April 28, 1945 – Hostau, Czechoslovakia: Colonel Hank Reed hated to abandon the horses, but could he risk soldiers’ lives to save a herd of horses? The decision was above his pay grade. Reed knew his old Virginia polo buddy, George Patton, commander of the Third Army in Europe, was the only one bold enough and crazy enough to approve the bizarre mission. In 1909, Lieutenant Patton had been an avid horseman in the U.S. Cavalry.

Reed needed a quick decision. His Second U.S. Cavalry troops were in southern Germany on the Czechoslovakian border, just 20 miles from Hostau. However, the Russian Red Army, having captured Berlin, was only 40 miles away and advancing rapidly through Czechoslovakia from the west. Reed radioed army headquarters. Patton gave his approval, “Get them. Make it fast.” The message concluded that Reed’s neck was on the line if he incurred casualties.

The day before Reed radioed Patton, a German veterinarian from the Hostau stud farm had crossed enemy lines under a flag of truce and secretly shared a proposal with Colonel Reed. If he rescued the horses, the two German panzer divisions headquartered in the area would surrender. By chance or by providence, the Germans found the right guy. Like Patton, Hank Reed was a polo player and lover of horses. When shown pictures of the world-renowned horses stabled at Hostau, he was determined to help.

German Chancellor Adolf Hitler had planned to create a horse master breed, and his plan was to use the majestic white Lipizzaner horses in Vienna, Austria. In January 1945, when the Soviet bombing got too close, the Germans herded 375 Lipizzaner more than 200 miles and hid them in Hostau. Now the Germans feared the hungry Russians, who had already shot many German horses, would make steaks out of the herd.

The Hostau herd included the entire Lipizzaner breeding stock from Vienna’s prestigious 400-year-old Spanish Riding School. Traced initially to Spain and Arabia, the Lipizzan breed had been based in Vienna since 1572. The ancient horses performed their famous ballet in the Austrian capital.

On April 28, 1945, two U.S. cavalry reconnaissance units consisting of 325 soldiers, machine gun armored jeeps and trucks pushed their way through heavy enemy fire the 20 miles into Hostau. They found more than 1,200 horses in the stables, including 375 Lipizzans, 150 Arabians and 600 Russian thoroughbreds.

Now entrenched behind enemy lines, the U.S. soldiers guarded the world’s most valuable horses while Reed recruited several hundred allied prisoners of war (POWs) from Britain, France and New Zealand, who had been liberated along with the horses at Hostau, to help defend the stables. Twice, they fought off attacks by elite German SS troops unaware of the secret mission.

Reed quickly developed a plan to move the Lipizzaner stallions, pregnant mares and newborn colts back to Germany before the arrival of the Russians. Less than a week after reaching Hostau, U.S. soldiers and allied POWs convened “Operation Cowboy.” They loaded the mares and colts on American and German trucks, and they rode the stallions 35 miles back over the border to Kotztinz, Germany. Soviet tanks rolled into Hostau just hours after the Lippizaner procession headed west. The horse convoy had departed without a moment to lose.

After the war, the Lipizzaners were returned to the 16th century Spanish Riding School. To recognize the U.S. Army heroics, Colonel Alois Podhajsky, director of the riding school, gave the second cavalry 200 horses valued at one million dollars, including three Lipizzan stallions and six Lipizzan mares.

Today, 450 years after the founding of the Spanish Riding School and 75 years after Hank Reed and his men saved the Lipizzaner’s, the prancing white horses still perform their equestrian ballet in Vienna. To the amazement of visitors from all over the world, the Lipizzaner’s rear high on their hind legs, executing a series of forward jumps while pawing with their forelegs like a boxer.

Although far from the most dangerous mission of WWII, the daring mission saved a beautiful part of the eastern European culture. According to Hank Reed, “We just wanted to do something beautiful at the end of a cruel war.”