by peteblack4ua@gmail.com | Aug 30, 2017 | Adversity, Determination Despite the Odds, Overcoming Adversity 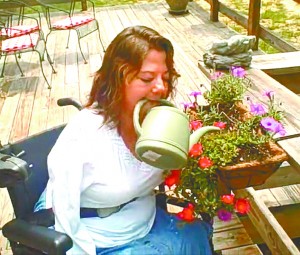 Sitting in her dorm room at Auburn University – Montgomery (AUM), Allison Wetherbee was depressed. She recalled, “My life was fertile ground for pessimism…I indulged in whining from time to time, sometimes for a week at a time.” She often bartered with God, promising to stop whining and complaining if she could just be like other people. On this particular day in 1991 her thoughts turned to her close friends; none of them were really happy. Suddenly she had an epiphany. Happiness was not dependent on circumstances; happiness was a choice. The revelation took root and it changed her life.

Wetherbee was born in Camden, Alabama, in December 1970, to Charlie and Gloria Wetherbee. Anticipating a wonderful Christmas with their new baby, her parents were shocked when their baby was born with no arms or legs, a rare condition known as quadrilateral tetra-amelia. Initially the Wetherbees struggled with the how and why of this unimaginable situation. However, because their baby rarely cried and seemed happy, they made the decision early on to proceed with life as usual.

During summers as a child, Allison attended the Alabama Special Camp for Adults and Children (ASCCA) at Lake Martin where she met other children with special needs. At age 15, she got a job in the camp public relations office and after working there three straight summers, she knew being on the camp staff was what she wanted to do with her life. She attended her high school prom, had the senior annual dedicated to her, and she graduated from Wilcox Academy in Camden to a thundering standing ovation.

In August 1989, Allison’s parents drove her to college at AUM. It was a scary, lonely experience for her. She worried about how she would get along with her live-in attendant and how other students would react to her. She wondered if she could pass the courses. Her fears were groundless and she became an inspiration to students and faculty alike. Allison made the Dean’s List each semester and graduated in May 1996 with a masters degree in Mental Health Counseling.

When applying for her first job as a mental health therapist at Riverbend Center for Mental Health in Russellville, Alabama, Allison surprised her first boss by showing up for the interview without telling him about her disability. “It was not meant to be deceptive,” said Allison, “but who I had become – I was not going to be defined by my disability.” Impressed with her confidence and positive attitude, the boss offered her the job. Later on, when a co-worker suggested that Allison consider an assisted living facility near the office, she blurted out, “Oh no, I could not do that. Those places are for people with serious disabilities.”

Allison bought a house and lived independently with the aid of an attendant who took care of her basic needs, prepared her meals, did her laundry, and drove her to work each day. She prominently displayed signs throughout her home that served as a constant reminder that life and attitude are always about choices. One stated, “NO WHINING,” in bold letters. Located above the kitchen sink was the message “It is a wonderful life,” and on the kitchen door was another sign, “There is always, always, always something to be thankful for.”

Allison worked at Riverbend for eleven years before landing her dream job as the Director of Public Relations at Camp ASCCA in 2007 where she worked for seven years. On July 21, 2016, at age 45, Allison died in her sleep from a pulmonary condition. Three days later, hundreds of people gathered at the Camden Baptist Church to celebrate her incredible life. Allison Wetherbee’s decision to find something to be thankful for in every situation and circumstance impacted and inspired all who knew her.