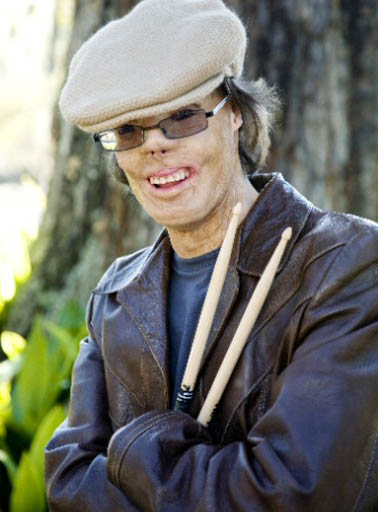 March 17, 1982 – New Orleans, Louisiana: Marilyn Caro left her 2-year-old son Dan on the porch while she mowed the grass. Focused on her task, she didn’t notice him wander into the garage. Dan turned over the lawnmower gas and when the hot water heater ignited the fumes, the garage exploded in a fireball.

Marilyn found her baby’s smoldering body lying on the garage floor. The only place he wasn’t burned was under his wet diaper. Neighbors helped get an ambulance, which rushed Marilyn and the baby to the New Orleans Charity Hospital burn unit, where her husband John joined them.

The baby had third and fourth-degree burns over 80% of his body. Doctors gave the Caros little hope that he would survive. Charity transferred the baby to the Shriners Children’s Hospital in Boston, one of the best pediatric burn units in the world. While there, the Caros learned the burns were much worse than they imagined. When the bandages were removed for the first time, they discovered their baby’s fingers, toes, lips, nose and ears had been burned off.

The young parents knelt by the bed and asked God to deliver their baby from the horrible suffering and let him die. But after several days of watching him fight to live, they began to pray for the baby to survive. John played Rocky Balboa movie soundtracks non-stop in the baby’s room, and miraculously he survived.

During the years that followed, Dan had more than 80 reconstructive surgeries. Doctors rebuilt his nose with a piece of his rib, rebuilt his cheeks with synthetic material, used skin from the back of his neck to make eyelids and built a short thumb for his left hand. Dan learned to eat and write by holding utensils and pencils between the ends of his arms. It took him until age 12 to learn to tie his shoes. Still, when he finally did, it was such a liberating experience he was ready for another challenge.

John was a jazz musician in New Orleans, the City of Jazz. Dan wanted to play a musical instrument, too. Without lips and fingers, the trumpet, saxophone, clarinet, guitar and piano were out. John bought Dan a snare drum when he was 13. Dan could hold a drumstick between his small thumb and left hand, but the other stick was a problem. Initially, Dan tried a glove, then super-gluing and taping a drumstick to his wrist, all without success. His breakthrough came when he combined a wrist sweatband with rubber bands to hold the drumstick.

Dan practiced on his drum for hours. As his skills improved, John bought him a set of snare drums. Dan became the top drummer in his Fountainbleau High School band. He played in the Southeast Louisiana University marching band for two years before transferring to Loyola University in New Orleans. He majored in music and played in the school’s jazz ensemble.

After college, Dan became one of the most accomplished drummers in a city known for its jazz. Over the years, he played with the best jazz musicians in the world. Because the Shriners hospital saved his life, Dan travels extensively as an ambassador for Shriners Children’s Hospitals.

Reflecting on the tragic accident, Dan says, “Thus began the life that I was destined to live. We can choose to play the hand we are dealt or fold altogether. I can accept that I was burned or reject it. If I reject it, I am going to have a hard time. If I accept it and embrace it as who I am, it’s going to be wonderful. My life has been a gift from God, a blessing.”

Today, 41-year-old Dan Caro inspires people worldwide with his drumming and inspirational speaking. A much sought-after speaker, he tells his story and then plays the drums with no hands. His album, No Hand Dan, is a compilation of drum solos. His book A Gift of Fire is a bestseller.