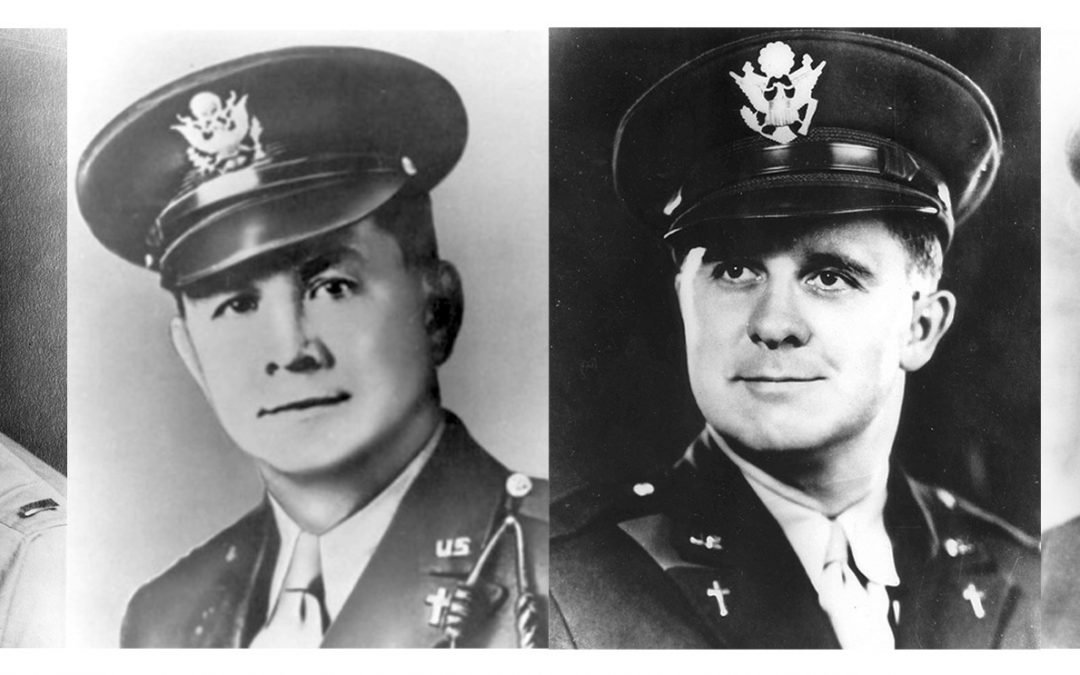 February 3, 1943 – S.S. Dorchester – North Atlantic Ocean: The German torpedo ripped through the ship’s hull on the starboard side near the engine room. The lights went out, and chaos ensued in the darkness. Nearly one-third of the 904 men on board died in the first minutes of the disaster.

Originally commissioned as a cruise ship in 1926, the SS Dorchester sailed a route from Boston to Miami before being converted into a troop transport ship in 1942. It was outfitted to carry 775 troops and a crew of 130. On January 23, accompanied by two Coast Guard cutters, the vessel left New York bound for Greenland. A week later, near St. John, Newfoundland, the ship had to pass through “torpedo junction,” a hangout for German U-boats in the North Atlantic.

Aboard the Dorchester were four Army chaplains, all of whom were 1st Lieutenants and trained at the Harvard Chaplain School. They were all influenced to become Army chaplains by the atrocity at Pearl Harbor two years earlier. All four had wanted to minister to men on the battlefield and were disappointed to be assigned to Thule Airbase in Greenland.

Born in Newark, New Jersey, John Washington was ordained to become a Catholic priest after completing seminary in 1935. After being turned down by the Navy, he entered the Army as a chaplain at age 42.

Alexander Goode, born in 1911 in Washington, D.C., followed in his father’s footsteps to become a Rabbi. He earned a theological degree from Hebrew Union College, and at age 32, was the youngest of the four chaplains. The Navy, too, had turned him down.

George Fox, a Methodist minister and the oldest at age 44, was born in Pennsylvania. He had received a Purple Heart as a young medic during WWI. He later graduated with a degree in theology from Boston University.

Clarke Poling, born in Massachusetts, was a Reformed Church of America minister whose father was a radio evangelist. The 43-year-old was educated at Yale University School of Divinity.

As the ship passed through torpedo junction on the night of the attack, soldiers were ordered to sleep in their clothes and life jackets. After the order, few slept. The chaplains made rounds at lights out to encourage soldiers.

The torpedo slammed into the Dorchester at 12:55 a.m. Because the explosion knocked out the ship’s electrical system, the emergency horns didn’t sound. Soldiers who had disobeyed orders and not worn their life jackets, now searched frantically for them in the darkness. As the ship listed severely to starboard, those who could scramble to the deck discovered many lifeboats were frozen and could not be deployed.

When 1st Lieutenant Walter Miller got to the top deck, he was frantic, “I can’t find a life jacket,” he screamed. Chaplain Fox removed his life jacket and put it on the soldier. Lieutenant John Mahoney cursed himself for not having a life jacket. Chaplain Goode stopped him from going back below. “You can have this one,” he said. In the next few minutes, Father Washington and Chaplain Poling would follow their example.

Some of those who survived would never forget the four chaplains locking arms and praying as the ship disappeared below the waves. Nor would they ever forget the courage and the sacrifice of the four men.

The two Coast Guard boats were only able to rescue 230 of the 904 onboard. In 1944, the Army awarded John Washington, Alexander Goode, George Fox and Clarke Poling the Purple Heart and Distinguished Service Cross. In 1960, Congress authorized the Chaplain Medal of Honor to commemorate the bravery of the four chaplains. The medals were presented to their next-of-kin on January 18, 1961.

“Those who you loved and were helped by you will remember you when forget-me-nots have withered. Carve your name on hearts, not on marble.”     Charles Spurgeon