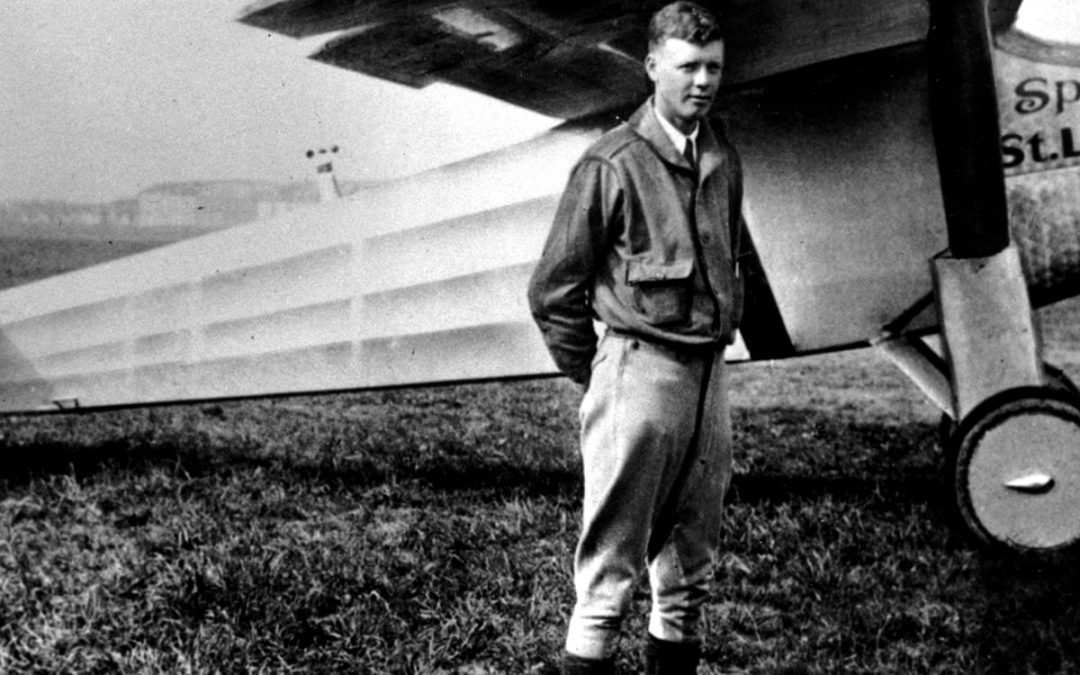 May 21, 1927 – Paris, France: Forty miles from Le Bourget Air Field, he began to see the flares. Less than 33 hours earlier, 500 people had watched the 25-year-old pilot take off from a muddy Roosevelt Field runway in New York. He hoped to become the first pilot to make a solo non-stop flight to Paris. As the airplane dropped toward the runway, he saw the throngs of people – a scene that would remain with him for a lifetime – 100,000 cheering people had surrounded the airport awaiting his arrival. Charles Lindberg had become a world hero.

Lindberg, born one year before the Wright Brothers’ historic first flight in 1903, fell in love with the idea of flying. While studying engineering at the University of Wisconsin, he dropped out of school to chase his dream. After two years of Army pilot training, he got a job flying mail from Chicago to St. Louis.

In 1919, Raymond Ortieg, a New York hotel owner, offered $25,000 to the first pilot to fly solo non-stop between New York and Paris. By 1925, several pilots had died trying, but no one had claimed Ortieg’s prize. Lindberg pledged his life savings of $2,000 and was able to convince several St. Louis businessmen to donate $15,000 for his attempt.

The four biggest airplane builders in the United States turned Lindberg down. He found a small company in San Diego, California, to specially design an airplane for his trip. To reduce the weight of the plane and accommodate more gasoline, Lindberg choose to forego the heavy pilot seat – he would sit on a light wicker chair – the radio and a parachute.

Lindberg’s chief concerns included engine reliability, running out of fuel and navigational error, but pilot fatigue was his biggest worry. Thirteen days before his flight, two World War I French aviators took off from Paris en route for New York and were never heard from again.

Lindberg used a simple altimeter to determine altitude, a compass and a stopwatch to navigate his course and he made pencil marks on the gas tanks to track fuel levels. Benefitting from good weather, he maintained a speed of 100 miles per hour and an altitude less than 500 feet and reached Newfoundland at 6:00 p.m.

At 9:00 p.m., a thunderstorm forced him to climb to 10,000 feet to fly above the storm. With ice forming on the wings, he feared the plane would become too heavy to fly. “The ice forming worried me a great deal,” recalled Lindberg, “And I debated whether I should keep going or go back. I decided I must not think any more about going back.”

At 2:00 a.m. with daylight dawning, Lindberg calculated that he was halfway to Paris. He had another 18 hours to go. Rather than excitement, he felt only dread. At 5:00 a.m., dense fog forced him to fly 10 feet above the ocean to maintain visual contact. He repeatedly nodded off, waking seconds, sometimes a minute later. Finally, after flying for hours, the fog cleared, and he spotted several small fishing boats. At 27 hours into the mission, Lindberg had made it to the coast of Ireland. He was now wide-awake.

The huge crowd stormed the barricades and pulled the weary pilot from his plane. They paraded him around the field on their shoulders before taking him to the awaiting press corp. Twenty-four years after the Wright brothers’ 59-second flight, Charles Lindberg’s daring secured his place in aviation history, and it opened the door to transcontinental flights between America and Europe.