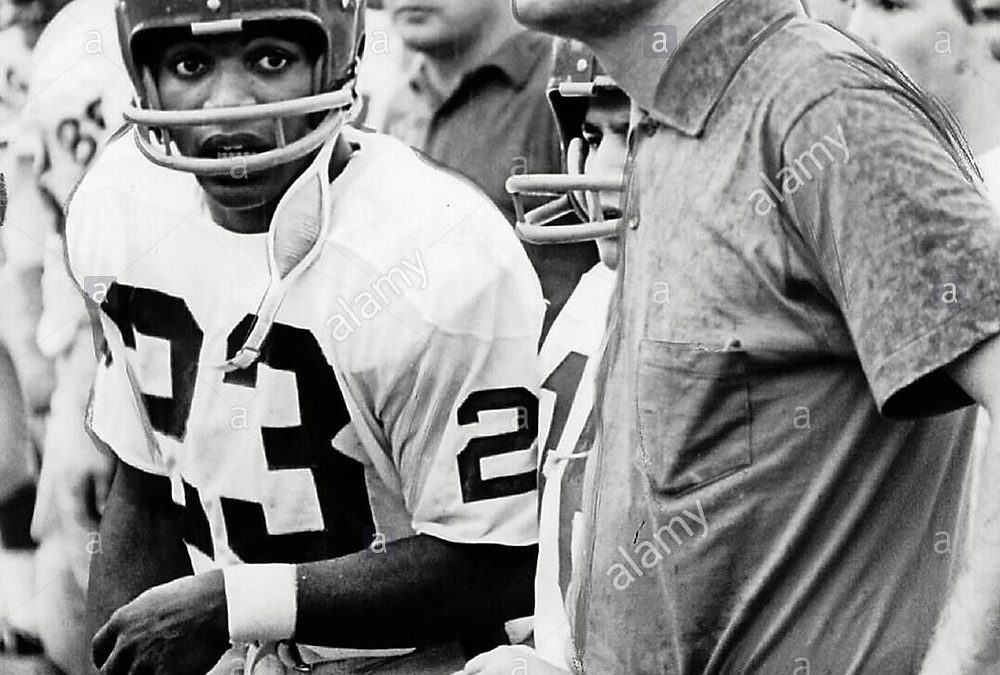 1968 – Dallas, Texas: “Talk to your grandmother?” asked SMU football coach Hayden Fry. Jerry LeVias responded, “The line was busy.” The game with TCU was 10 minutes from kickoff, but Fry had made a promise. He borrowed a quarter from a band member and the two of them placed a call on a payphone under the stands to Ella LeVias in Beaumont, Texas. As was her practice, she prayed for them.

Jerry LeVias grew up in Beaumont, Texas, in a home where education was more important than sports. Jerry’s father didn’t get an education, and he was determined that Jerry would. Although small, Jerry was an outstanding football player. When he graduated from Hebert High School in 1965, he had more than 70 football and academic scholarships. It was a year after the Civil Rights Act was signed; none of the offers were from the Deep South. Jerry decided to play football at UCLA like his older cousin Mel Pharr.

Near the end of the 1965 recruiting period, three cars pulled up in the LeVias’ driveway. Jerry’s high school coach and five white guys got out. Inquisitive neighbors stood on the front porch, assuming Jerry was in trouble with the police.

Hayden Fry had done his homework. He went next door to Jerry’s grandmother’s house while the other men went to the LeVias house. In 1962, when 36-year-old Fry took the job at SMU, he told SMU President Willis Tate he would recruit black players if he ever got the opportunity.

Coach Fry spent 30 minutes with Ella LeVias before going next door. She had two requests of Fry: allow Jerry to wear number 23, her favorite Psalm, and make Jerry call her before every game so she could pray for him. She knew he would need to be a warrior like David. Fry was the only coach who talked to Jerry and his family about the importance of education. When Jerry visited SMU, he spent his time with professors, not the coaching staff.

Jerry LeVias became the first Black player at SMU and the first in the Southwest Conference, and he walked a lonely road. Most of the players did not want him there. Nobody would room with Jerry during his four years at SMU. He showered by himself. On the first day of class, he sat in a row by himself. There was enormous verbal and physical abuse and even death threats on several occasions. Coach Fry faithfully called Jerry every night to check on him. He made Jerry’s loneliness more bearable.

At the SMU President’s request, Dr. Martin Luther King Jr. visited the campus in Dallas in March 1966 and spoke to a packed McFarlin Auditorium crowd. Afterward, Jerry had the opportunity to visit with him. Dr. King reminded Jerry of what his grandmother always told him, “Even if they cuss, hit or spit on you, always keep your emotions under control. Keep your composure even when others don’t.”

There were plenty of times Jerry thought about quitting. He called his sister in California during his first year and told her he was coming to UCLA. She reminded Jerry of what their father said. “You gave Coach Fry your word. You make your bed. You sleep in it.” Jerry had made his bed at SMU.

Jerry LeVias’ tenacity paid off. In the fall of 1966, the 5’9” wide receiver led the Mustangs to their first conference championship in 18 years. Number 23 would go on to be a three-time All-Southwest Conference choice. As a senior, he was voted All-America and Academic All-American. Jerry played six years in the National Football League before a successful career with Continental Oil as a sales executive. In 2003, Jerry was inducted into the College Football Hall of Fame.

Jerry LeVias was a pioneer for other Black football players. His success took a committed coach, a praying grandmother, and plenty of patience and determination.