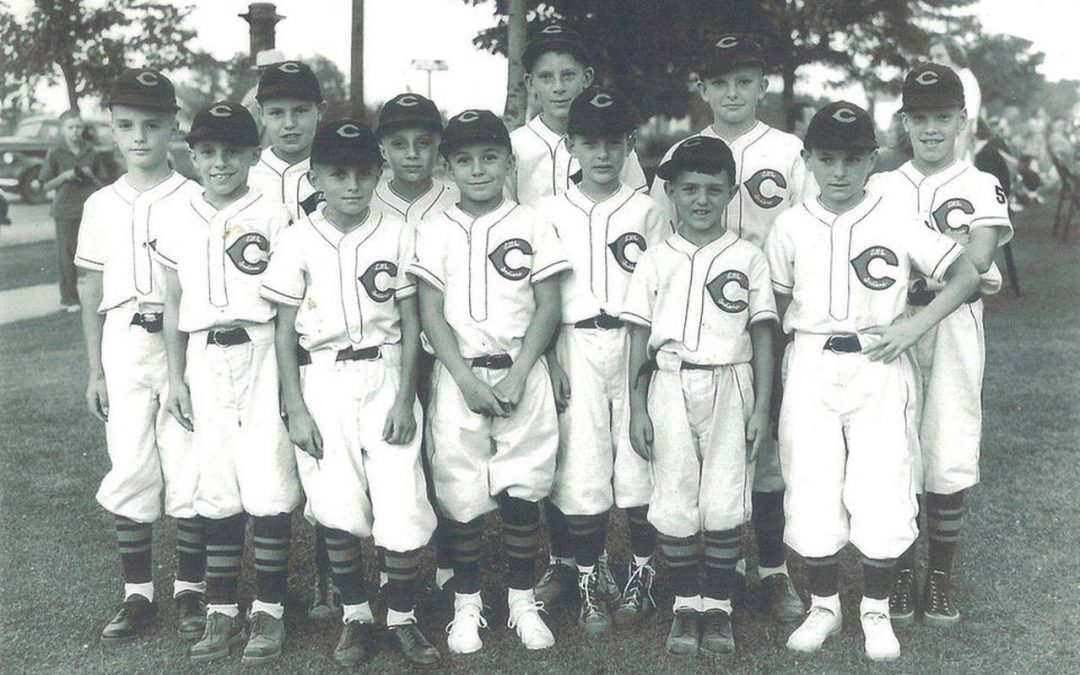 Sunday, September 28, 1941 – League Park – Cleveland, Ohio: Josephine Morhard took her seat behind the first base dugout in the venerable old ballpark. Home of the Cleveland Indians, it was the place where Babe Ruth hit his 500th home run.

On this cool afternoon, it would host the country’s first Little World Series championship between the Little Cleveland Indians and Little St. Louis Cardinals. The game would be the crowning moment for the first boy’s baseball league that Morhard had pioneered four years earlier. It had not been easy. But nothing in her life had ever been.

Morhard was the 11th of 17 children born to a French immigrant farmer in Bessemer, Pennsylvania. At 12, tired of her father’s beatings, she ran away from home and found work as a maid. She bounced from one low-paying job to another. In 1915, at age 24, she moved to Cleveland and started her own stenography business.

Twice Morhard married alcoholics who became mean and physically abusive when they drank. Her first marriage lasted seven years. The second lasted nine years and ended a few months before the 1929 stock market crash. At age 39, she was pregnant with a son, Albert, and the owner of a struggling butcher shop one mile from League Park.

By age 8, Albert was getting in trouble at school. Morhard feared he would grow up to be like his father. Working six days a week at the butcher shop left her little time for proper supervision. When Albert played baseball, he stayed out of trouble. But the neighborhood houses had no yards, so the boys played baseball in the streets with their nailed-up bats and an old balls while cars whizzed past.

In the spring of 1937, Morhard had an idea. She would create a boys baseball team for Albert and his friends. Her first stop was the mayor’s office where she asked for land for a ball field. After scolding her that women knew nothing about baseball, the mayor allowed Morhard to use two acres behind city hall and he agreed to use city bulldozers to fix the field. Although money was tight, she convinced a sporting goods store to sell her bats, balls and gloves at discounted prices.

Eight boys ages 9 to 11 joined Morhard’s first team. She called them the Little Cleveland Indians. But, there was a problem. There were no teams to play. After some checking, she found a Catholic boys team across town and they played several games in the fall of 1937. Morhard, in a dress and high heels, a baseball cap perched on top of her bun, was both coach and umpire.

By the 1939 season, Morhard’s league had eight teams who played a 30-game schedule. She got permission from Cleveland Indians owner, Alva Bradley, for the boys to wear uniforms just like the big league teams, and she persuaded Cleveland Indian players to help coach the boys. Some of their sons joined the league. In Morhard’s league, every boy played at least one inning, and there was no cussing or arguing with umpires. If a player got out of line, she blew her whistle and stopped the game.

During the 1941 season, the Cleveland newspapers carried the boy’s league box scores right below the Cleveland Indians box score. Everyone in Cleveland knew about the Little Indians, Little Yankees, Little White Sox and Little Cardinals. Hundreds of people attended the games.

On September 28, 1941, the Little World Series championship was attended by thousands and covered by most newspapers in the country. The Indians won 6-5. Morhard promised better things the following year. However, two months later, the Japanese bombed Pearl Harbor and life changed in Cleveland. The league folded in 1944.

Over the years, Morhard received many calls about how to start a boy’s baseball league. One such call came from Williamsport, Pennsylvania. Today, Williamsport is the home of the Little League World Series, but it is Josephine Morhard who established the first league. She got Albert off the street. He became an outstanding baseball player at Case Western University and a prominent trial lawyer in Cleveland. And Josephine Morhard became the mother of Little League Baseball.