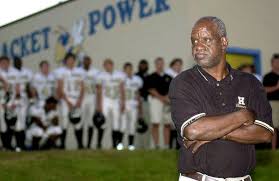 August 1964 – Anderson, South Carolina: He showed up on the hill overlooking the McCants Junior High football practice field. From a safe distance, he watched the team practice each afternoon. After a week, Coach Harold Jones invited the young man to attend practice. It wasn’t long before the 18-year-old was carrying water to players, shagging footballs and mimicking the coach’s antics.

James Robert Kennedy was born in Anderson in 1946. By age three, it was apparent that he wasn’t normal. People told his mother, Janie Mae Greenlee, to put him in an institution. She ignored them. As a cook at the hospital, she didn’t have money for testing and evaluation, anyway. By his teenage years, James wandered the streets of Anderson with his ever-present transistor radio on his shoulder. He could not read or write and could barely speak.

Nobody was sure why the gruff football coach Harold Jones took a liking to the mentally challenged young man. Jones nicknamed him ‘Radio’ for obvious reasons. Radio never missed a practice, and after two weeks the coach asked him to be the team manager. Each afternoon after practice, Radio hopped in Jones’ pickup for a ride home.

A few years later, when Jones became the coach at nearby T.L. Hanna High School, Radio went with him. Despite the initial misgivings of the school principal and some of the teachers, Radio was the coach’s shadow. He sat in on Jones’ classes, helped in the lunchroom cleaning off tables and taking out the trash before heading to football practice.

Radio awoke each morning at 6 a.m. and was always the first student to the school bus stop. Over time he was given free rein at T.L. Hanna. Everyone loved Radio. Between classes, he was the hall monitor handing out hugs and high fives. He sat in on classes and took tests with other students.

Radio’s leading the T.L. Hanna Yellow Jackets on to the football field became a tradition. His halftime antics were always a crowd-pleaser. Bending over the ball like a center, Radio hiked the ball to himself and then zigged and zagged untouched to the end zone for a touchdown to the roar of the crowd.

Radio always refused to be in the senior player picture each year. He knew what might happen. He was a perpetual junior at the school with no plans of graduating. He proclaimed proudly, “I be in ‘lebenf’ grade.”

Eventually, in addition to football, Radio became the team manager for basketball and track, too. Each year he received a varsity letter certificate in all three sports. He filed them carefully between his mattress and box springs.

Radio never met a stranger. He shared his birthday with the community. His party was always at his favorite restaurant, an Anderson Chick-fil-A. Each year Radio needed the help of Jones and his pickup truck to carry home all his birthday and Christmas presents.

Although Coach Jones retired in 1999, his relationship with Radio continued. He took care of Radio’s needs, seeing him at home and at school. Jones took Radio to the doctor each year and made sure his medical and dental bills were paid.

Radio remained a student, honorary coach, and the biggest fan at T.L. Hanna High School for more than 50 years. He died on Sunday, December 15, 2019, at the age of 73 – loved by generations of students. Several thousand people attended the wake at the high school on December 20, followed the next day by the funeral service at the Anderson Civic Center, the largest building in town.

T.L. Hanna has several distinguished alumni, including a writer, several NFL football players and Boston Red Sox Hall of Famer Jim Rice. But at the entrance to the football stadium stands a bronze statue of their most famous student, James “Radio” Kennedy. In his eulogy, Harold Jones said, “Radio reminded us what was important. He taught us all how to love.”

“Love leaves legacy. How you treat other people, not your wealth or accomplishments, is the most enduring impact you can leave on earth.    Rick Warren