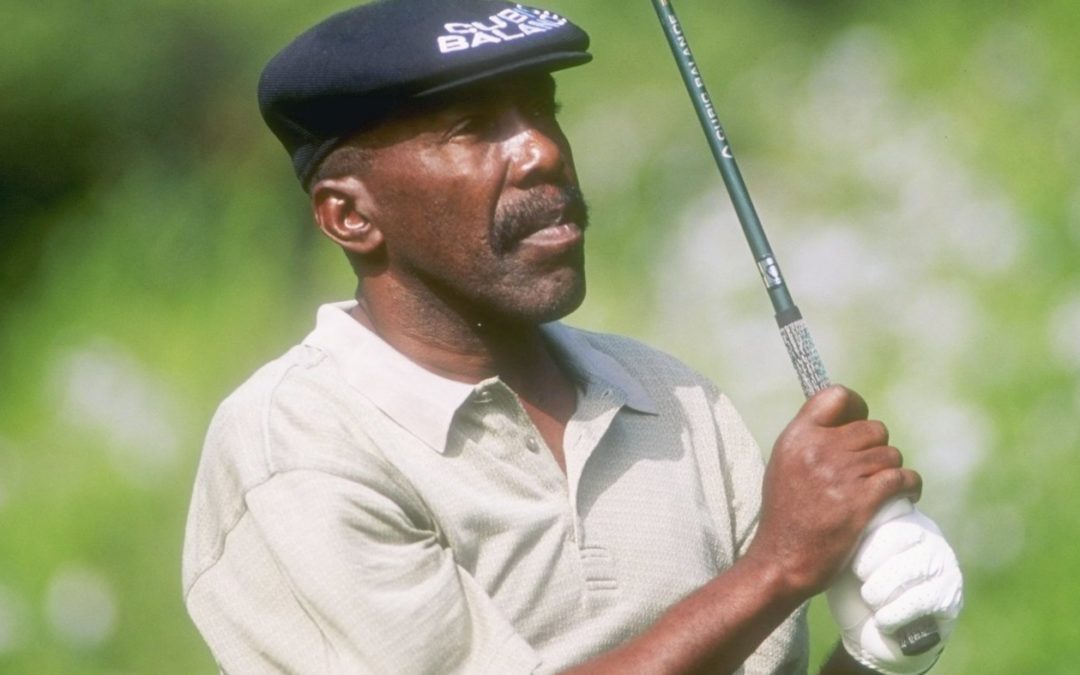 1956 – St. Louis, Missouri: Calvin Peete was in terrible pain. The 12-year-old had fallen out of a tree at his grandmother’s house and landed on his arm. The x-ray showed his left elbow was fractured in three places. The physician recommended surgery, but there was no money for that. After advising Calvin’s grandmother that the elbow could be stiff and crooked when it healed, the doctor put a cast on his arm. The doctor was right.

After his parent’s divorce, Calvin’s grandmother raised him. His father remarried a year after the accident and moved to Pahokee, Florida and Calvin went to live with him. He dropped out of school in the 8th grade and joined his father picking fruits and vegetables in the hot sun – a job he hated worse than school.

At 18, Calvin convinced his grandmother to help him buy an old Plymouth station wagon. He got a peddler’s license, stocked the car with watches, jewelry, and clothing and started selling to migrant workers in Florida. As a sideline, he made spending money by hustling in pool halls and playing poker. By the mid-1960’s, Calvin had peddled his goods up the East Coast and settled in upstate New York.

Summer 1966 – Genesee Valley Golf Club, Rochester, New York: Calvin thought he and his three buddies were going to a clambake but to his surprise, they stopped at a golf course. His friends gave him two choices – play in their foursome or sit in the car. “Who wants to chase a stupid golf ball under the hot sun,” 23-year-old Calvin asked. “It’s a silly game,” but he rented a set of clubs.

His first round of golf was comical to his friends and frustrating to Calvin – until late in the round when he birdied a hole. He fell in love with a sport he thought was only played by sissies and rich white people. When his buddies left the golf course, Calvin went to the practice range. He hit golf balls well past the blisters until it was too dark to see.

Golf captivated Calvin’s life. Within six months, his scores were in the low 80’s and after a year he was a par golfer. He never took a lesson but he read the cover off Ben Hogan’s Five Lessons of Golf and played every chance he got.

In 1968, Calvin received another surprise. On a Sunday afternoon on a television in a golf pro shop, he watched Lee Elder as he competed with Jack Nicklaus in a playoff for the American Golf Championship. He had thought African Americans were only caddies and waiters in pro golf. “It may take me six or seven years, but I will play on the PGA Tour,” Calvin told his buddies. Their laughter drew stares from across the room.

1975 – Professional Golf Association Tour: It took Calvin almost eight years, but in the spring of 1975, after three failed attempts, the 32-year-old qualified for the PGA Tour. In 1979, Calvin won his first PGA tournament, the Greater Milwaukee Open, and from 1982 to 1986, he was the winningest player on tour. At 5’10” tall and 150 pounds, he didn’t hit the ball far, but he always hit it straight.

Nicknamed “Mr. Accuracy” by his fellow golfers, for ten consecutive years (1980-90) Calvin Peete led the PGA in hitting fairways with his drives. Today he remains the most accurate golfer ever to play on the PGA Tour.

One of the cardinal rules for a great golf swing is to keep your elbows straight while swinging. Because of the injury in his youth, Calvin could not straighten his left elbow, so he learned to compensate. Ironically, it was his odd swing that resulted in his incredible accuracy.

A golf analyst once asked Calvin, who was revered for his long hours on the practice range, “Why do you work so hard on your game?” He reflected back to the hot days in the South Florida vegetable fields, then smiled and responded, “Golf ain’t work.”