by peteblack4ua@gmail.com | Jun 4, 2018 | Against the Odds, Determination Despite the Odds, Tests and Trials | 2 comments 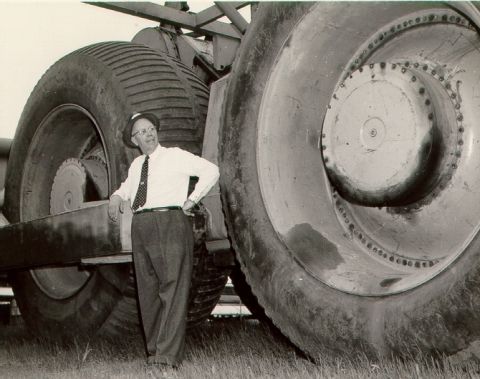 1902 – Portland, Oregon: Bobbie LeTourneau’s father told him, “OK, you’re determined to amount to nothing, so I’m going to let you quit school.” He found his 14-year-old seventh grader a job as an iron molder apprentice at the East Portland Iron Works hoping that after a couple of days of the hot, backbreaking work, Bobbie would return to school; but Bobbie loved the work.

Three years later when the ironworks burned, Bobbie found a job in a San Francisco foundry and became a journeyman iron molder. During the next 12 years, he got saved, got married, lost a child, was fired several times, and had a string of jobs – logger, construction worker, brick mason, auto mechanic – to name a few. He started out with nothing and by his late 30’s he still had most of it.

In the fall of 1920 Bobbie discovered his destiny. Ironically it happened when his auto repair shop failed and his brother hired him to level 40 acres of land. When Bobbie drove a tractor for the first time, he fell in love with moving dirt. He borrowed $500 to buy a used Holt tractor, rented a scraper blade, and went to work in the dirt moving business.

September 19, 1921 – Stockton, California: Bobbie founded the R.G. LeTourneau Company and became known by those initials. He built a major highway between Stockton and Oakland, California and later connected the Boulder Highway to the Hoover Dam. Over the years the company stopped contracting and focused on building earth-moving equipment with factories in California, Illinois, Georgia, Mississippi, and Louisiana.

On June 6, 1944, when the Allied troops stormed the beaches of Normandy, France, in the largest invasion in world history, they did so with the help of machines and equipment built by the R.G. LeTourneau Company. Letourneau’s machines represented 70% of the earth-moving equipment and engineering vehicles used in World War II.

Nobody ever told LeTourneau that a machine could not be built to handle a big job. His motto was “no big problems, just little machines” and he delighted in engineering and designing bigger and better machines. Letourneau received almost 300 patents during his lifetime.

He built the first bulldozer, the first mobile scraper pans, the first log hauling machines, and the first offshore oil rig in the Gulf of Mexico. At age 70, LeTourneau built a rubber-tired dirt hauler that could move 150 tons of dirt – 1000 times more than his first rental scraper.

LeTourneau based his company on Christian principals. He began by tithing ten percent to his church and never required his employees to work on Sunday. God blessed the business. As the company grew so did Letourneau’s giving. LeTourneau and his wife established the Letourneau Foundation and directed an increasing amount of the business profits there until 90% of the profits went into the foundation, and he and his family lived on 10%.

The LeTourneau Foundation donated hundreds of millions of dollars to charities and projects around the world, including funds to build hospitals, churches, and schools in Africa, South America, and Haiti. The Foundation also established Letourneau University, an interdenominational liberal arts university in Longview, Texas. Today the university has 3,000 students from all 50 states and 30 different countries.

Before his death in 1969 at age 81, R.G. LeTourneau frequently shared his story of how God richly blessed an auto mechanic with a sixth-grade education. His talks usually began with  “I am just a mechanic, who has been blessed by God. I shovel it out, and God shovels it back, but He has a bigger shovel.”