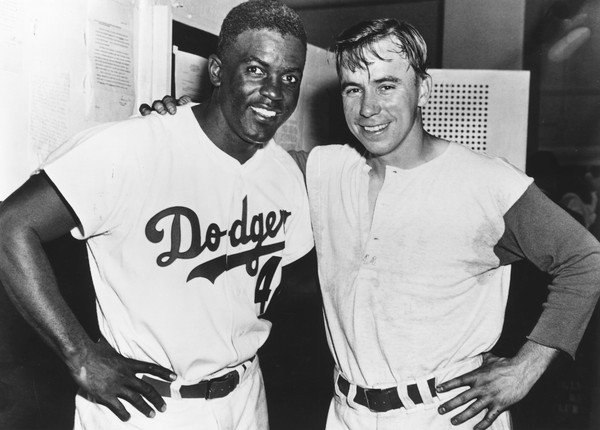 July 1918: Harry Peter Henry “Pee Wee” Reese was born in Ekron, Kentucky. He was so small that he did not start on his high school baseball team. In 1938 he was playing in a church league where the local minor league baseball team, the Louisville Colonels, discovered him and offered him $200 to sign a contract.

Two years later Reese made the major leagues at shortstop for the Brooklyn Dodgers. In 1942 he played in his first all-star game and went on to make the all-star team for ten straight years. In 1984 he was selected into the Baseball Hall of Fame.

January 1919: Jack Roosevelt Robinson was born in Cairo, Georgia, to a family of sharecroppers. His father left home when he was six months old and then his mother moved the family to Pasadena, California, to be near relatives. An all-around athlete, he became the first student at UCLA to win varsity letters in four sports: baseball, football, basketball, and track.

In 1945 white professional sports were not available to black athletes. So, after being discharged from the Army, Robinson signed to play for the Kansas City Monarchs in the Negro Baseball League. After his first season, Robinson was shocked to get a phone call from Branch Rickey, the Brooklyn Dodgers manager, with a contract offer.

Rickey, who believed the time had come to integrate baseball, said to him, “Jackie, there’s virtually nobody on our side. No owner, no umpires, very few newspapermen. I’m afraid that many fans may be hostile. We’ll be in a tough position, but we can do this.”

April 15, 1947 – Washington Park, Brooklyn, New York: On the opening day of the Major League Baseball season, Robinson made his debut at first base for the Brooklyn Dodgers, making him the first black man to ever play in a big league game. It had been tough. In spring training, several teammates had quit rather than play with him. He took the field to the sound of boos and racial catcalls from the hometown crowd. Off the field, Robinson and his wife Rachel received death threats.

May 13, 1947 – Crosley Field, Cincinnati, Ohio: The second road trip of the season found the Dodgers visiting the Cincinnati Reds. Early in the game, Robinson had made two errors and the opposing fans were booing and taunting him unmercifully when Pee Wee Reese, the Dodgers team captain and all-star shortstop, called timeout.

After glaring for a long moment at the fans, he walked over to Robinson at first base, stood beside him and put his arm around him. The ballpark grew eerily quiet. Reese shook the young player’s hand and slowly walked back to shortstop. For the rest of the game, fans cheered each time that Robinson came to the plate.

Robinson played in 154 games that first season and thought about giving up after most of them. But he realized the stage was bigger than he was, so he refused to quit. At the end of that first season, Robinson won the Sporting News Rookie of the Year award in the National League. Two years later, he earned the league’s Most Valuable Player award. Robinson led the Dodgers to six World Series appearances before retiring in 1956. In 1962, he was voted into the Major League Baseball Hall of Fame.

Jackie Robinson never forgot that moment in April 1947. “Pee Wee Reese made me feel like I belonged in the big leagues,” he later recalled, “That one moment may have saved my career.” In 1997, to celebrate the 50th anniversary of Robinson’s first season, every team in Major League Baseball permanently retired his number 42. He is the only major league player to have ever earned this distinction.

“I was just trying to make the world a little bit better. That’s what you are supposed to do with your life, isn’t it?”        Pee Wee Reese