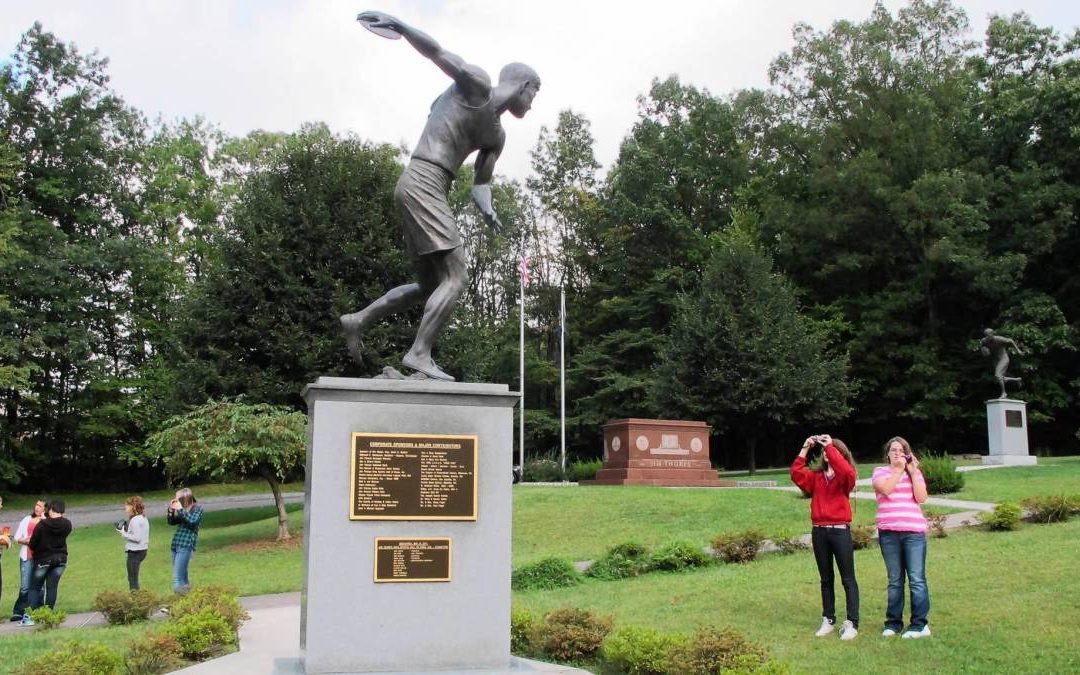 July 15, 1912 – Summer Olympics – Stockholm, Sweden: Someone stole 24-year-old Jim Thorpe’s track shoes after he had completed three of the 10 decathlon events. A frantic search followed without success. U.S. Olympic track coach, Glen Warner, happened to find a mismatched pair in the trash and with only two hours left before the high jump event, they would have to do. America’s decathlon star was not upset about the missing shoes. A veteran of adversity school, Thorpe stuffed a sock in the toe of the bigger shoe to make it fit and prepared to compete.

Born in 1887, Jim Thorpe was raised in the Native American territory of Oklahoma. His twin brother died when they were 9 years old and both his parents died a few years later. Thorpe was placed in an orphanage at age 12. Because he was half Native American, he experienced a lifetime of prejudices that came with the label “Indian.”

In 1904, Thorpe moved to the Carlisle Indian Industrial School in Carlisle, Pennsylvania, the best government-run boarding school for Native Americans. Although the school only accommodated 1,000 students from age 6 to college age, their college athletic program competed in the Ivy League with Harvard, Yale and Princeton.

Thorpe’s athletic career began at age 20, his third year at Carlisle, when he wandered by the track team’s high jump pit and asked if he could try it. In his stiff overalls, he easily sailed over the 5’9” bar. The next day Carlisle track coach Glen Warner summoned Thorpe to his office. “Have I done anything wrong?” Thorpe asked. “Son, you’ve just broken the school record in the high jump, that’s all.” At Carlisle, Thorpe became a multi-sport athlete starring in track, football, baseball, lacrosse and basketball.

Primarily because of his young athletic phenom, Warner was chosen to coach the 1912 U.S. Olympic team. In Stockholm, the week before the decathlon competition, Thorpe easily won the gold medal in the pentathlon, which included swimming, horse jumping and a three-kilometer cross country run.

On July 15, wearing his special mismatched shoes, Thorpe won the high jump. Later that day he won the 110-meter hurdles and placed third in the pole vault and javelin, before crushing the field in the final event, the 1500-meter run. He established a world record time that stood for 24 years on his way to his second goal medal.

After the Olympics, Thorpe returned for his final year at Carlisle to lead the football team to a 12-1-1 record. He made the college All-American team by rushing for 1,900 yards while leading Carlisle to the Ivy League championship.

In 1913, upon discovering that Thorpe had played semi-pro baseball in North Carolina for $2 a game the summer before the Olympics, the International Olympic Committee revoked his amateur status and stripped him of his medals. Thorpe chose not to appeal the decision. “I won them, I know I won them,” he shrugged, “I played with the heart of an amateur.”

The Native American Olympic legend died of a heart attack in 1953 at age 65. He is in the professional football, college football, U.S. Olympic and U.S. Track and Field hall of fame. The International Society of Olympic Historians voted Thorpe the greatest athlete in history. In 1982, 70 years after his unprecedented Olympic performance, Jim Thorpe’s two gold medals were reinstated and awarded to his children.

Today, in Jim Thorpe, Pennsylvania, a town named after him, stands a bronze statue of the Olympic legend in his mismatched shoes. Inscribed at the base are the words of Swedish King Gustav V, who while presenting the decathlon gold medal remarked, “You, sir, are the greatest athlete of all time.”

“Adversity causes some men to break, others to break records.”      William Ward