by peteblack4ua@gmail.com | Jan 31, 2018 | Hanging on to Hope, Limitless Possibilities, Persistence 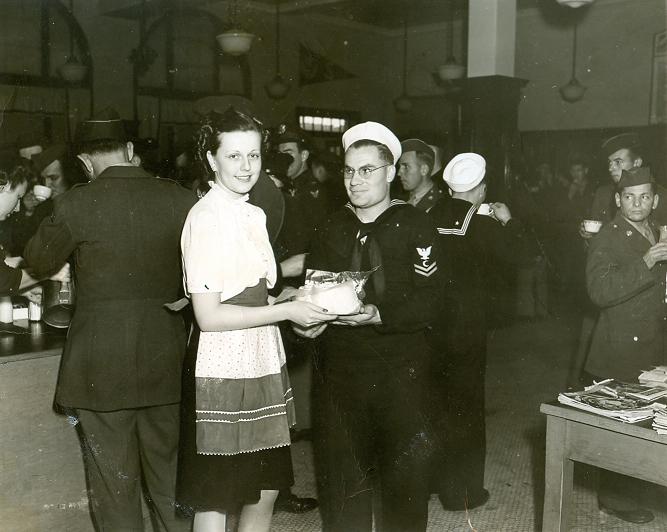 The week following the U.S. declaration of war on Japan on December 8, 1941, Rae Wilson, a twenty-six year old store clerk, wrote a letter to the weekly newspaper in North Platte, Nebraska asking if the local Union Pacific train depot could be converted into a canteen.

Wilson had an idea that volunteers from the community could meet soldiers passing through North Platte on Union Pacific trains and offer them refreshments and thank them for their service. She had a brother in the Nebraska National Guard and volunteered her services to coordinate the project for no charge. To her delight, Union Pacific and North Platte leaders agreed with her idea.

In late 1941, North Platte was a small, isolated town of 12,000 people in central Nebraska. It was located on the Union Pacific Railroad mainline. Passenger trains moving coast-to-coast stopped just long enough at the depot for steam-driven locomotives to take on coal for their furnaces and water for their boilers. A typical stop was ten to fifteen minutes.

Rae Wilson’s project actually started with a mistake. She spread the word around North Platte that her brother’s Nebraska National guard unit would be rolling through on their way to the war. She was shocked when a crowd of several hundred people showed up to meet the train. On the train was Kansas National Guard Company D, not her brother’s Nebraska Guard Unit, but because of the tremendous turnout the project was born.

The canteen began in earnest on Christmas night 1941, when five volunteers met the 11:00 pm train. Soon a regular schedule of volunteers was standing outside train windows with baskets of food, cigarettes, candy and big smiles on their faces. Soldiers were surprised by the reception they received and amazed to find out the refreshments were free.

In a few weeks the depot had been transformed into a canteen. Military protocol required soldiers to remain on the train at stops, but as word spread about the North Platte reception, military regulations were relaxed. When the train stopped, many soldiers literally ran to the canteen. There they discovered friendly volunteers and a smorgasbord of food.

The food varied depending on who the volunteers were on that particular day. A common spread consisted of fried chicken, egg or tuna salad sandwiches, fresh fruit, cookies, cakes, milk, and hot coffee. Volunteers brought their newspapers and magazines to share with the troops. During a time of national rationing of food, the people of North Platte sometimes did without so the soldiers could have refreshments.

Because these were troop trains, arrival times of the trains were initially kept secret, but volunteers discreetly worked out a notification system with Union Pacific Railroad officials. The message, “The coffee pot is on,” informed the canteen that a train was headed their way. The troop trains rolled through North Platte day and night between 5:00 am and 11:00 pm. During the peak times twenty to twenty five trains a day stopped at the depot. The bigger trains commonly carried 3,000 to 5,000, and occasionally as many 8,000 soldiers.

The number of troops passing through North Platte was more than the local volunteers could handle, but word quickly spread to other communities. Church groups and civic organizations began showing up to volunteer. A ladies organization from Shelton, Nebraska, a small community 120 miles away with a population of 800, rode the train to North Platte one day each week bringing food and hospitality. Angel food cakes and cookies showed up from hundreds of miles away.

In all, 125 communities in Nebraska and eastern Colorado participated in the project. Men, women, and children met the trains, but because many of the men were called to military duty, the volunteers were mostly women. Many of the women had sons fighting in Europe and the South Pacific. Although they could not help their sons, they could treat the soldiers as their sons.

Many of the soldiers were teenagers who were away from home for the first time. They were lonesome and scared, wondering if they would ever see home again. The few short minutes in North Platte reminded the soldiers of being back home. It also reminded them that what they were doing mattered and that they were appreciated. Sixty years after World War II ended the North Platte mayor was still receiving thank you notes from old soldiers who never forgot their experience there.

When the canteen started, the North Platte volunteers had no idea how long World War II would last or how long the project would go on. The war ended Wednesday, August 15, 1945, but the canteen stayed open another eight months until most of the troops were home. It closed on April 1, 1946.

From Christmas night in 1941 until the spring of 1946, volunteers never once missed greeting a train, day or night. Rae Wilson’s idea and the support of thousands of volunteers touched the lives of over six million soldiers who stopped at the North Platte depot-turned canteen during World War II.