by peteblack4ua@gmail.com | Feb 8, 2018 | Against the Odds, Courage Under Fire, Hanging on to Hope 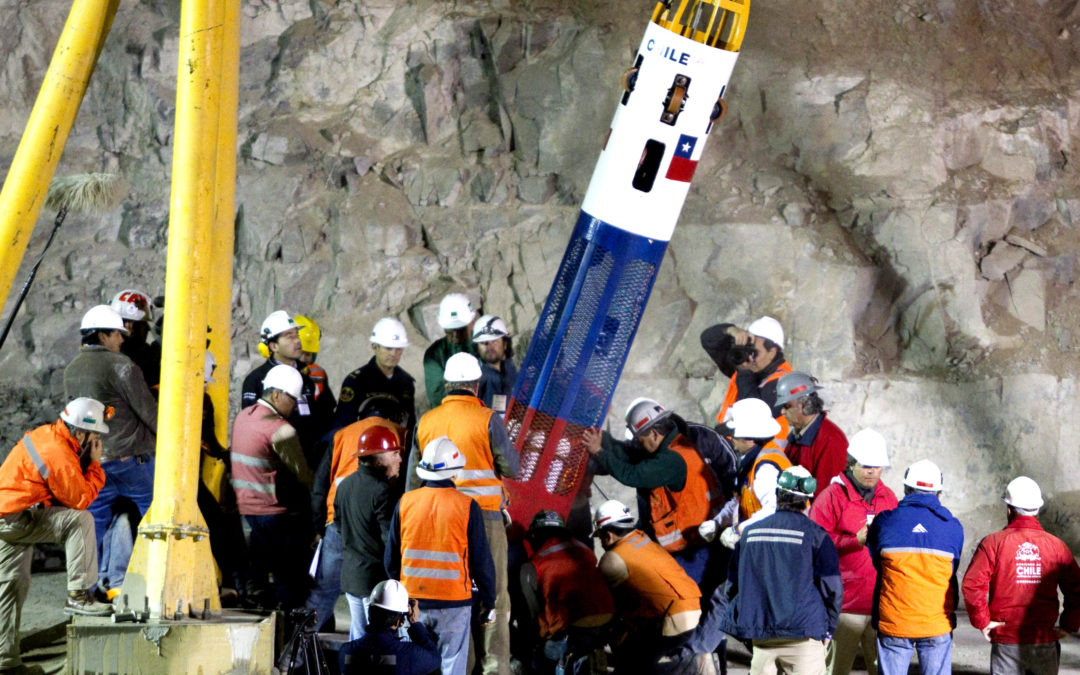 The 120 year old San Jose gold and copper mine twenty eight miles north of Copiapo, Chile, had been grumbling and groaning for several months, an audible warning of impending danger. Although management assured them everything was safe, the miners feared the mine’s infrastructure had been weakened by over a century of mining. At 2:00 PM on Thursday, August 5, 2010, their fears became reality when hundreds of tons of rock collapsed, effectively sealing the mine shaft, and trapping thirty three miners about one-half mile beneath the earth’s surface.

A few hours after the dust settled, all thirty-three miners had made it to a 16 x 40 foot safe zone at the 2300-foot level and amazingly none were injured. The collapse destroyed the electrical, ventilation, water, and communication systems, leaving the miners with only a small amount of food and water, a rudimentary lighting arrangement, and no communication with the outside world. As they assessed the situation, one miner voiced what every miner was secretly thinking, “We’re screwed.”

Jose Henriquez, a veteran miner with over thirty years of mining experience, was the one exception. He was working as the shift’s equipment operator and labor supervisor and had only worked at the San Jose mine for seven months. Despite his short tenure, his knowledge of mining and strong Christian values had gained him the respect of his co-workers.

Several days earlier Henriquez’s grandmother had shared with him a premonition that something bad was about to happen but that everything would be ok. Late in the afternoon of August 5th as fear was settling in, the miners asked Henriquez to be their spiritual leader and asked him to pray. They knew that God was their only hope.

Henriquez set up daily prayer meetings at noon and six PM. He prayed for unity among the thirty-three men and for God’s will to be done. With faith strengthened by his grandmother’s words, he prayed for the impossible. Trapped beneath a half-mile of rock, as the men joined Henriquez in praying and singing praises to God, confidence grew that they would be rescued. They felt God’s presence there to such an extent that the 33 miners began to refer to God as Miner No. 34.With communication lines severed, the miners had no clue as to how hopeless their situation appeared from the surface.

Rescue workers felt chances were slim that any of the men had survived the cave-in. It was determined a single block of rock, estimated to weigh 800,000 tons, had broken off and fallen down through the layers of the mine causing a chain reaction. Within hours of the mining disaster, the story went global. Chilean media coverage put the chance that anyone had survived at less than 2%.

Armed with knowledge that any survivors would be at the 2,300-foot level safe zone, rescuers attempted to drill a small hole to the chamber. Hitting a classroom-size pocket from a half-mile away proved to be no easy task. It took eight agonizing tries, but on day 17 the drill bit broke through the chamber roof. When a plastic bag containing a note with the message, “We are well in the refuge, the 33,” was found attached to the drill bit, shouts of jubilation erupted from 2,000 friends and family members gathered at the surface. For two and one-half weeks, they had waited and prayed at the makeshift Camp Hope located near the mine’s entrance.

A larger hole was drilled to provide food, water, and medical supplies to the trapped miners. When officials brought in a psychologist to provide counseling via phone, they were informed counseling wasn’t necessary – Miner No. 34 was on the job. The next challenge was to drill a 28-inch diameter hole, large enough to pass a capsule through to extract the miners, without creating further instability in the fragile rock column. The world watched and waited as a NASA team designed and built the rescue capsule and mine rescue and drilling experts around the world joined in the rescue effort.

On October 13, 2005, seven weeks after the miners were discovered alive, and sixty-nine days after the collapse, over one billion people watched live television coverage as 33 miners were brought one-at-a-time to the surface. As they emerged from the hole, all were wearing “Thank you, Lord” tee shirts, which had been supplied by a church. A seemingly hopeless mine tragedy that buried thirty three men a half-mile underground for more than two months became a global story of faith, courage, teamwork, and perseverance against overwhelming odds.

“Dear Lord, never let me be afraid to pray for the impossible.”      Dorothy Shellenberger