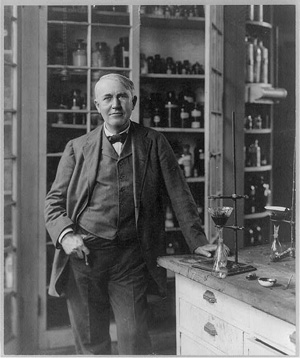 5:15 p.m. December 9, 1914 – West Orange, New Jersey: The fire started in building 41 on the Edison complex, which housed the chemicals for making film. By 6:30 p.m. it had spread to six adjacent buildings and an hour later 13 buildings were engulfed in flames. The 72-man plant fire brigade and three fire engines from Orange Park initially responded to the blaze.

In the ensuing chaos, 24-year-old Charles Edison ran into the plant complex searching for his father, Thomas. He found him safe and on his way out of the facility. Concerned his father would be devastated to see his life’s work go up in flames, Charles asked him if he was OK. Instead of being angry or discouraged, Edison yelled to Charles, “Go get your mother. Tell her to get her friends. They’ll never see another fire like this one!”

In November 1887, inventor Thomas Edison had opened his new five-building laboratory complex one mile from his house in West Orange, New Jersey. He needed a facility, not only for his team of scientists, physicists, and mathematicians, but to manufacture his inventions – phonograph, electric lights, movie cameras, microphones, alkaline batteries, and many others.

By 1914, the Thomas A. Edison Corporation had grown into a vast industrial complex with 7,000 employees. By this time Edison was doing less inventing and more manufacturing of products from his inventions. The facility contained chemistry and physics labs, a power plant, production facilities, warehouses full of parts, and a large research library.

On the night of the fire, 67-year-old Edison stayed at the plant all night. Eight fire departments were on the scene trying to contain the blaze. Early the next morning with the fire barely under control, Edison called his key supervisors and employees together and announced, “There’s just one thing to do – jump right in and rebuild. We’re rebuilding, starting today. None of the 7,000 employees will lose their job.” Edison instructed a foreman to lease all the machine shops in the area; another to rent wrecking cranes from the Erie Railroad Company, and another to hire construction crews.

More than half the buildings at the Edison facility were destroyed. The cost of the fire was almost $1 million ($23 million today). Insurance only covered one-third of the loss. Edison’s good friend Henry Ford of Ford Motor Company loaned him $750,000 to rebuild. Three weeks later, Edison had some of the plant running again.

After watching firemen struggle in the dark to fight the fire, Edison had gotten an idea. He designed a portable searchlight with three million candlepower that could be seen for several miles. Six months after the fire he demonstrated it for sale.

The year following the fire, many employees worked double shifts, and the Edison Company made a record $10 million in revenue. By the end of World War I in 1918, more than 10,000 people worked at the West Orange facility.

In September 1930, a frail and feeble Edison was at the engine throttle of the first electric-powered train on the Lackawanna Railroad in Hoboken, New Jersey – another project he had long championed. A year later, in October 1931, while conducting experiments on an alternative for rubber in Ford’s car tires, 84-year-old Thomas Edison died in West Orange. Corporations and communities around the world briefly turned off their lights in honor of America’s greatest inventor and his greatest invention.

In 2010, Life magazine honored Edison, a man with no formal education, as “Man of the Millennium” – the man with the most impact on the human race in the past 1,000 years. He had an astounding 1,093 inventions, more patents than anyone in history, having been granted at least one patent each year for 65 consecutive years.

“He never knew when he was whipped, and so he never was.”    Louis L’Amour