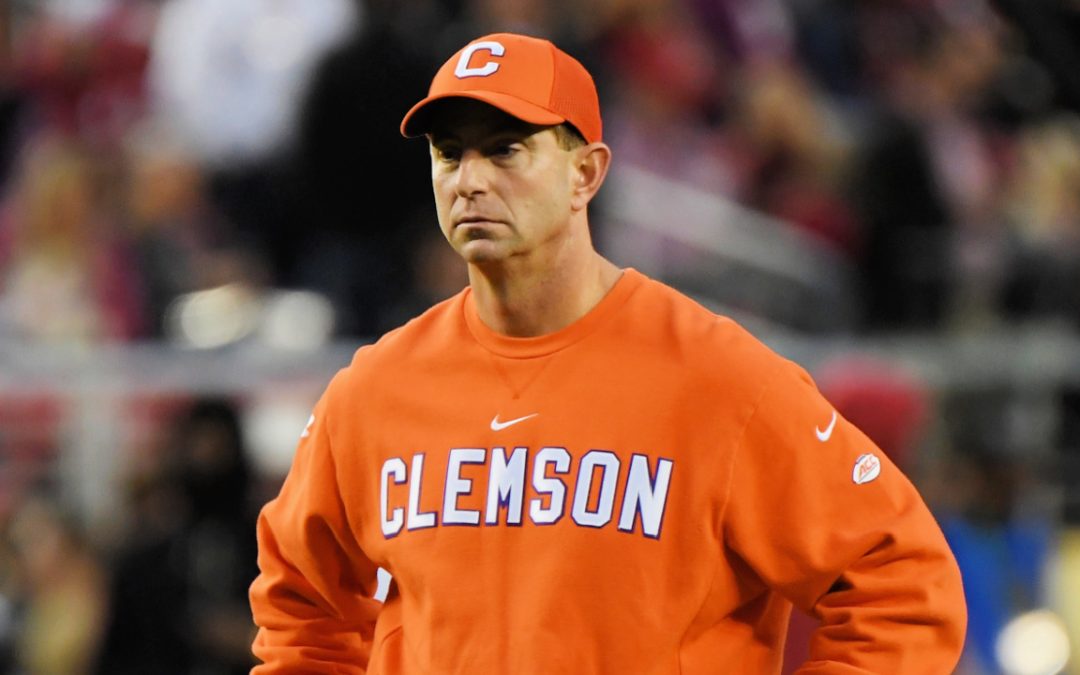 1975 – Pelham, Alabama: Young Dabo witnessed things no child should see. Ervil Swinney, his alcoholic father, didn’t always come home at night, and on the nights he did, he often fought with his wife, Carol. Several times the police were called to their home. When Dabo was in the 7th grade, Ervil lost the family appliance repair business and their house on Ashcroft Road.

Ervil and Carol divorced when Dabo was a junior in high school. Carol rented an apartment but couldn’t pay the rent, and they were evicted three months later. During his senior year, Dabo and Carol were homeless. They moved in with the family of a high school classmate. Dabo slept on the living room floor while Carol shared a bed with the friend’s mom. Despite his troubled home life, Dabo was an honor student and a three-sport athlete at Pelham High School.

Dabo got his love of Alabama football from Ervil and got his grit and tenacity from Carol. At 2 years old, she had been stricken with polio and spent 11 years in the Birmingham Crippled Children’s Hospital. She wore a body cast to correct severe scoliosis and eventually learned to walk at age 13.

With the help of federal student aid and loans, Dabo attended the University of Alabama. At 6 feet tall and 165 pounds, it took some convincing of the coaching staff, but Dabo fulfilled a dream in 1989 by walking on as a wide receiver on the Crimson Tide’s football team. Of the 45 walk-on players, Dabo was one of only two who received a scholarship.

When Dabo moved to Tuscaloosa, Carol couldn’t afford housing for him plus her apartment in Birmingham so Dabo invited her to live with him and his roommate at their Fountaine Bleau apartment. Her fried chicken, chili and chocolate chip cookies were teammate favorites. Each morning, Carol woke at 5 a.m. and drove 50 miles to her $8 an hour job at a Birmingham department store. In addition to his college classes and football responsibilities, Dabo worked weekends cleaning gutters and doing odd jobs.

Dabo and Carol roomed together in Tuscaloosa for three years. Dabo made the starting rotation at wide receiver and played on three Alabama football teams, including Coach Gene Stallings’1992 National Championship team, which beat Miami 34-13 in the Sugar Bowl. Dabo made the All-SEC Academic team twice and earned a bachelor’s degree in business administration.

After graduating, Dabo served as a graduate assistant on the Alabama coaching staff while earning a master’s in business administration. In 1995, while Dabo was interviewing for jobs in the business world, Coach Stallings surprised him with an offer to coach receivers. Dabo remained on the staff until 2001 when Coach Mike Dubose and the entire staff were fired.

After getting fired, Dabo took a two-year hiatus from coaching and sold real estate in Birmingham. In 2003, Clemson University football coach, Tommy Bowden, offered him a job to coach receivers at Clemson. Realizing that his heart was in coaching, Dabo took a pay cut and accepted the job. Bowden later promoted him to recruiting coordinator.

During a difficult 2008 season, Tommy Bowden resigned after six games. To the surprise of the football world, Dabo was promoted to interim head coach. He turned the season around, took the team to a bowl game and was named the team’s permanent head coach in December of that year.

In 2021, Dabo Swinney begins his 14th season at the helm for the Clemson Tigers. His teams have won seven conference championships, made six straight college football playoff appearances, won two National Championships and he has been honored with a National Coach of the Year award.

Today, Dabo refers to Carol as “the mama of the millennium.” She has remarried, lives in Birmingham and never misses a Clemson game. Carol has her own bedroom at Dabo’s house in Clemson. Her favorite quote from her favorite coach: “Sometimes when life isn’t perfect, it’s BYOG time. You gotta ‘bring your own guts.’ ” She and Dabo know a little about that.

“Listen, I come from the most-screwed up dysfunctional situation. Violence, police at your house, your dad’s gone and nowhere to live. I want people to know, if I can make it, anybody can make it.”           Dabo Swinney