by peteblack4ua@gmail.com | Nov 1, 2022 | Against the Odds, Determination Despite the Odds, Never Give Up | 1 comment 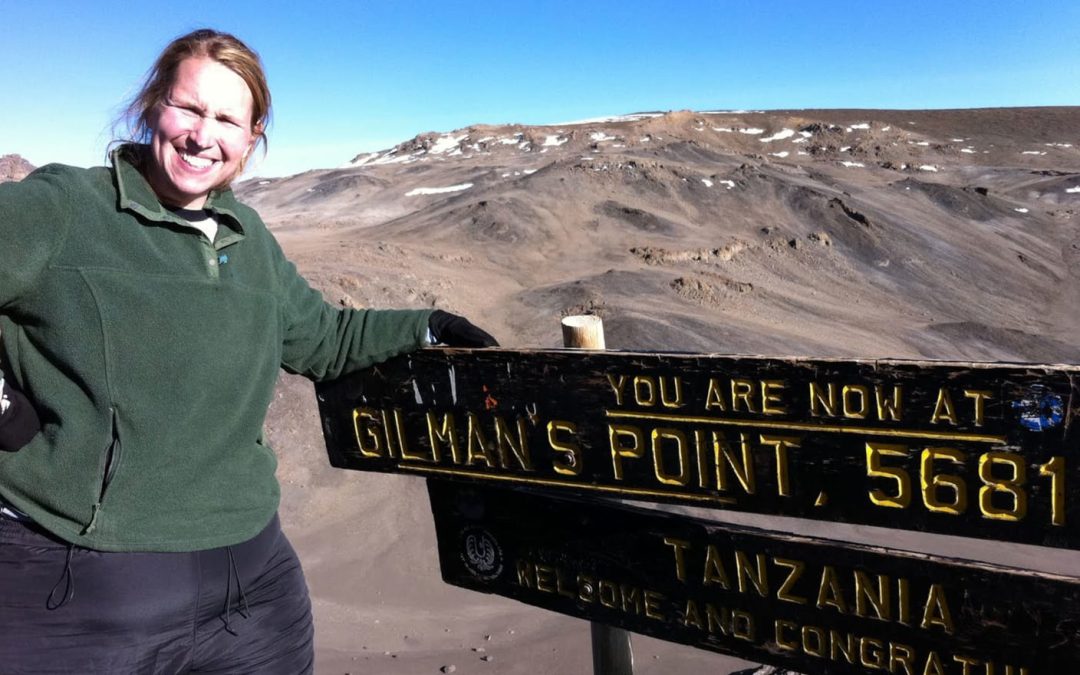 “It is not the mountain we conquer, but ourselves.”         Sir Edmund Hillary

December 2011, Mt. Kilimanjaro Base Camp, Nalemoru, Tanzania: The porters and guides gawked and giggled. They called her Mama Kubwa, Swahili for ‘big woman.’ At 300 pounds, Kara Whitely was the biggest woman they had ever seen attempt to climb the mountain.

Each year an average of 26,000 people climb 19,343-foot Mt. Kilimanjaro, Africa’s tallest peak. It requires 5 days of trail walking, almost 50 miles, to get to the summit and only 66% make it to the top. The porters quietly made bets among themselves that Mama Kubwa would not be one of them.

Whitely’s struggle with her weight began at age nine. After her parents divorced, she numbed her pain with trips to the pantry and refrigerator. Classmates joked about her weight. There were invitations to her high school. At her high school graduation Whitely weighed 200 pounds and she added another 100 pounds to her six-foot frame by the time she received her college diploma.

To celebrate losing 120 pounds, in 2004 Whitely and her new husband successfully summited Mt. Kilimanjaro. On her 2nd attempt five years later, Whitely quit with less than two miles to go. Disappointed, defeated, and unprepared, she told her family that she had a stomach virus, but they knew it was the 100 pounds she had regained.

In 2011, Whitely, a newspaper reporter, had the chance to go back to Kilimanjaro with a group from the Global Alliance for Africa’s AIDS program. She thought summiting the mountain a second time would make her seven-year-old daughter proud of her and redeem her failure from two years earlier.

Whitely had planned to lose 100 pounds before the climb. She hated herself for refusing to say no to pies, cookies, candy, and chips. When she tried on her two pairs of hiking pants they wouldn’t fit over her thighs. Ashamed and embarrassed, she found a seamstress in the village to combine the two pair into one.

After a 10-hour hike on the second day, Whitely regretted her decision to tackle Kilimanjaro. Lying in her tent, exhausted and nursing aching muscles, she could hear the porters speaking her name and roaring with laughter.

As Whitely lay there, her regrets turned to anger. She didn’t belong on the mountain, but she would show the porters. She whispered to herself, “Never judge a girl by her blubber. There’s no way I’m quitting now.”

On the fourth night, Whitely’s group camped at 16,000 feet, a six-mile hike from the summit. At 3 a.m. they set out for the summit. With a mile to go, Whitely had a pounding headache, felt nauseous and was gasping for breath. Her thighs burned with each step, and she could barely put one foot in front of other one. It was -10 degrees, the water bottles were frozen, her mouth was dry, and she badly needed water.

Whitely could not lie to her family again. She was the last hiker to summit, but Whitely reached the 19,343-foot peak a couple hours after sunrise. The other climbers and the porters were waiting for her and cheering for Whitely to finish – none of them thought she could. The porters no longer called her Mama Kubwa. They now referred to her as Unaweza, Swahili for “You can do it.”

Today, Kara Whitely is a motivational public speaker and American Hiking Society ambassador. She has written for Redbook, Runner’s World, and Weight Watchers magazines. She has appeared on Oprah, Good Morning America, and is a National Binge Eating Recovery Advocate for the Eating Recovery Center. She continues to do battle with her weight.

“I had abused food for a year and now I had to carry the results with me up the mountain,” says Whitely of her Kilimanjaro climb. “I wanted to blame everyone and everything else for my situation. But I knew who was to blame. With each step I took, my feet dug deeper into the scree, making it more difficult to move. Every muscle in my body ached. I had a choice: stand still or keep going. Going back was not an option.”